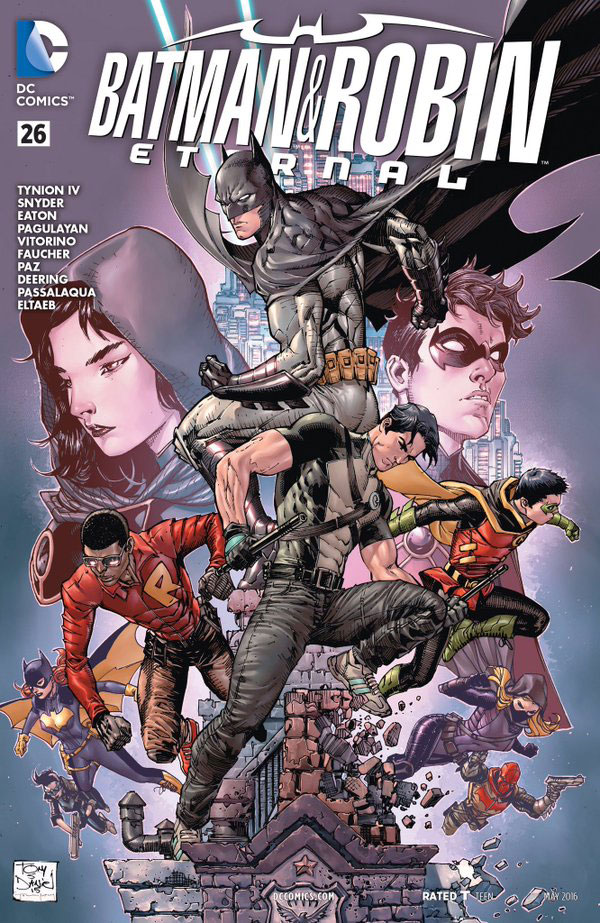 The final confrontation is here — Harper Row vs. Cassandra Cain. In the eleventh hour of Mother’s plans, Harper has a decision to make: help defeat the villain and return with Dick Grayson to Gotham City, or kill the other Bat sidekick responsible for the death of Miranda Row, Harper’s mother. Who lives and who dies?

When Batman and Robin Eternal was first announced, it was promoted as a story primarily starring Dick Grayson, Harper Row, and the returning Cassandra Cain. And truly, I’m not sure that’s entirely the case looking back over the last 26 weeks of story. Of course, there has been critical moments in the series involving Jason Todd, Tim Drake, Azrael, Midnighter, Spoiler, even Cullen Row. But the heart of Eternal — that doesn’t belong to the Robins at all, it turns out. Dick Grayson moved the plot along, true, but the real heart? That’s always been in the dance between Cassandra and Harper.

In a storyline so engaging it actually got me to coin a ship name (“Casper”) for the very first time in my life, Cassandra Cain and Harper Row commanded most of the last 26 issues for me, and #26 is no exception to that rule. In fact, some other stuff happened, but let’s be honest. Anything compelling here from head writer James Tynion IV, as he wraps up the series he shared with a suite of other Bat-men and woman, had to come down to these two.

And Tynion doesn’t disappoint. Opening the issue with the true, in-depth origin of Bluebird herself, the writer has given Harper the sort of grounding that the character has needed throughout her enigmatic career since Batman #1 way back in 2011 (Truth! Look back. She’s right there.). And that grounding, appropriately enough, is her mother. That Cassandra’s Mother orchestrated her violent removal from Harper and Cullen’s lives by using Cass as a weapon — and did so in the course of dealing with an undercover Dark Knight himself — gives Harper’s motivations a twisty opportunity for depth that every Bat character worth her salt needs.

But the real lesson Tynion lays out isn’t strength born of tragedy. It’s strength born of a foundation of strength. And that’s what makes Harper so much like the original Robin, Dick Grayson himself, and quite honestly, a more compelling character to me than the rest of those Robins featured throughout the series.

While this issue sadly doesn’t finish with the artist who began the series (I imagine Tony Daniel is already hard at work on his first Justice League Rebirth arc as we speak), the penciller/inker teams here deliver pretty effectively. And that’s not simply in individual terms, but as a whole. With four combinations finishing out the last 38 pages, you’d worry that it would become a hodge-podge of styles, but for the most part, artists were curated well, so that one had to look pretty closely to see where one ended and the other began. Mostly.

The standouts are the teams at beginning and end, with both Scot Eaton/Wayne Faucher and Geraldo Borges knocking their sequences completely out of the park. Both sets of pages beautifully convey the emotional content of the confrontations, first Harper with Cass and then later, Harper with Batman himself. In fact, Eaton especially is able to do so without the scene feeling static. So when action ensues in the moment of Harper’s ultimate decision, it doesn’t feel like a seismic shift. Things were tense and moving that way already.

Pagulayan and Paz continue that sense of the action with a particularly beautiful two-page spread of the rest of Gotham’s heroes coming to assist Grayson in the critical moments. It’s really only in Vittorino and Deering’s segment that detail and emotion seems to fall apart. Which is a shame, frankly, as they are responsible for not only concluding the third act of this long affair, but also beginning the emotional content of the aftermath. And it’s just not there — amid stiff bodies and flattened faces — by comparison to what follows with Borges’ inspiring epilogue.

There’s a lot to love about this series, and while I can’t say I was tuned in to every twist and turn with the lot of the Robin family, I have certainly been riveted with Harper and Cass’s journey to this climatic moment. Seeing James Tynion IV moving on to helm Detective Comics with Batman and Batwoman — and a few of these familiar faces — couldn’t be more perfect a leap. My hope is we’ll see Eaton and Borges getting similarly fit assignments in the coming months with Rebirth. These two artists are too talented to sustain with partial issues or fill-ins.