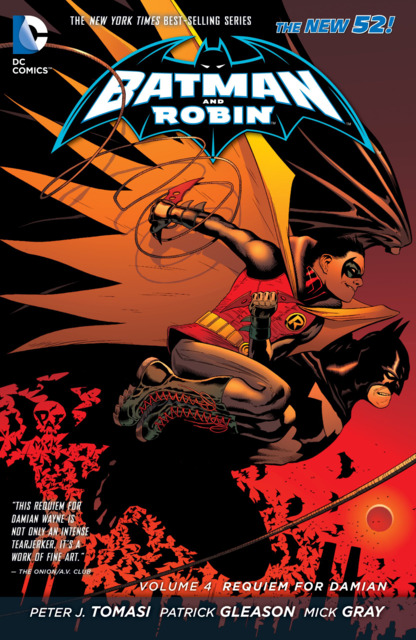 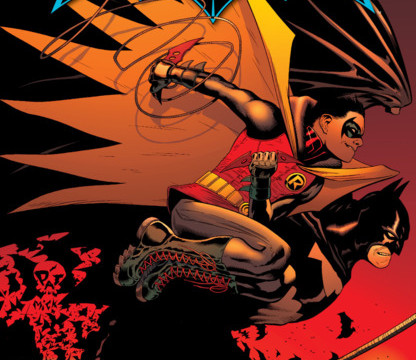 This one is gonna break your heart.

Peter J. Tomasi and Patrick Gleason examine the aftermath of the death of Damian Wayne in volume 4 of Batman and Robin, looking at the impact on the Bat family and how Batman is coping (or, rather, not coping) with the loss of his son. Tomasi absolutely kills it in this volume, delivering emotional issue after emotional issue without ever pandering and going for what I would consider to be cheap shots to get an emotional response from readers. Tomasi uses subtleties and guests stars that each bring out a different aspect of Bruce’s personality to show the turmoil he is going through in this collection. The Bat is broken, as are Alfred and the rest of Bat-family, and it is going to take a long time for these characters to heal. Tomasi examines their grief, and issues that arose during Death of the Family, with some of the best writing he has ever done. This collection starts with the “silent” issue, which was my favourite single issue of 2013, and the quality stays high from start to finish. Tomasi introduces Carrie Kelley into New 52 continuity and she brings an interesting dynamic to the table as a friend of Damian that Bruce knew nothing about. Damian’s presence looms over this book, and Tomasi does an excellent job of putting Damian in every issue as a character that sometimes never appears. Even though he isn’t there, he is still the co-star of this book and the anguish his death is causing Batman is palpable. Every parent’s worst nightmare is to lose their child and Tomasi injects all that pain and fear into this book and I’m not ashamed to admit I broke down more than once in this collection. Tomasi writes this situation exceptionally well and readers looking for an emotional payoff after the events of Batman, Inc. will find it in this collection.

Patrick Gleason and Mick Gray bring their A game to this collection and deliver some of the most powerful art in their careers. Issue #18 is a masterpiece and the quality does not slip from there. There are a few pages when Cliff Richards assists on art duties that flow is broken a bit, but for the most part Gleason’s pencils are rock solid. He and Tomasi are in complete storytelling sync and a nice perk in the hardcover is seeing some of the script and line work from issue #18. This extra highlights how much storytelling Gleason is involved in and how this team of Tomasi and Gleason truly is a partnership that works to tell a cohesive story. This collection is filled with raw emotions and Gleason handles it effortlessly. Bruce becomes more weary as the collection progresses, slipping deeper into grief and all-consuming madness and it shows in the artwork. Every emotional beat is nailed by this art team and they do not ever falter when showcasing the gut wrenching emotional Hell Bruce Wayne is going through. This collection drove it home even more for me that Gleason is one of the best artists in the DC Comics stable and his work on Batman and Robin has been simply superb.

Batman and Robin Volume 4: Requiem for Damian will hit you like a hammer with more emotion than most creators are ever able to convey. The loss of Damian is still affecting Batman storylines to this day, and will for years to come. These issues deal with the immediate aftermath and raw emotions that came with it, and Tomasi and Gleason are astounding in their portrayal of a grieving family. This is superhero comics at it’s best, and the Requiem for Damian is not to be missed.