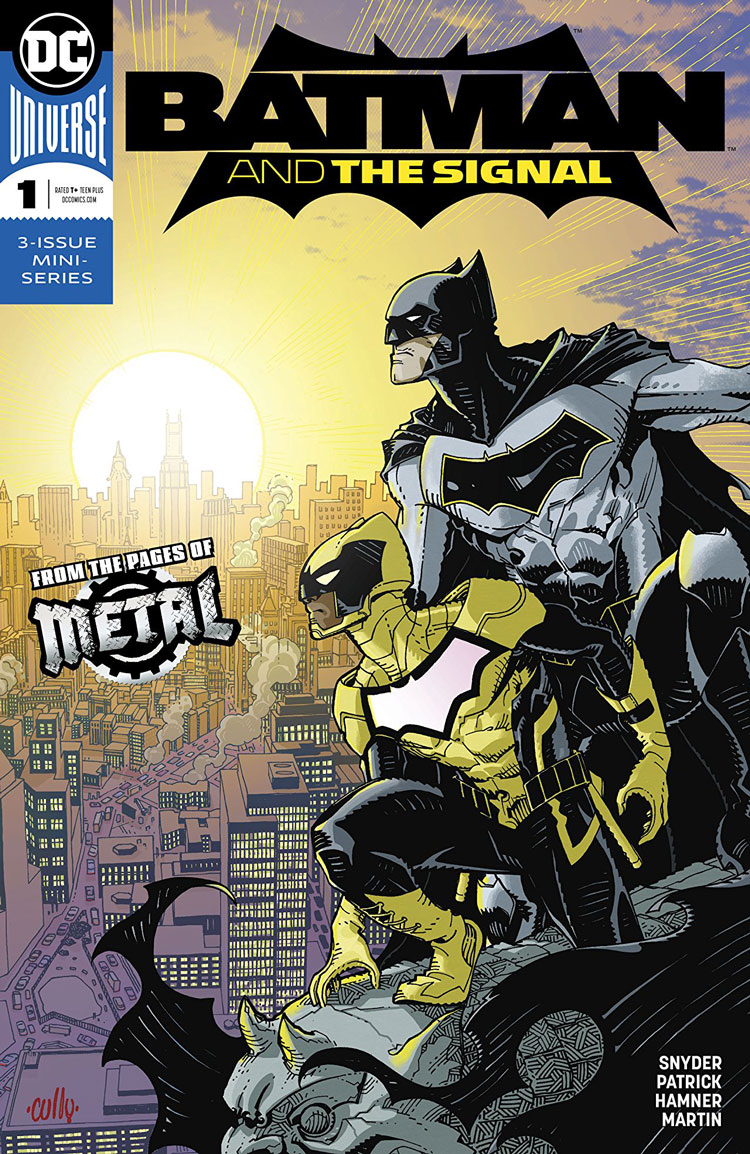 One of the newer members to the Bat Family, Duke Thomas, has had an interesting set of years in his existence as a character.

Starting from the bottom as a young citizen of Gotham during Scott Snyder and Greg Capullo’s Batman “Zero Year” event, he’s progressively increased in prominence around Gotham through different titles. The main Batman title, continuing the journey in We Are Robin, featuring in his own backup stories in All Star Batman, and a character shift in the prelude to the Metal event in Dark Days: The Casting… Duke Thomas has quite the history in the world of Batman and this dazzling number one hits a home run for a relatively new character.

Batman and the Signal begins with doubt. Patrick and Hamner assemble the Bat Family, save for Bruce, for a meeting and we see where Duke believes he stands in the family. At the head of the table, you can see him in his yellow outfit amongst the rest of Martin’s colors defining and giving each of the Bat Family their own personal signature.

Duke is on the outs because he’s fundamentally different than the rest of the family, and Patrick understands this. There are some real world implications of Duke’s character and his new found status. Being African-American in a workforce such as the Bat Family imposes a lesson Black people face while on the job and being in the real world.

We have to be twice as good to be on the level of our peers and that lesson is amplified for Duke — and rightly so! A Black teenager that is a meta-human, a curious case among an already interesting bunch of warriors and geniuses, putting him at odds on several different levels in this new world he’s in.

The opening monologue from Duke clarifies where he stands as a character with the seeds of the internal conflict for the three-issue arc in the back of his head. He doesn’t think “The Signal” will last but there’s no time to dwell because Snyder and Patrick have given Gotham a new lease on life in the morning time.

Hamner and Martin are fantastic on penciling and colors respectively. Hamner gives each and every person individuality and doesn’t skimp when it comes to showing the flow of battle between Duke and a new enemy called “The Null”. Martin has the more fantastically elements blend into the streets of Gotham well as the negative space of Null’s powers and how it spreads out around the environment and infects it with black and blue.

Patrick has a handle and understanding of Duke in the field. He analyzes and pieces together the threat and puts what he knows to good use. It might not always work and be the most efficient course of action, but he’s not without challenges and the experience comes with the line of duty. The Signal as a title is reminiscent to Wildstorm: Michael Cray in how they’re handling Black protagonists with powers beyond their control and how they put them to use.

The aesthetic of Duke’s ability is shown through Hamner taking a panel to show the trigger activating and another to show the power through a filter that Martin colors with warmer colors making the panel almost Instagram like. Even through combat, Duke is understanding and applying what he knows to the situation and it doubles for the reader to understand his powerset that only got a preview during Dark Days.

Gotham itself continues to play a part in the story at large with a major location being unveiled with a new character that has ties to the recent bout of daytime related events in the city. The time of day makes all the difference for this title as citizens and mainstay supporting characters remark on the nature of what Gotham City is suppose to be during the day (safe from villains) and the recent increase of teen metas hits close to home as it’s revealed Duke’s presence has something to do with it.

Patrick adds to the building blocks that We Are Robin started and finds a home for some of the supporting cast that, like Duke, really began to flourish during that era. It’s nice to build some continuity of where Duke’s been and a supporting cast made up of new and existing characters for his corner.

Hamner is excellent on art with the cast of characters all uniquely diverse and varied with environments to match. The characters themselves match Patrick’s writing, ranging in emotion with the story beats, and Martin helps to isolate characters of focus by generalizing the crowds around them with black or letting them be a part of the panels. The lettering from Bennett is used stylized sparingly for the bolder and more hard hitting moments but is always around and subtle for moments when characters whisper or are conversing.

Batman and The Signal #1 is a book that introduces new comers to the sunny but mysterious world of Duke Thomas and Gotham by day. For long time readers and people familiar with the character, this is the next logical evolution for the child that helped save Batman during Zero Year back in 2013. Since Duke’s inception he’s climbed the ranks of both Gotham street life and the high rises where the rest of the Bat Family thrive.

Batman and The Signal is uniquely made for Duke given the nature of the mystery and the position Patrick has set up for the young hero. What started with Snyder and continued on with Bermejo and King is all found here and it’s a brave new world for the Bat Family Hero that isn’t quite sure where he’s going to land.

Starting off the new year with a book led by one of the top Batman scribes and letting a writer of color lead the charge on paving the way for a new superhero makes all the difference with how Duke has come across. Patrick is a fantastic voice to have on Duke, the writing is natural and humorous, and the issues of feeling inadequate in a world full of Gods and Monsters or being something outside of the norm are very real.

Hamner and Martin have never made Gotham look more vibrant with the same level of mystery and misdirection before as the city would carry at night. Martin’s colors pack energy to the scenes and nothing is ever dulled, combined with Hamner’s pencils for this relatively grounded title characters both meta-human and not feel a part of this ever expanding world.

Batman and The Signal is a literal beacon for the type of change and diversity people are calling for and it’s a revitalized start for one of the most promising members of the Bat Family.