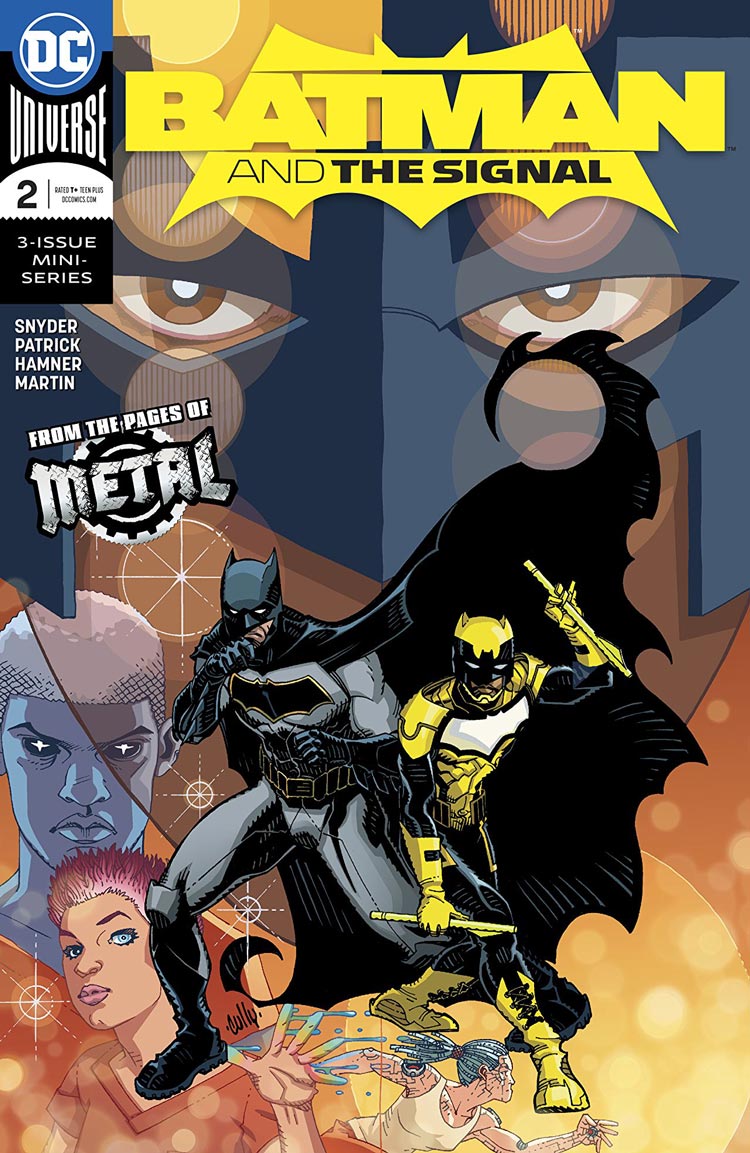 The “Afternoon” segment of The Signal’s first outing kicks into high gear as the secrets of Arkham Juvie, Gotham, and the true nature of Duke’s role in all of this comes into clearer focus in anticipation for the third and final issue.

Gotham in itself is a character of sorts in all of the Batman books and Duke follows suit with his history being intertwined with locations around the city both in the past and present. Duke narrates the opening with Gotham history facts that maintain his connection to the morning time and his upbringing.

Hamner and Martin isolate specific things in the environment to dictate the important from the mundane. The coloring from Martin is solid here as it mixes and mingles with the lighting that is a big part of the book as the sunlight and shadows are elements that Patrick plays with throughout including involving the sun and darkness into the story elements expanding mystery involving our protagonist.

Picking up from the cliffhanger ending of the first issue, Duke is caught beneath Arkham Juvie with three fresh faced meta-humans getting the better of him. Patrick juggles a lot of voices and their respective roles in battle here. Having Riko and Izzy as a support system while Duke is in the field gives them all some added growth from their We Are Robin days and adds to their relationship as friends and with Duke and Izzy’s relationship.

Hamner is good at illustrating the flow of battle with Patrick letting Duke figure things out with use of his powers on display both subtle and openly. Duke is still unsure and you get the sense he’s getting the hang of things as times goes on and the dialogue is that of a young hero learning on the fly with quips in tow to power through the situation.

Martin has a lot of opportunity to toy with the distinct color palette that this book offers with the meta-humans all having their own set of powers that isn’t so run of the mill. From Duke’s eyes to the design and styles of the villainous metas, they all benefit from Martin’s colors that incorporate reversing the pages colors when The Null is on the scene.

Patrick leaves a trail of breadcrumbs of plot through his characters with hint just out of reach about what Duke’s involvement is in all of this and while we do get some clarification, there are some twists in the story with the appearance of the big bad. Bennett’s lettering has the job of being distinctive for a host of different characters and it displays the separations between them all.

From the clear cut differences from Duke’s inner monologuing being in yellow, to the big bad’s draped in darkness. Patrick handles the cast of characters relatively easy with conflicting ideas concerning Duke and even with Duke himself. Teenage drama is ripe and not easily handled and Hamner faces and body language show it all off given how the writing goes.

Duke’s location hopping around Gotham has him fleshing relationships with different people around the city for his own take on the typical Batman related relationships. Duke isn’t Batman and Patrick writes our lead as a teenager just trying to do the right things while trying to figure out the bigger mystery hanging over his head. Utilizing his powers, sight is a big draw that fits into the detective side that slowly illuminates the nature of this mystery and the scientific basis behind it.

Duke’s history up to this point comes into play here and for long time readers of the character, this is a great thing to see. Being different is what sets Duke apart from the Bat Family and that goes down to the relationship he has with Batman. He’s doesn’t give the typical Robin responses and questions to Bats and demands answers if he thinks something doesn’t sit well. Batman and The Signal has been relatively Batman-lite but as the pieces begin to form…it could be time for the pair to end the mystery that has Duke at the center.

Batman and The Signal continues on by weaving in Duke’s past and present with Gotham for a tale that wouldn’t work with another member of the Bat Family and that gives the series its own specialty with a cast and setting that call upon different shades of Gotham we don’t typically see. In the sunlight, Hamner and Martin give Gotham a different identity than the night and the dangers are all still there for Duke to be busy with.

With one issue to go in the mini-series, the mystery of Duke Thomas and the meta-humans comes into focus with a villain that has the usual motivations we’ve seen time and again. With the climax of the story here, issue three has everything it needs to conclude Duke’s first outing on a high.