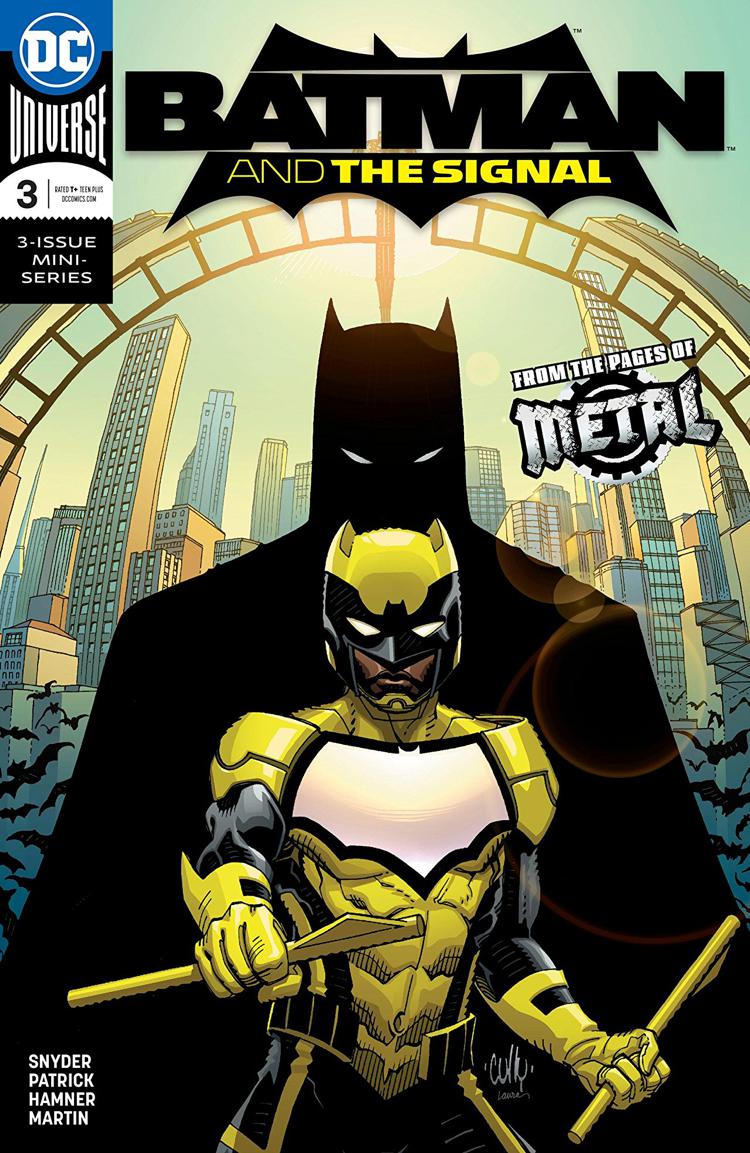 “Dusk” has set over Gotham City and the final chapter of The Signal’s inaugural adventure as Patrick and Snyder bring it all together for a finale that delivers and sets the stage for Duke’s future in Gotham with some questions waiting in the wings.

Picking up immediately on the heels of the rise of the Metahumans in The Narrows, the Bat Family proper are all doing their part to combat the increase of Metahumans of all shapes and sizes. Hamner has a lot to play in the opening pages, designs aplenty with the new Meta’s on the streets as the sun begins to set. Nightwing, Batgirl, Red Hood, Damian, and Batman aren’t lost in the shuffle even with the detailed and crowded panels with all manner of Meta’s in the panels. Martin’s colors are fitting for everyone familiar and unfamiliar to the panels, Meta’s are all over the pages in different shapes and sizes with Martin’s colors and Hamner’s designs giving individuality to each new face alongside the Bat Family.

Patrick remains a consistent voice for Duke and continuing his relationship with Batman specifically. Finally pairing the two to close out the miniseries, Duke’s thoughts and feelings are at the forefront in how they correlate with the current adventure coming to an end. Patrick’s building blocks for Gotham by Day come to a head with the mysteries he’s presented throughout the miniseries and calls upon why this is a Duke Thomas specific adventure and sizes the young Hero up to solve the mystery connected to him and him alone. With numerous titles and natural progression under his belt, The Signal has been elevated firmly into a new status and Patrick sells it with utilizing his talents and specific connections to other DC Universe titles and events. The supporting cast even gets a moment to shine and does their part in a moment of levity before Duke enters the dragon’s lair of his inaugural big bad.

Fleshing out the Gotham by Day cast further in the form of Signal and Alex Aisi as the Batman and Gordon of sorts is great for the two and Patrick sets the relationship up for future development and stories as they face Gnomon. Martin’s colors situate the scene nicely with the locational update gets closer to the night. Gnomon debuts at the risk of some personal stakes for Duke and his immediate world. The revelations and reveals between Duke and Gnomon feel a little cliche in the way they are connected but Patrick laces their dialogue with ample mystery, tease, and internal dialogue for Duke throughout showing his resistance and the urgency to get the job done. Hamner and Martin work well together providing a unique color scheme and look for The Signal’s visionary powerset with Martin filtering panels designed to see the world through Duke’s eyes. Hamner doesn’t skimp on the action-packed sequences either, his characters and backgrounds carrying weight and filling out the areas they populate as time goes on in a fight or moving about the scenes. Bennett’s lettering is used to different effects throughout The Signal from explosions, to sound effects, whispering, and yelling.

Batman And The Signal ends with the bright and sunshine promise of some interesting and personal plotlines for this, or another creative team to follow up on down the line. This short stint acting as Duke’s first adventure as a full-fledged Hero in Gotham has all the things a short and sweet adventure needs with some of the hangups being not spending enough time with a villain that’s revealed to have a larger game at play and not quite delivering on the answers it sets up. The miniseries has ushered in a type of Hero that’s naturally gotten to this point and has worked for his time in the comic spotlight, Patrick, Hamner, and Martin have a voice and well-designed look going for Duke and his world and if this Gotham by Day is anything to go by, there’s a lot of adventure, heart, and life to be found in Gotham just underneath a different scope and viewing. Batman And The Signal ends with the promise of a brighter tomorrow for one of DC’s newest characters and here’s hoping we’ll be seeing more of Duke and his cast sooner, rather than later.