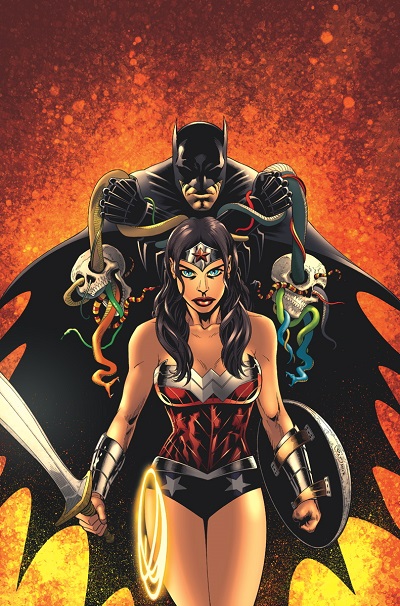 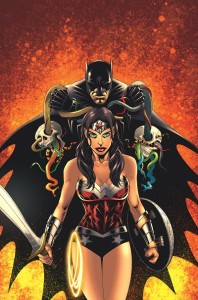 Batman enlists the assistance of Wonder Woman as the chase for Ra’s Al Ghul takes the series to the land of the Amazons.

Peter J. Tomasi has done a fantastic job of keeping this series cohesive while rotating guest stars for the past year. He does an excellent job of keeping these tales Batman-centric, while adapting them to fit the guest star as well. This issue is very much a Batman story, but set in the world of Wonder Woman so it has a very unique feeling. This is not a world we have ever seen Batman in, and that alone is exciting. With the other Bat titles entrenched in Gotham, the change of setting is very welcomed and immediately disassociates this series from the rest. Tomasi is paving his own road with this one and he is doing one hell of a good job. He keeps the tension high in this issue from the first page to the last, as the stakes are huge and this is not a welcoming environment for Bruce. While not a lot is resolved in this issue, the journey from start to finish is entertaining to read, increasing the overall tension in the series and drama of what Ra’s has planned for Damian. For readers who have stuck with the series from the beginning, the stakes are getting to be nearly unbearable as Bruce continues to be driven by grief and the desire to let his son rest. This title is the emotional Bat-book, and the one you can always count on for feels. Tomasi deals with emotion brilliantly, working with Gleason to show the wide range of emotions that boil to the surface in this story rather than hitting readers over the head with them. Tomasi is at his best when he’s letting silence speak and characters reflect on the casualties in their lives, and there are a couple of these moments in this issue that are done so very well. Some readers may be frustrated by the pace of the series based on the events of this issue, as the status quo remains relatively unchanged, but the character inspection is worth the ticket to ride.

Patrick Gleason is in obvious sync with Tomasi, and the two tell a great story together. I’ll admit Gleason’s take on Wonder Woman was almost jarring at the outset of the issue for me, but as the story continued it fit, and I found it totally worked. His skill at expressing emotion is on display throughout the issue, and he captures the calculated madness of Ra’s Al Ghul very well. His work is consistent, as per usual, and he and Mick Gray are simply a killer combo. Colourist John Kalisz brings rich tones to this issue and his work on Ra’s, in particular, really adds to the character’s madness. This is a skilled art team that has crafted an excellent run so far and, should they ever move to a different title, their successors will not have an easy time living up to the work this team has put down.

Batman and Wonder Woman #30 isn’t a game changer for the series, but it is a very strong character inspection and, if nothing else, it’s another chance to read Tomasi and Gleason working together. The quest continues next month, and I’m excited to see where this team is going with this story.