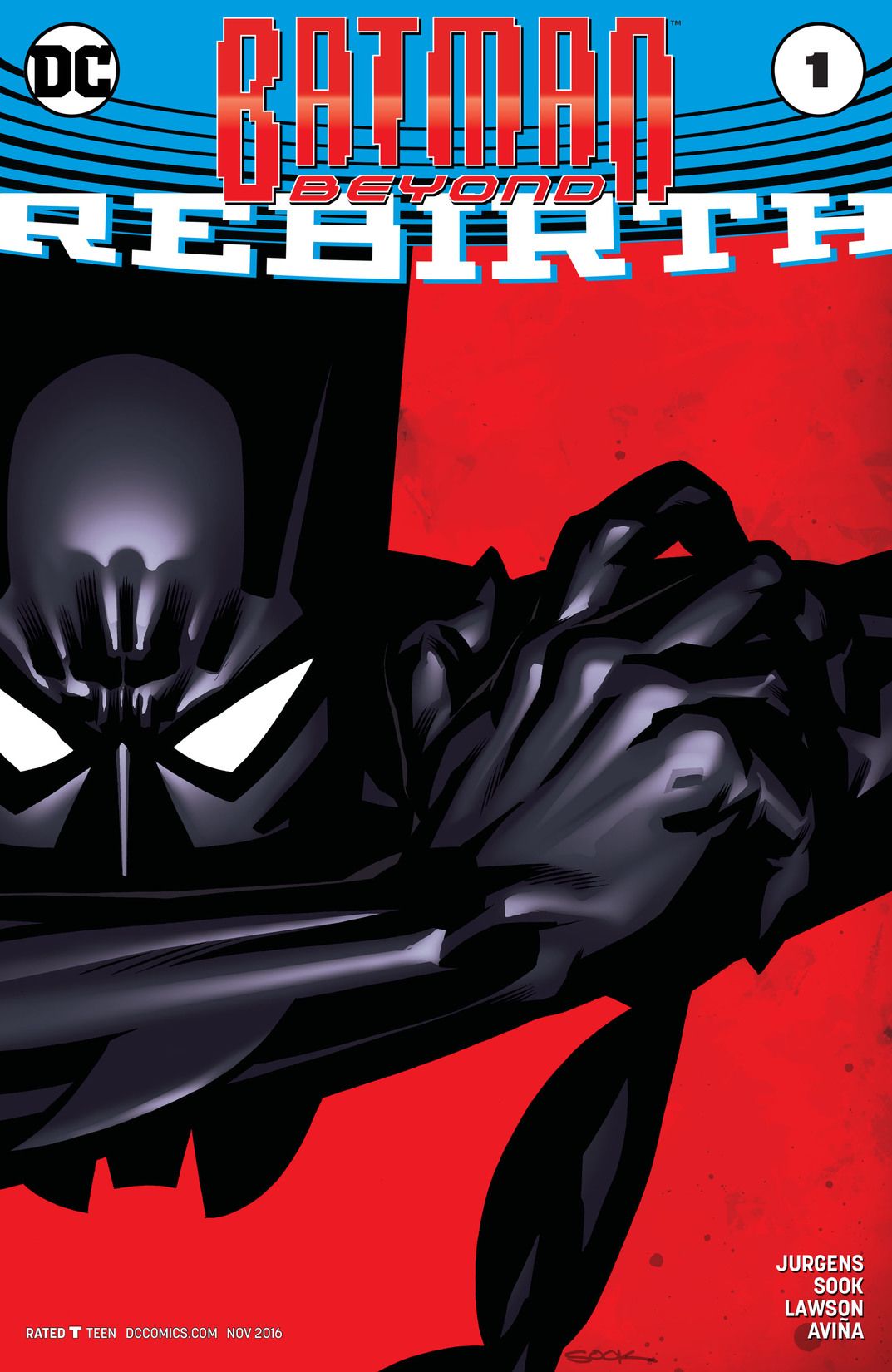 The Jokerz are trying to take over Neo-Gotham and there’s one man who can stop them. Terry is back in all his retro-90s-future glory in this exciting issue of Batman Beyond: Rebirth!

Jurgens started this new run of Batman Beyond well, establishing some basics for the new reader as well as giving the new arc a great start. Terry is relatable as ever. I always love seeing Max and Matt, even if they were only around for a few moments. Barbara as the commissioner is fantastic.

The future lingo is campy and hilarious, but endearing in a retro-future sort of way. A certain scene with Dana feels a bit too cliché and damsel in distress-y for my tastes, but with the fun though easily ascertained plot twist at the end of this issue, I’m sure Jurgens will come up with something more fresh than a save the princess challenge.

Sook has done a marvelous job. The backdrops of Neo-Gotham are beautiful in a very Zenon meets Total Recall way. I’d like to point out that Sook actually knows how to draw women wearing clothes as well. There are a lot of artists that strangely don’t seem to understand how shirts work with boobs, but Sook is not part of that group and that makes me over the moon. I love the smaller pieces he created in the issue, like the bat stuck in the clock or the reflection of Terry in Barbara’s glasses, and I feel the coloring by Jeremy Lawson makes the pieces even better.

While Sook’s art and Tony Aviña’s coloring work towards the end of Escaping the Grave Part 1 is gorgeous, I would have to say my favorite scene is probably Terry’s entrance splash page colored by Lawson. It’s an excitedly written scene. Terry’s whole body is so detailed. Neo-Gotham in the background is beautiful. The way the letterer, Travis Lanham, chose to place the credits on the back of a bus seat is intriguing. This page grabbed me from the get go and made me want to read more.

Batman Beyond Rebirth #1 is a good read. I had never actually read any Batman Beyond before this, I’d only watched the show as a child, but this makes me want to go back to the earlier comics and read more while waiting for the next issue. It’s as cool as the television show is, and if you are a fan of the old Batman Beyond show, you’ll definitely love this. I highly recommend it.