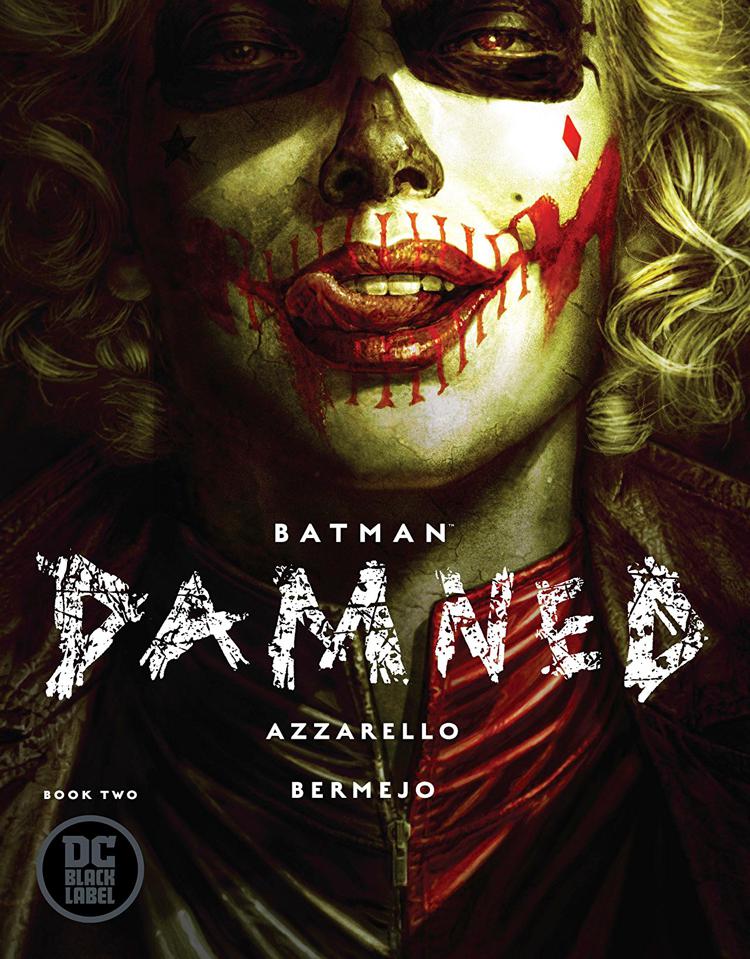 “What don’ kill us…eats us alive.”

53 pages of anything Brian Azzarello and Lee Bermejo is heavenly, even if our title character is in the purest of hells. Living up to it’s name, Book 2 of “Batman: Damned” challenges the Dark Knight mentally thanks to hurtful memories of his childhood and physically when the Batman has to prevail in saving the citizens of his city, no matter how demented. The true observation lies within how the Caped Crusader rises to the occasion in conquering his haunted mind, scarred body and even worse, tormented soul.

After witnessing the desecration of a holy place courtesy of The Joker, Constantine and Batman not only begin to solve the mystery behind Joker’s death but also what demons are involved with his possible resurrection. From Azzarello’s perspective, “Batman: Damned” showcases a broken Batman. While this may be old news to some long time readers of the character (being a broken man comes with the cowl evidently), Azzarello brilliantly links his past as a boy seeing his mother deteriorate in front of his young eyes to the present seeing both him and his sanity deteriorate as well, even when it comes to saving the supposedly innocent. The Dark Knight has many skeletons in his closet, enough to perhaps fill a cemetery, but he hides them deep in the back with the Christmas presents to try and be the vigilante he set out to become shortly after his parents’ murder. Azzarello is giving a new life to these hidden skeletons, for better or for worse for this hero of Gotham.

Another aspect within Azzarello’s unique perspective of the Caped Crusader in this damned universe is the Batman’s interaction with the public around him, in particular the supernatural beings that confront him on this hellish of evenings. From Deadman to Enchantress to horrifyingly Harley Quinn herself, Batman literally faces death and his (personal) demons, slowly succumbing to the concept that he might be a murderer in actual disguise. What is most horrifying is that if the Clown Prince of Crime has left this earth, was Gotham actually better for it or did it burst into the flames of the damned beneath the surface. Continually breaking the barrier between hauntings and reality, Azzarello’s storytelling in this graphic novel continues to illustrate the worst within the Batman who is seen as a savior of Gothamites and questions whether or not he is capable of putting his own hurt aside to stop the hurt of others.

Lee Bermejo emphasizes the grit and despair in his renderings of Batman and his city, no matter what tale involving the Dark Knight and his mythos. From his cover to issue 2 reminiscent of his 2008 graphic novel “Joker” to buildings ablaze in front of the Batman’s eyes, Bermejo was fit to depict such a devilish existence for a hero that is constantly tormented by demons, especially his own.

Bermejo’s work never shy’s away from details, seen in the fabrics of Batman’s costume to he emotion of sadness and fear in the eyes of both his mother Martha and Harley Quinn (one of the most brilliant parallels within the entire series thus far). Between the immense detail and the almost realism seen with every ghoulish mask worn by Harley’s goons, Constantine’s lit cigarettes and Batman’s teeth gritting with absolute rage, you feel the darker path (who knew that was even possible) that not only Gotham is on after these terrifying events but also one that the Batman can’t seem to turn away from taking.

Ain’t No Rest for the Wicked

SO many questions arise from Book Two of this bimonthly series. But the biggest one is whether or not Batman will make it out alive himself and if he does, what would that cost him: His mind, his body or worse, his soul? I still say that Brian Azzarello and Lee Bermejo are a dream team when it comes to depicting the dark and twisted world that truly is Batman’s existence and with part two, they did not disappoint to bring on the crazy and tragic. See you in 2019, boys!