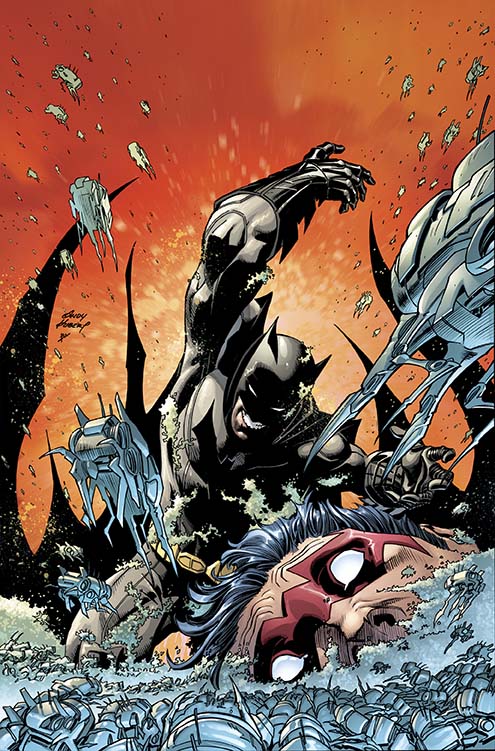 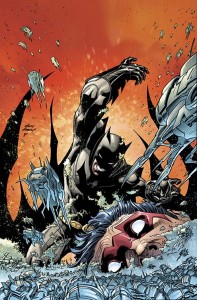 The plot thickens as Red Robin takes the focus of this issue of Batman Eternal, digging deeper into a well known area of Gotham and a mysterious subplot that hits close to home for Gotham’s newest crime fighter.

The writing team is doing a very good job of moving the focus of this weekly series to the different members of the Bat-family, using the massive cast at their disposal very well. The events of this series are happening very quickly, and simultaneously, so an examination of what is going on in different areas of the city really fleshes out this story as a whole. The team writes Red Robin well, his headstrong nature and raw emotions bringing a great angle to the cast of characters in this story. Considering the events in the Bat-world (and DCU as a whole), Tim’s relationship with Bruce isn’t exactly great right now and this issue plays on the emotions of their situation very well. Fans that have been aching for more Harper Row will rejoice at the contents of this issue as the fight is brought to her front door. Plot threads from the primary Batman series, and backups, are also brought into Eternal, making for a very interesting situation that is growing more tense by the issue. This is no longer a simple turf war and as more members of the Bat-crew are drawn into the fray, the writers are doing a good job of escalating the danger of the situation. Batman et al. do not have the upper hand in this situation at all, and the wonder of what is coming for them next gives this series a lot of life. This team is throwing a lot of curve balls right now and if they are going to keep readers on their toes to this level throughout the entire series, Batman Eternal is going to be a special series for a very long time.

Andy Clarke’s art is solid throughout this comic, with a couple of off moments balanced by some very strong panels. His style suits the tone of this series very well, with art that is less stylized than Dustin Nguyen’s in issue #4 and more in line with Jason Fabok’s work in issues #1-3. Clarke is also dealing with a different set of characters that we haven’t seen much (or any of) in the series so far, so the artist change does not feel extreme. Clarke does a good job of expressing the emotions of these characters, as some of them experience some rather extreme ones in this issue. His facial work is, for the most part, solid and he handles the arrogant nature of some of these characters very well. There is a lot of character building done through subtle mannerisms and body language, and those small touches are very appreciated. They make the characters feel natural and real, without any stiffness or rigidity. The colour work by Blond is very strong, enhancing the artwork and never amping up any colour too much. The palette used is perfect for this world, giving it a rich feeling that sucks the eyes in and doesn’t let them go.

Batman Eternal #5 is another strong chapter in this weekly series that is building itself into a force to be reckoned with. The plot threads are growing nicely and this creative team is not holding back. Threats and mysteries are flying fast and furious and they are telling a huge story befitting this huge cast. The primary criticism of a weekly title is the overall monthly cost, but when the comic is this good it’s hard to justify not kicking out the extra dough. 5 issues in, this train isn’t slowing down at all and DC’s got a winner on their hands.