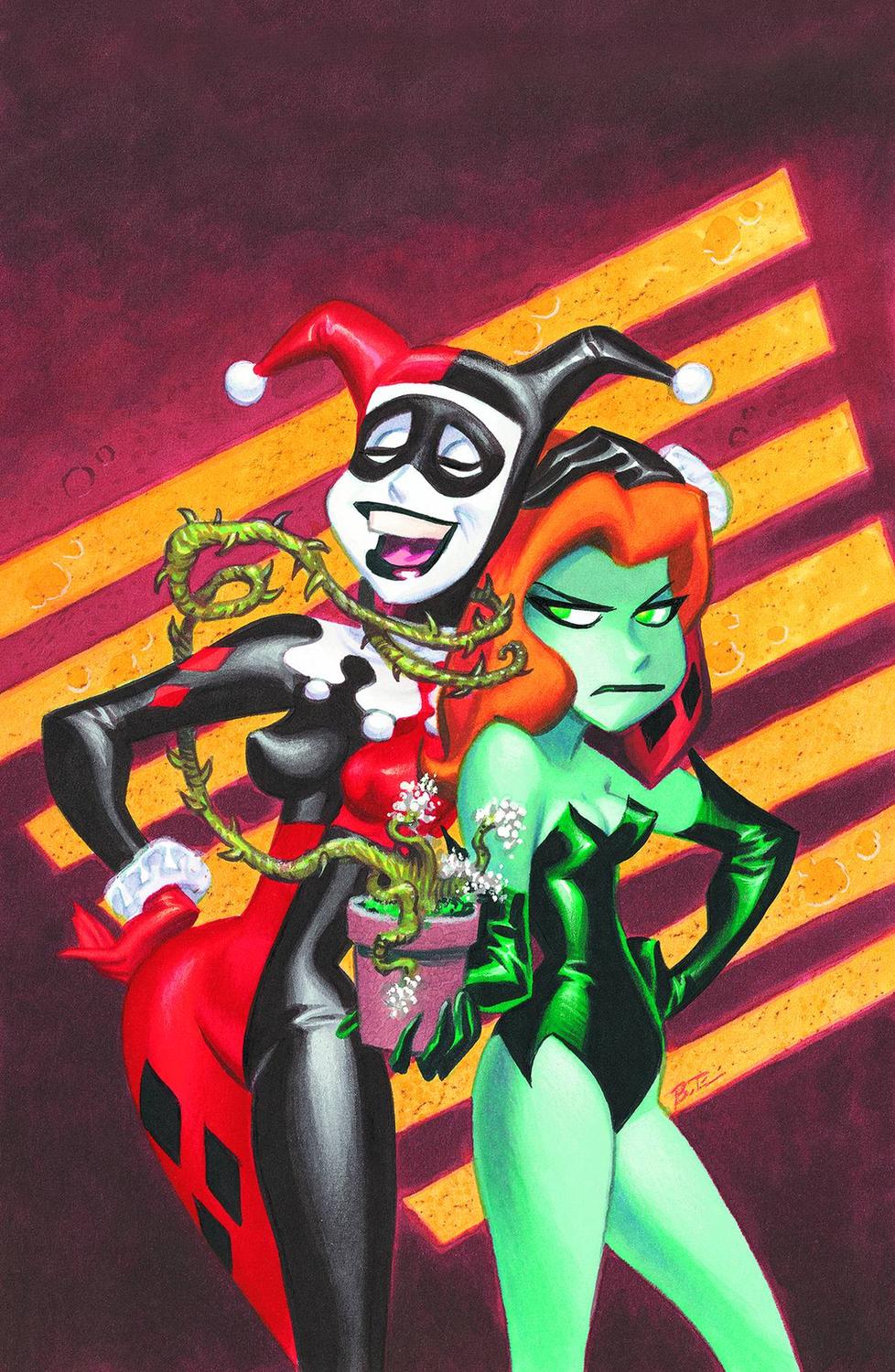 This is probably going to get me in a heap of trouble with cries of sacrilege and tomatoes aimed at my head, but here’s the thing: I’m not a fan of old school Harley Quinn. And this book kind of put the pin in exactly why.

It’s not that I don’t understand the appeal. Paul Dini and Bruce Timm introduced what is probably the strongest original character since the 1960s in comics. If the Suicide Squad film had come out two years ago, we’d all be talking about Harley Quinn this weekend instead of Deadpool. She’s got all the panache and twice the balls that dude has, in a sack, ready to whip them across your face for a laugh. She’s outrageous and funny and encourages an irresistible love that makes you want her to jump off the page into real life. All that is in this volume, in buckets.

But she’s just not that smart.

And that’s a cardinal sin in my book. To be fair, I have the benefit, in reviewing this deluxe collection, of 20/20 hindsight. I know what it’s like to read clever and self-respecting Harley, a woman who may not make all the right decisions, but owns them and isn’t emotionally beholden to anyone, even Ivy. She loves Ivy, and you certainly get that in these early stories too, but it’s the kind of love that makes me cringe like when I think about how stupid I was when I just smiled as my first boyfriend was a total dick to me. Yeah. It’s hard.

And it’s not that Ivy mistreats Harley here, so much as she has priorities that don’t take her into account beyond reluctantly agreeing to her presence. And the structure of this book as a whole aggravates that scenario. If you carefully look at the original publication dates for the stories contained within, the Harley and Ivy mini-series (from which the deluxe edition gets its name) came much later, in 2004, but features the most regressive version of the pairing. Earlier stories from 1996 and 1998 tell an entirely different story, one where Harley and Ivy are in fact a romantic, albeit non-monogamous couple, as they are today. 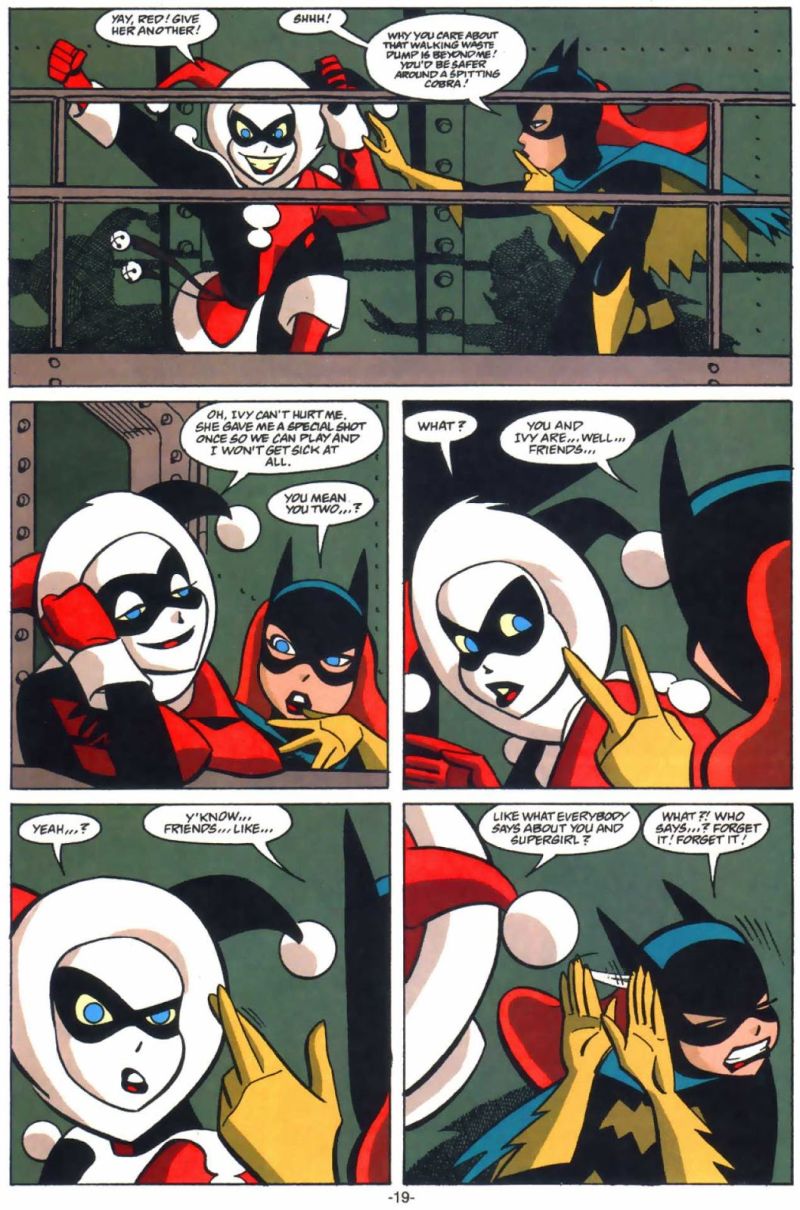 It makes for a troubling read overall, because at first pass, it seems like the pair have evolved from Ivy’s disdain and Harley’s puppy love into a full bloom of relationship — until you start realizing that the feel of each story — from its art style onward — betrays the reordering as much as the Table of Contents do. Ty Templeton and Rick Burchett’s art for Batman: The Animated Series tie-ins are necessarily less nuanced than Bruce Timm’s own later renderings of Harley and Ivy — which do have a sophistication that you just didn’t see in those earlier series.

And that’s part of what’s great about this book, seeing this initial story push the bounds of all-ages content with some real sophistication of art and dialogue without excluding or betraying any audience. I’m particularly struck by the renderings of Ivy, who feels more like a genuine force of nature in many scenes than a super-villain, and encapsulates some of the horror that controlling plants can bring. The scene where she communes with the vines is intensely sexual, and throughout the story we get to see Timm and Dini scrape the edges of horror without pushing too far into it.

On one hand, it makes me desperately want to see what these two creators could do with a fully-fledged macabre Poison Ivy tale. And then it also reminds me that we have a more “adult” looking take on Harley and Ivy in the volume’s final story, an excerpt from 2014’s Batman: Black and White, and it stands out like a sore thumb. 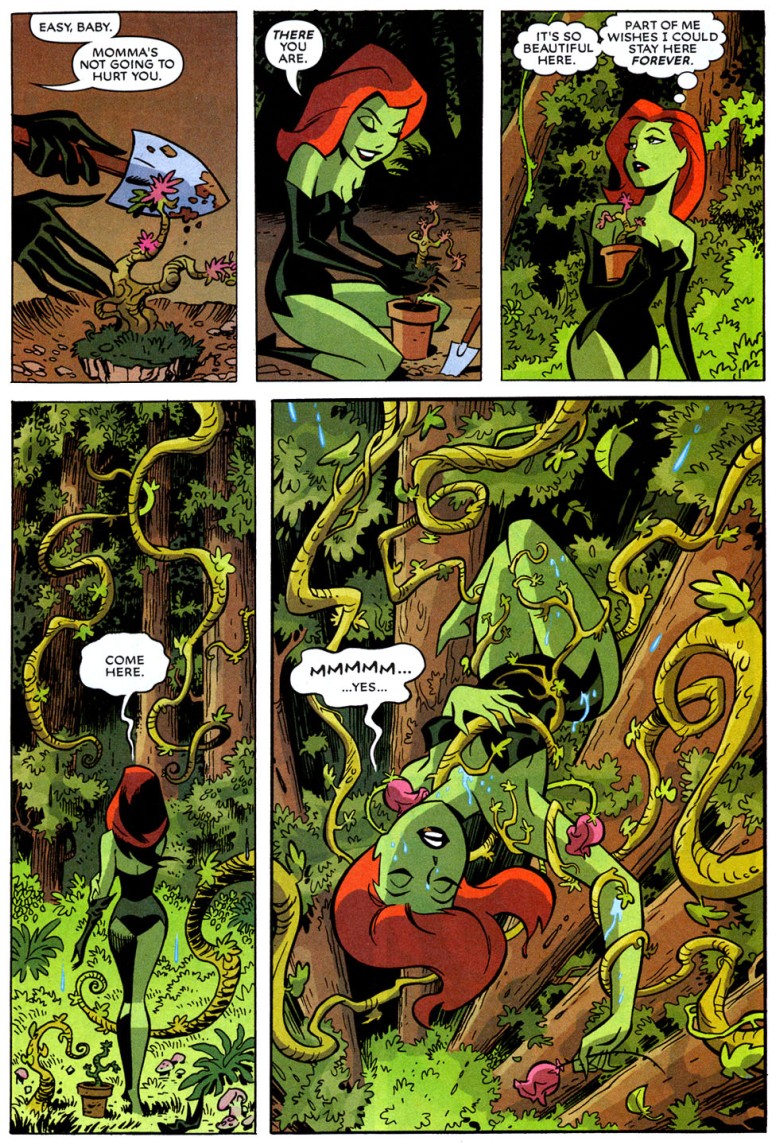 The most fun pairing, honestly, is not Harley and Ivy, but Harley and Batgirl, as the two work together to save Poison Ivy from some crazy Fox-inspired villain. Here, the chemistry feels right, and while antagonistic to be sure, doesn’t diminish either one.

What’s certain about this book, though, is that separately, Ivy captures my attention like no other in the first half and Harley endears me like she does monthly in the second. They just don’t manage to do it together, at the same time. And I kind of feel like that’s the sales pitch here.

If the modern monthlies or the current mini that Harley and Ivy are commanding are not your speed, your reaction to this book might assuredly be more receptive than mine. But if you’re looking for a relationship of equals between two stunningly original characters that have a truly genuine connection elsewhere, this collection falls a bit short.