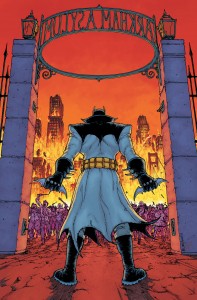 One of the smartest critical readers of comics I know insists that Grant Morrison’s Batman Incorporated doesn’t actually take place within current DC continuity. In a sense, it’s kind of hard to argue the point, as Morrison writes the title as a direct continuation of his extended pre-Flashpoint plotting. He’ll throw in a nod to a current story every now and then — a reference in Batman Incorporated #1 to Damian Wayne killing Nobody over in Batman and Robin — but it’s always in service to Morrison’s story.1

I think it’s wrong to argue that Morrison isn’t concerned with continuity, but it is pretty clear that the “continuity” Morrison is most concerned with is his own. The key element of Morrison’s pre-Flashpoint Batman was that everything that ever happened in any Batman comic was treated as being in continuity, including (or especially) all of the rainbow-colored histrionic sci-fi weirdness that Frank Miller supposedly rescued us from back in the 80s. Even though Jason Todd has been recast in the New 52 as the leader of a ragtag gang of outcast antiheroes, Morrison moves forward with his master plan and reveals him to be the new Wingman in Batman Incorporated #4. This may not have quite the same impact as when Morrison had his own version of Todd as the Red Hood running around with his own traumatized sidekick Scarlett claiming to be a new dynamic duo for a darker, faster, more violent, more media-savvy age. But no matter. If Wolverine can be a member of two teams of X-Men, the Avengers, and his own solo title all at the same time, then Jason Todd can lead the Outlaws and be Wingman, right?

Personally, I’d argue that Morrison’s project isn’t so much to ignore continuity as to transcend it — to take the elements of old stories and to put them to work retelling those stories in a new way. This focus on resonance, recurrence, and recognition make it especially fascinating when Morrison stretches continuity to its limits by jumping to the future and showing us Damian Wayne as the Batman.

And because this is Morrison, there are reversals and inversions. In this corner of the future, Arkham Asylum is still Gotham’s last hope for sanity, but as a fortress rather than a prison. While Damian Wayne and a wheelchair-bound Barbara Gordon race to find a cure for a biological version of Joker gas, a grinning “Bruce Wayne” encourages the president to destroy the city to save the rest of the country. There’s even a disturbing twist on the darkest moment of The Killing Joke.

There’s not much more I can say about the plot without spoilers — that is, if Morrison’s circular, self-referential plots can be spoiled for someone who hasn’t already read the whole thing — but there are two more components to Batman Incorporated #5 that really need to be acknowledged. First, as invested as Morrison clearly is in his own contributions to the Batman mythos, Batman Incorporated #5 evinces an admirable willingness on the author’s part to throw the whole thing in the air if it serves the greater story. It’s been observed before that the bald future version of Damian Wayne bears more than a passing resemblance to Morrison himself, but if Batman #666 served as a bit of aggrandizement for Morrison’s beloved creation, Batman Incorporated #5 presents the possibility that a future in which Damian Wayne becomes Batman is a disaster to be avoided at all costs. Second, Chris Burnham’s art helps to emphasize the playfulness and dark humor in Morrison’s writing. While Burnham uses the same costume design for the Damian Wayne Batman as Batman #666, it’s a bit more apparent in Burnham’s hands how much 90s parody there’s meant to be in Damian’s pouched utility belt over a trench coat “cape.”2

Grant Morrison’s grand Batman tale may seem to be coming to a conclusion, but it’s building up steam as it gets there. I’m looking forward to seeing what happens next.

1. Note that Damian is supposed to have killed Nobody before he killed Otto Netz in the Leviathan Strikes! trade (which collected the solicited but delayed pre-Flashpoint Batman Incorporated issues that disappeared into limbo when the New 52 launched). The people Damian kills matter, but the people he kills in Morrison’s books matter more.