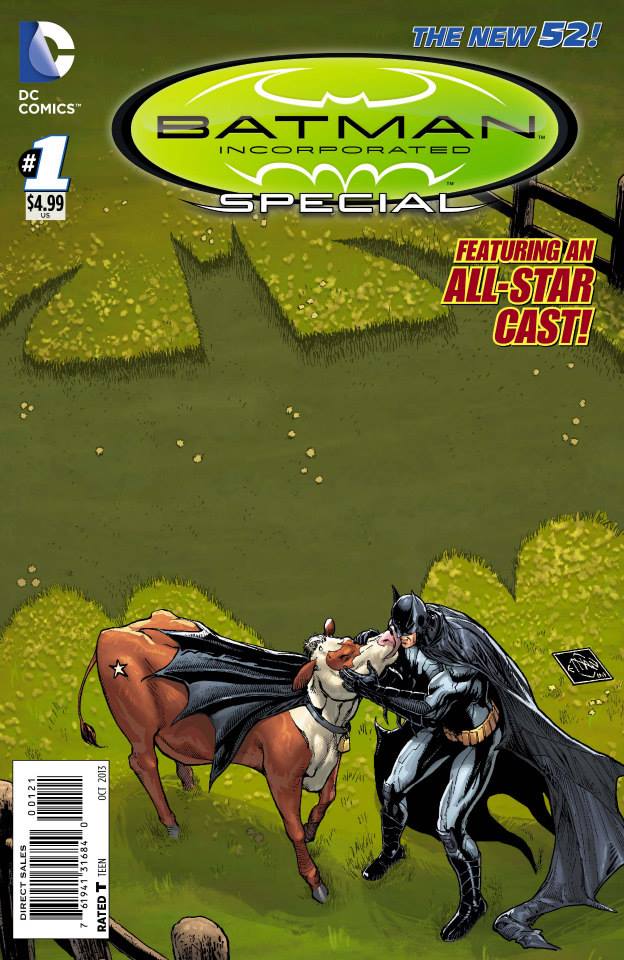 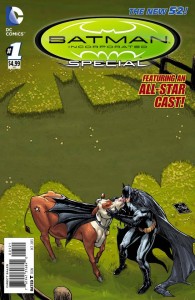 The battle with Leviathan is over and Batman has dismantled his worldwide network of associates in its wake. But it’s not like these heroes he inspired (and outfitted in some cases) just disappear, right? Time to check in on those who carry on the mantle of the bat, whether Bruce Wayne likes it or not!

Because of the nature of this anthology, we’re going to try something a little different and review/score each section separately. Fear not, number crunchers; it will all add up in the end!

BATMAN JAPAN
Written by Chris Burnham
Art by Chris Burnham
Burnham follows up his absolutely delightful issue #11 with a short tale he writes and draws featuring both Jiro and his gal Friday, Shy Crazy Lolita Canary — who frankly could become my new favorite heroine with a canary cry if Burnham keeps it up. It’s a little bit gross, it’s a whole lot tongue-in-cheek, and everything you’d want in a big action tale that blends the best of Japanese pop culture and the West’s biggest name super-hero.
The Verdict: 9.5/10

THE KNIGHT
Written by Joe Keatinge
Art by Emanuel Simeoni
This tale of what happens to a super-hero’s sidekick after he dies in action could have easily rolled over into trite, but somehow Keatinge manages to get to the root of Beryl and the former Knight’s relationship in only seven pages, with the latter already well into the ground. Since the element of build-up and surprise becomes fairly moot in a story this short, what we get is a nice introspective piece that still respects the no-nonsense attitude we’ve come to love from the Squire. And the facial expressions Simeoni captures throughout (I especially loved his treatment of the Squire’s domino mask) makes this a blessing for the eyes as well.
The Verdict: 8.5/10

RAVEN RED
Written by Nathan Fairbairn
Art by John Paul Leon and Nathan Fairbairn
A little bit sad, a little bit hopeful, this short juxtaposition of Raven cornering a criminal and attempting to help a man out on a ledge packs a lot of subtle emotion into the tale. But it’s really Leon’s noir-ish pencils and Fairbairn’s own colors that bring this story up a grade to excellent. Beautifully drawn with dynamic panels and tight, compelling angles, this story really feels like a primer for something much larger, in the very best sense.
The Verdict: 9.0/10

NIGHTRUNNER, DARK RANGER and EL GAUCHO
Written by Mike Raicht
Art by John Stanisci
A little bit jumbled, a tad confusing, and not nearly as well-focused on character as the other installments within this anthology, this story probably suffers from being too big for such a little space. The villain is a bit out of nowhere, with dialogue that indicates his importance rather than showing it outright. Stanisci’s linework is well done, particularly on Nightrunner, but the color palette and need to jam so much into such a confined space really harms the flow of the story.
The Verdict: 7.0/10

BAT-COW
Written by Dan DiDio
Art by Ethan Van Sciver
If any character coming out of Batman Incorporated deserves her own spotlight, it’s Bat-Cow. Nearly every appearance the so-called Battlin’ Bovine has made to date has been a tearjerker or inspired an ear-to-ear grin, and this one is no exception. DiDio’s minimalist story is perfect for the character, but the real shining moment of this segment (in fact, the entire book) is Van Sciver’s ultra-realistic rendering of Damian’s dear four-legged, four-uddered friend. She’s sweet. She’s spooky. She’s maternal. And the best part? She makes you smile. I adore you, Bat-Cow.
The Verdict: 10/10

With a lovely goodbye from series scribe Grant Morrison after an impressive seven year run on the adventures of the caped crusaders, Batman Incorporated Special #1 is a sincerely satisfying read, and well worthy of filing alongside those issues penned by the grandmaster himself. A delightful combination of heartwarming, funny, melancholic and classic super-hero tales, this special is a testament to the world of characters Morrison re-opened and revitalized for Batman. Hopefully, this will not be the last we see of any of this brood.