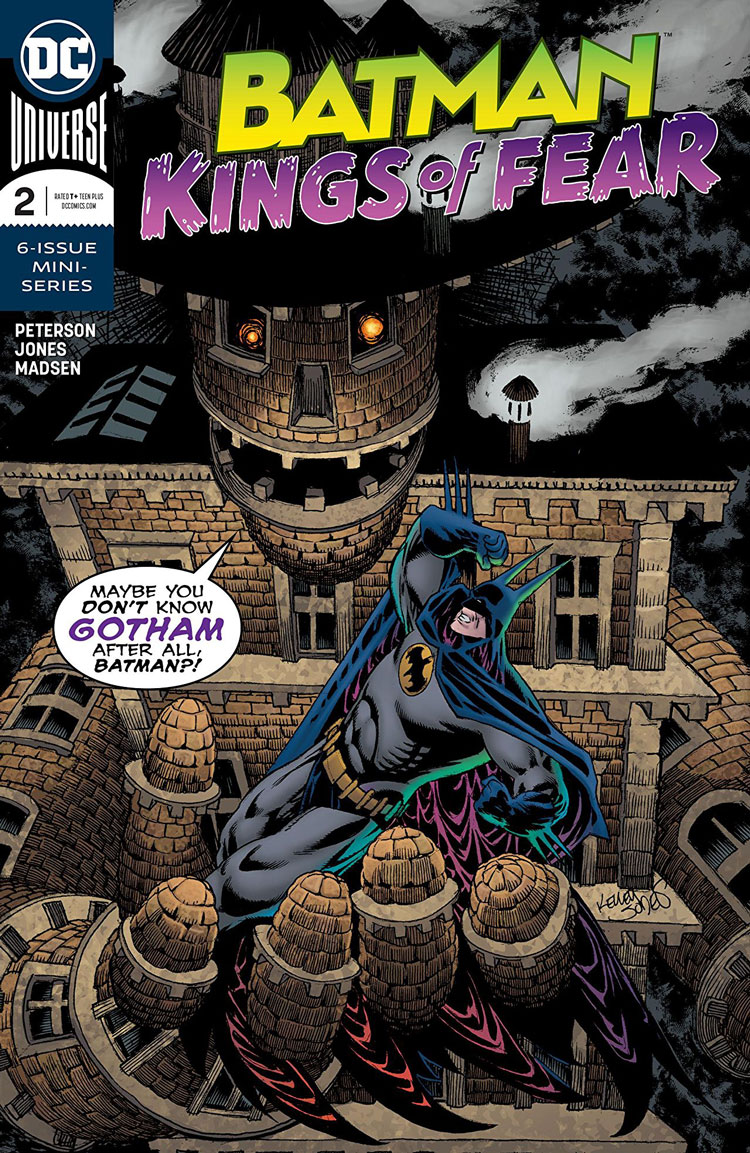 Class Is In Session

Part two of this six issue arc is already setting up Scott Peterson and Kelley Jones’ limited series to fall in the lines of “Batman Psychology 101”. A simple hostage rescue storyline becomes a complex mind game, challenging both Batman and his allies closest to him. From outstanding imagery to dialogue filled with fright, this creative team is easily becoming the prominent kings of fear when it comes to the Dark Knight.

The premise of Chapter Two is rather simple: Commissioner Gordon and Batman have to locate the Scarecrow’s hostage before any more harm comes to him or other Gothamites. While this is tame for a Batman story, writer Scott Peterson gives us insight into the mind of Batman under the influence of Scarecrow’s fear toxins: paranoia and guilt. From his exchange with surrogate father Alfred Pennyworth to trusted ally and friend Commissioner Gordon, the Caped Crusader trying to function to do this “simple” task is a journey all on its own.

Even though Batman isn’t on his “A” game when it comes to his detective mind being all fuzzy, his exchange when interrogating a man to find the hostage is both humorous and proves that the Batman is still terrifying to the average citizen, hero, villain…anyone. As Peterson’s script cements this characteristic, Kelley Jones and Michelle Madsen’s art beautifully completes this picture.

Horror Lives In The Shadows

There’s so much to digest in Jones, Madsen and Leigh’s art in this second issue. The splash page calls back to some of the most damaging moments in Batman’s life: the death of Bruce Wayne’s parents, Bane breaking Batman’s back in “Batman: Knightfall” (which is a beautiful callback to Jones’ original cover to Batman 497), the death of Robin aka Jason Todd in ‘Death In The Family’, the Dark Knight’s constant battle with The Joker seen in an homage to 1970s “The Laughing Fish”. All of these images along with the classic rogues gallery itself have effectively hurt the Batman’s psyche, resulting in Scarecrow’s fear toxins taking a huge toll on our masked vigilante.

Jones constantly and masterfully implements horror within his portrayal of Batman, from the elongated ears to the exaggerated cape (in one panel it even wraps in the shape of the original “flying boomerang” which would become the modern batarang). What makes this issue put the “shadow” in shadow of the Bat doesn’t even involve the look of Batman. The city that birthed the Dark Avenger shares his insignia in the brick walls and the immediate fear of criminals in an alley. There’s even a panel where an actual symbol of impending doom is molded into a wall from an array of bullets that (of course) missed the Batman.

Whether or not Scarecrow is the right person to try and dig into the troubled mind of the Batman, Jones and Madsen will be the perfect art team to illustrate this horrifying and exhilarating journey to understanding this iconic hero.

He’s Got Issues, But You’ve Got ‘Em Too

Why I am such a fan of Batman tales is because he’s human and suffers emotionally and mentally like everyone else does at some point in their life. Did we all get our spine broken in two by a steroid filled rogue? Probably not. However, anytime a creative team tries to peel back the many, many layers of Batman’s mind, I’m all in. Can’t wait for issue 3.