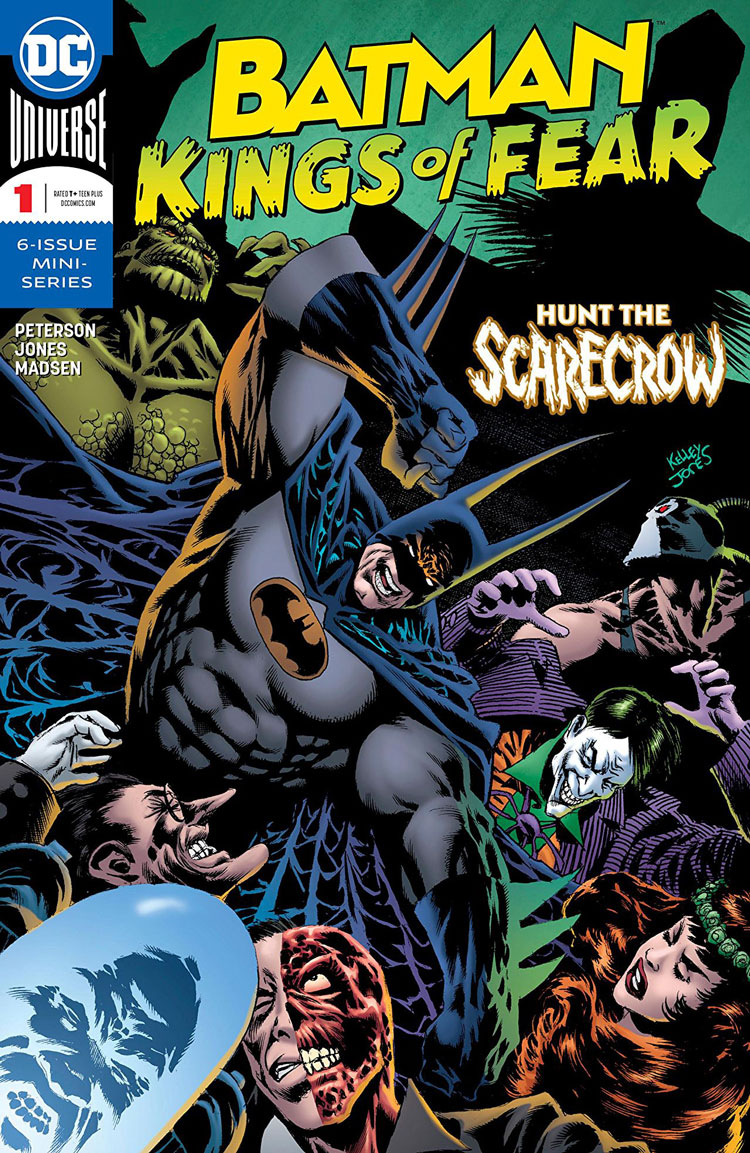 A Life Built On Fear

Batman’s Rogues Gallery is always an adventure to unpack, especially when it results in learning more about the Dark Knight himself. What better duo to dive into the troubled psyche of both Batman and his villains than two veteran creators of the Dark Avenger: Scott Peterson (Batman: Gotham Adventures) and Kelley Jones (Batman, Batman: Gotham After Midnight). Part one of this six-issue mini-series sets up a haunting trip through what makes the Batman so terrifying and what truly frightens the man behind the cowl.

The Walls of The Batman Man Cave

After Batman brings The Joker back to Arkham Asylum, the villainous inmates escape, leading to the Dark Knight falling prey into one of his worst nightmares courtesy of the Scarecrow.

As Batman drives Joker back to Arkham in the Batmobile, writer Scott Peterson gives such a layered discussion (well, almost one sided thanks to chatty Joker) between the Clown Prince of Crime and a more sullen than usual Caped Crusader that already attempts to understand the inner workings of Batman’s purpose as a vigilante. Joker and Batman have done this good vs evil dance enough times to know there are dark corners in Bruce’s mind that even a demented soul like Joker has difficulties comprehending.

Although he puts the crazies away in the walls of Arkham, every night Batman returns to his “Batman man cave” and deals with the insanity he literally and figuratively endures. His crusade takes a toll on him and on some days, it takes off a larger piece.

Batman’s hardships with the villains he faces comes to a head when some of his greatest rogues faces him. While the action sequences are phenomenal courtesy of Jones and Madsen, the dialogue between Batman and the Asylum doctor is significant; the talk amplifies whether or not Batman’s role as hero of Gotham really is for the greater good or if his crusade leads to actual rehabilitation.

Whether or not this is the case is critical to who Batman represents since time and time again he believes everyone, even The Joker, can be saved from their evil lifestyles. As the issue rounds out, Batman will discover not only his personal fears but if his entire vigilante lifestyle is for the greater good.

The Visual Horrors of Insanity

One of the first comic book covers I ever saw was a Kelley Jones cover to the early 1990s ‘Batman: Knightfall’ series. As a horror genre fanatic, seeing Jones’ elongated cowls, exaggerated capes and distorted movements surrounded by gothic architecture and morbid shadows made me love not just Kelley Jones’ art, but the comic book medium in general.

Jones brings this same intensity to “Kings of Fear” in every panel. You can feel the crushing blows of each punch and kick, whether it’s on a low level crooks in a warehouse or a nice uppercut to Two-Face in the Asylum. What is most enjoyable about Jones and Madsen’s work is how extra every facet of the story is presented. Joker’s ghoulish grin is a little bit more wide sinister when speaking to Bats. The soft glow of a lit match illuminates a huddled rogues gallery against the shadow of the Bat defines their fearful faces more than usual. The sickening green hue enveloping the Batman as he is sucked into the nightmarish world of the Scarecrow is a bit more terrifying.

Because this is a Scarecrow-centric story, you really couldn’t ask for a better artist team than Jones, Madsen and Leigh yo draw this terrifying mini series.

I have been excited about this Peterson and Jones series since it was announced and so far the story has exceeded expectations. Very much a fan of Scarecrow / Batman tales that focus on Bruce’s psyche, so I cannot wait for Part Two to see how far we go into the depths of the Dark Knight.