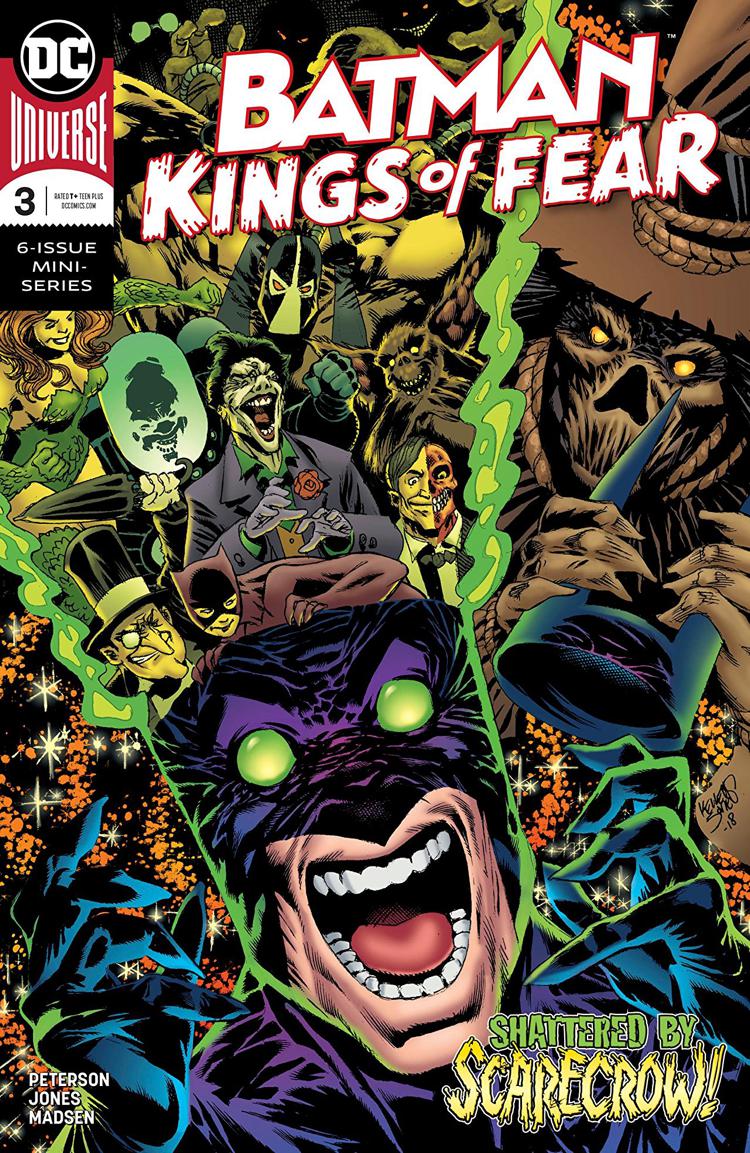 A Night In The Life

Scott Peterson and Kelley Jones’ “Evaluation” is both humorous and frightening when it comes to the current state of the Batman and what his crusade for Justice actually entails. While this continues to be a tale of Scarecrow trying to crack the ultimate fear code of the Dark Knight’s, Part Three of this series leaves the reader to figure out not what frightens Batman, but what drives him to protect Gotham.

The Non-Glamorous Moments of A Hero

Scarecrow makes a deal with the Dark Avenger he will provide information about his hostage if he is able to give Batman the ultimate psyche evaluation. Personally, I’ve never seen Crane’s Scarecrow as funny as Peterson pens him to be in this issue alone. Even if it isn’t meant to make me laugh, Scarecrow’s surprised demeanor brings up an important point about why Batman IS Batman. Bruce isn’t just going out night after night fighting the major players in his classic rogues gallery like Joker or Two-Face. Some nights Bats just patrols star lit rooftops to assure that families get back to their house safely as they cross dim lit alleyways, something that is very familiar to this vigilante. Some nights being the Batman is as simple as making sure the city is calm, even if a colorful villain isn’t causing chaos. Peterson gave an eye opening look into Batman, both his crusade and his current problematic psyche, which always makes for a solid story when involving the God of Fear.

Once again, Kelley Jones and Michelle Madsen presents the terrifying corners and alleys of Gotham City and its protector. With Jones’ Batman, it’s not just the elongated ears and the exaggerated movement of the cowl that makes him fit wonderfully into the horror genre, but he is l i t e r a l l y a towering character; from common attributes to his tall stature to the extreme muscles in his arms and legs. These factors are all important when you want to present this vigilante as a scary threat to criminals, minor or major. But one of the best parts of this issues comes in an exchange between Batman and a young girl who is afraid of how huge he is from his tall ears to his height. It turns into a heartwarming moment when the Caped Crusader tries to make her feel safe, which in the biggest sense of Batman’s mythos is his purpose. Between sweet moments like this, a look at the Batmobile and the tired and worried expressions seen bursting through the Dark Knight’s cowl, this artist team continually hits it out of the park when it comes to bringing the shadow of the Bat to life.

Is This The Real Life? Is This Just Fantasy?

I feel for Bruce in this issue for the simple fact that he is entangled in Scarecrow’s fear games and, for someone so obsessive about control, not knowing what is real or a hallucination must be exhausting. This of course makes me anxious to see what exactly Scarecrow will find within the mind of the Dark Avenger in Part Four.