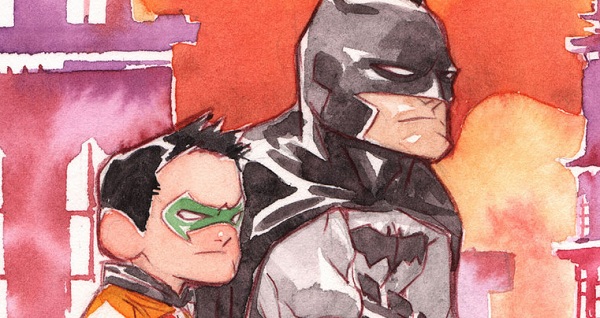 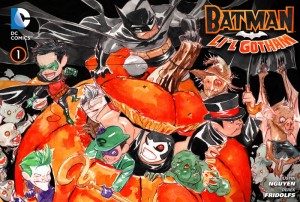 As a 99 cent digital-first comic, Batman: Li’l Gotham probably doesn’t have quite as high a bar to jump in order to earn my recommendation as a $2.99 (or $3.99, or even $4.99!) comic would. In all honesty, I’m a bit annoyed that DC’s digital outlet doesn’t actually let me download and archive a copy of my purchases. I know that it’s a measure to fight digital piracy — and I’m strongly against digital piracy, by the way — but it’s irksome to find myself at the mercy of DC’s management of my online account, and any reminder that I don’t actually own digital purchases (I am, in fact, only licensing the ability to view the content) makes me less eager to spend anything on digital content at all.

But all that aside, should you go spend a dollar on Batman: Li’l Gotham? Yes. Yes, you should. Dustin Nguyen’s gorgeous and clever watercolors are worth the price alone, and the Halloween-themed story is nearly as funny and inventive as the art. As the title would indicate, Li’l Gotham is a lighter take on the Dark Knight, but Bruce and Damian still feel like Bruce and Damian, and there’s even a bit of heart in the way Fridolfs and Nguyen tell a Paul Dini worthy story about a costumed ten-year-old who still feels out of place on the holiday most specifically intended for costumed ten-year-olds.

While Li’l Gotham has gotten a fair amount of fan attention for a promotional image that seems to include pre-New-52 versions of most of the Bat family, including a number of fan-favorite characters who have yet to appear at all in DC’s new continuity, be warned that the first issue focuses almost entirely on Batman and Robin. While artwork of costumed children allows dozens of characters to make unofficial cameos, there are no actual Stephanie Brown or Cassandra Cain appearances. (Well, probably not. The line between costume costumes and real costumes isn’t always perfectly clear. And isn’t that half the fun of Halloween?)

So don’t buy Li’l Gotham because you want to prove Dan Didio wrong. Buy it because DC should be encouraged to publish Dustin Nguyen’s watercolors wherever and whenever they can. Because Batman should have a lighter side. And because, in the end, it’s okay to have a little fun. As a good example for Damian.