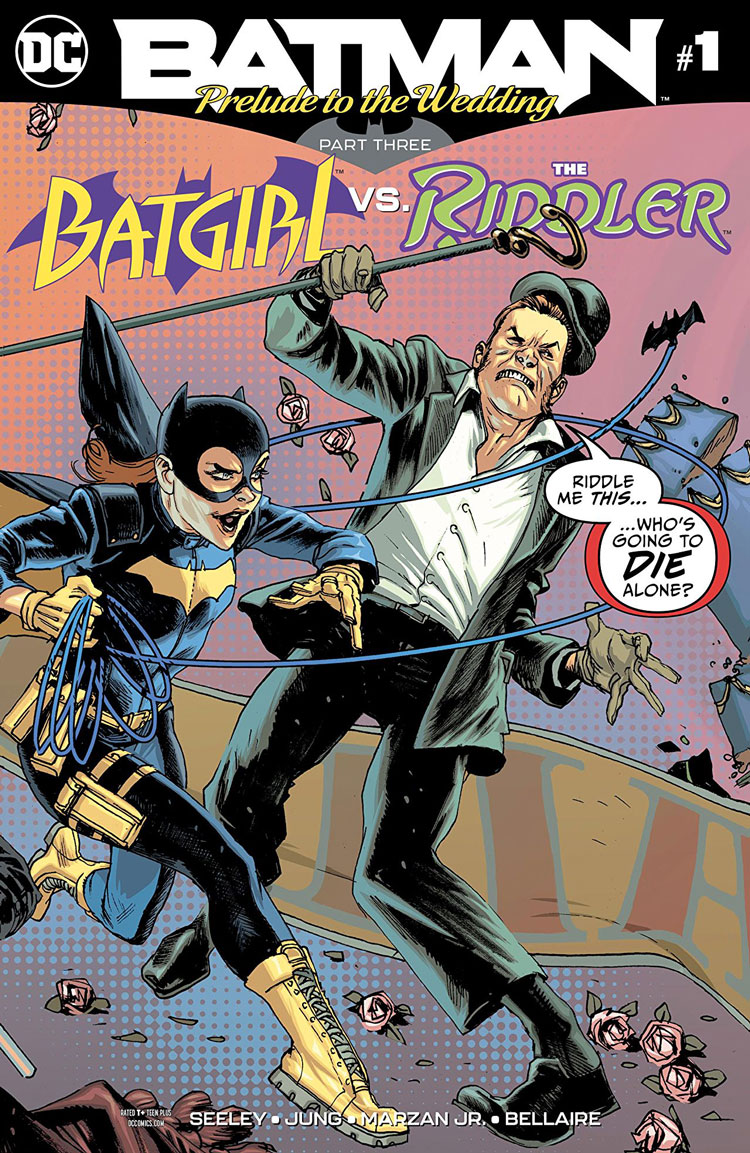 What Is The Answer To The Question Of You?

Wedding season always makes everyone swept in catch the love bug and the DC Universe is no exception. In Tim Seeley’s next chapter in Batman’s wedding prelude, the protector of Burnside faces off with the King of Conundrums in this interesting look into both hero and villain’s look inside their personal and professional lives in light of the union between the Bat and the Cat.

There’s Someone For Everyone.

After his near death experience with the Clown Prince of Crime, The Riddler has an odd epiphany that leads him into kidnapping four innocent people of Burnside and it is up to Batgirl to solve his riddles and save them before it’s too late. While the set up of this story is a solid foundation for any Riddler tale, Tim Seely goes beyond Edward Nygma’s egotistical self and shares the rogue’s longing for true affection.

As Babs grapples different places to rescue Nygma’s hostages, Seely provides an in depth dialogue at Riddler that goes past the riddles; since Batman found Catwoman to love his obsessive self, is there someone out there suitable to his obsessions?

Also touched upon is Babs’ love life and how she feels about Nightwing (Dick Grayson), whose relationship has been an emotional roller coaster of sorts since the 1970s. The best thing about these character is being able to see them as three dimensional and having them, no matter if hero or villain, relatable on some level.

Between a personal reflection on their love life, the action packed panels and another great tour of Burnside, Seeley pens a fun chapter in this prelude that anticipates the DC wedding of the year.

Minkyu Jung’s art fantastically matches with Tim Seeley’s story, capturing both the action and the heartache both leading characters face. From highlighting the color of Barbara’s green eyes in Riddler’s green suit to the color of the onomatopoeia’s lining the side of every kick and punch Batgirl makes reflecting the gold in her boots, Jung’s pencils and Marzan’s colors connect well with the dialogue.

Although there are many questions asked in Riddler’s race to (try and) prove he is the most brilliant man, the answer to if this third chapter leads the reader wanting next week’s part four it is definitely a ‘yes’.

Even though it is Batman and Catwoman tying the knot in a few weeks, Seely’s prelude makes you want to know (even more than you already did) about how the rest of the Batman mythology is reacting to the big news. This series continues to be a great companion read to King’s Batman storyline and I definitely recommend picking it up from Chapter One so you can be in the loop about how each of these classic characters play a role in the exchanging of vowels.