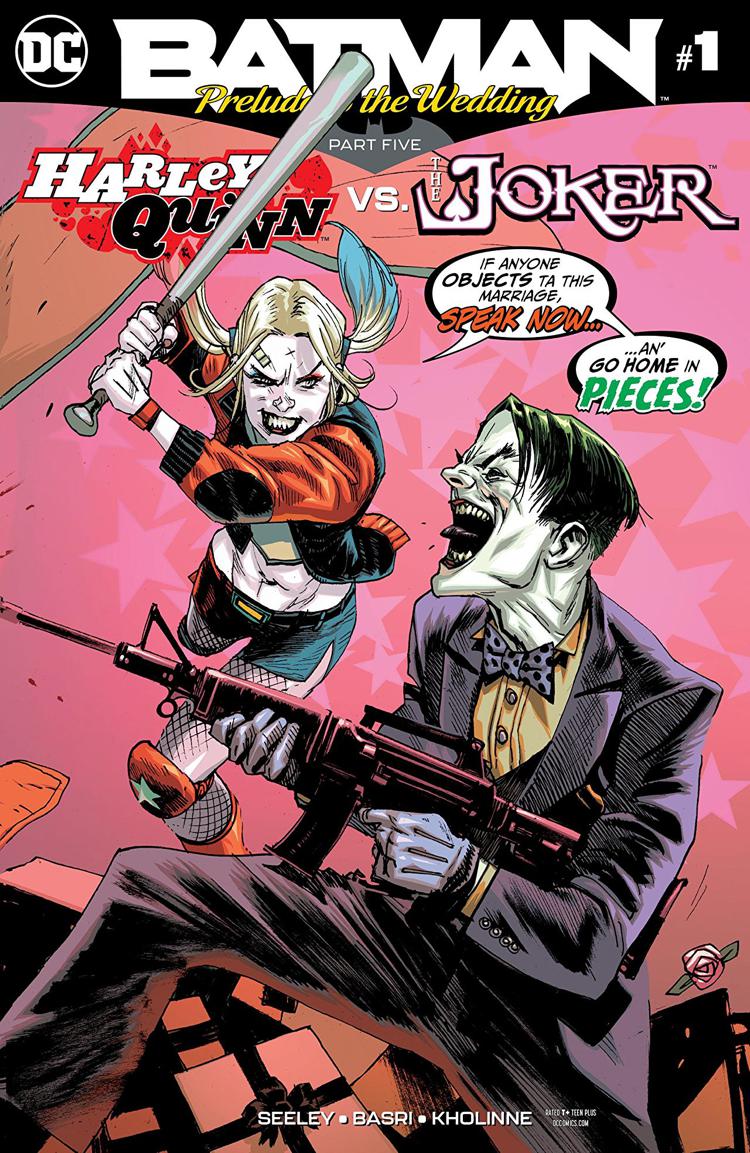 Fitting that the last chapter of Tim Seeley’s mini series leading up to Batman and Catwoman’s wedding would have Harley Quinn and The Joker going head to head. Their relationship has been turbulent since the early days on tv’s Batman: The Animated Series. Despite Harley’s fascinating evolution in comics, television and film as her own character separate from being defined as “Joker’s girlfriend”, there’s always a piece of Harley’s heart that has a soft spot for the Clown Prince of Crime, for better or for worse. Between Seeley’s analysis of Quinn and Joker to the playful illustrations by Sami Basri, this conclusion has all the crazy you would expect from the pairing and more.

In Sickness and In More Sickness

Harley Quinn is finally fed up with her puddin’ and decides to have him be the guinea pig for her most dangerous death traps. However, the Harlequin of Hate continues to test Harley’s will power, seeing how long and how hard he has to bat his eyes to stay alive. Although Harley Quinn has her own life, gang of Harley’s and ‘rogues’ gallery, writers call back to her BTAS and “Mad Love” days where she was hopelessly in love with The Joker, transforming from Arkham Asylum psychiatrist Dr. Harleen Quinzel to his new and improved Harley Quinn.

Despite their obvious abusive relationship, fans continue to root for these two to make it work for the simple fact that Harley and Joker constantly say they understand one another more than anyone else. While Joker may claim he gets Batman more than anyone, he knows Harley’s strengths (to his dismay) and weaknesses. One weakness that I’m sure both Joker and Harley know is that Quinn has always longed for a ‘Happily Ever After’ with her puddin’ and Seeley used this element to craft this concluding arc; whether or not she can make it work with Joker, seeing the Bat and the Cat find happiness is enough for Harley to want to have these two make it down the aisle. This and the history the two villains have shared for the last 25 years bring a comical and somewhat endearing story involving the DCU’s two favorite jesters.

As I’ve said in my other reviews of Seeley’s Prelude to the Wedding series, I love the rotation of artists in each of these chapters. One of my favorites that matches so well with the chaos of the tale is definitely Sami Basri and the artist team. Perhaps it was Jessica Kholinne’ soft color pallet used throughout the book, ranging from the tint of Harley’s pink and blue pigtails to the rose hues in her Sleeping Beauty-esque gown. Or perhaps it was Sami Basri’s pencils drawing Joker’s hallow eyes as he stares down his possible death wish or the wrinkle and lines in Harley’s nose and smile. Whatever stands out the most to you when you pick up this book (PLEASE pick up this book), regardless this comic has a spectacular balance of strong writing with three dimensional characters and beautiful artwork.

Till Death Do They Part

Well gang, next week is the BIG day and I’m just as nervous now as I was when I started with Chapter One of Tim Seeley’s prelude. If you’ve been keeping up with this mini arc and are caught up with the “Batman” books, all you can hope for is there will only be fireworks when you’re celebrating the 4th of July holiday and not because, well, people are dying (somehow?) by a very jealous Joker at the wedding. My biggest takeaway from this arc is that Batman and Catwoman’s wedding has effected practically everyone in the DC Universe and it’s fun to see how each person (hero or villain) is getting ready for the event of the season.