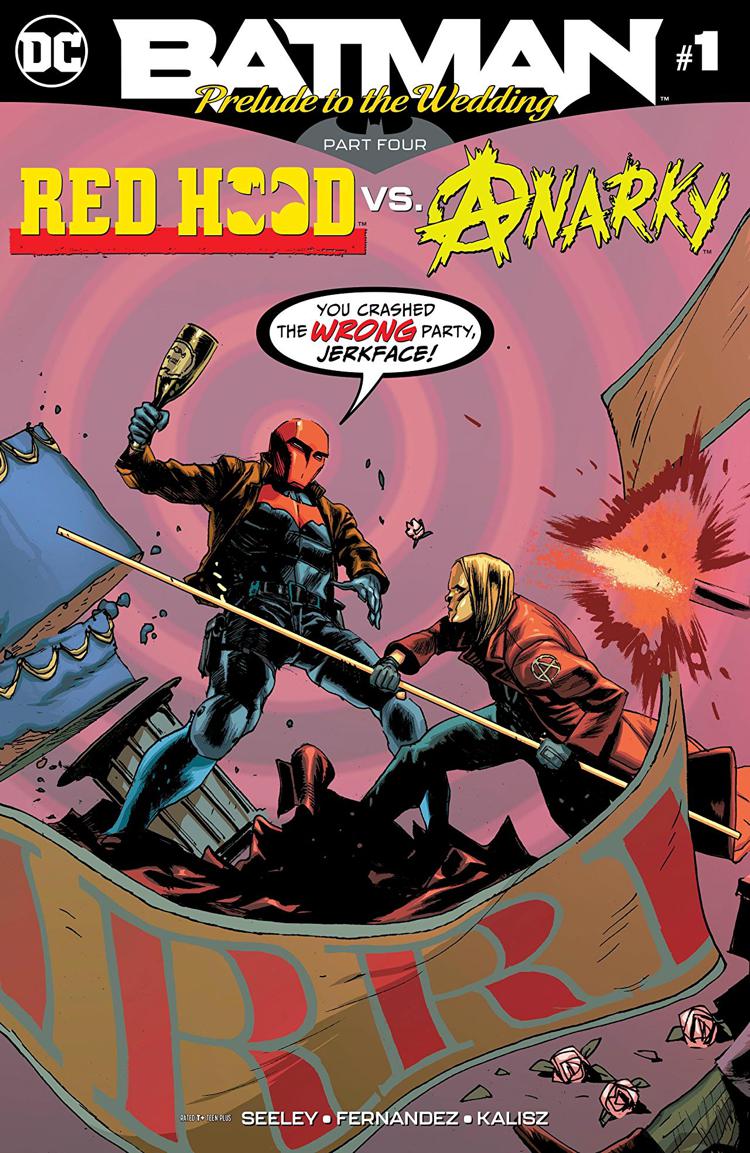 The Eyes of Goodness in Gotham

Part Four of this prelude series before Batman and Catwoman’s big day places the concept of chaos on its head courtesy of writer Tim Seeley and artist Javier Fernandez. Since this mini arc is a bird’s eye view into what the Batman universe is like leading up to the wedding day, Seeley’s comic provides an interesting look into two complex and troubled characters within the DC Universe and, coupled with amazing illustrations, places a microscope on both their ideas of doing ‘good’ for their loved ones and the citizens of Gotham.

It’s the night of Selina Kyle’s bachelorette party and Bruce has asked Jason Todd to keep an hidden eye out for any trouble. What Red Hood and his Outlaws come across is Anarky and those who want to channel their anger into setting Gotham City and its Gothamites on fire.

Jason Todd aka the second living Robin aka the first dead Robin aka resurrected and current Red Hood has always been a fascinating character to me within Batman’s history. Jason embodies a figure that has dealt with major trust issues on a huge scale over the decades let alone being raised from the dead by the Lazarus Pit. Considering all Jason Todd has been through, it’s seldom to see him not on the defensive side when it comes to working alongside Bruce or any other members of the Batman Family. Seeley pens a Jason who doesn’t just do a solid for Bruce by watching out for Selina but also protects his streets of Gotham of which he is so territorial.

As Jason is there for his father figure, you see an almost heartbreaking look at Anarky’s yearning for a father since a young age, so much so that he even accepts possible affection from the Clown Prince of Crime himself, The Joker. While Anarky sees this as a potential family reunion, as usual Joker takes this young troubled man’s love of chaos and manipulates him to get what he really wants. Both another humorous anecdote of the night before the Bat and the Cat’s big day and an insightful look into these classic characters, Seeley’s writing continues to provide a fun Batman tie-in story.

The Color Pallet of Chaos

One of the highlights of Tim Seeley’s mini series is the rotating interior artists on each chapter. From the shadows in the alley of The Butcher’s Block to the bright electricity changing through the battle between Anarky and Red Hood, Petrus and John Kalisz’ illustrations does not disappoint in Part Four of this prelude. I especially enjoy the ‘quieter’ conversation panels in the story, such as Jason being touched that Bruce asked for his help to watch out for Selina or Jason’s sit down with Anarky as he tells his desire for a father figure in his life; you can see the emotion within the facial expressions and body language that makes the words have even greater impact.

Headin’ To The Chapel

Although I’m so excited in the next few weeks the big wedding is finally happening in Batman #50, I’ve been thoroughly enjoying Seeley’s Prelude series and I cannot WAIT to see the mad love between Harley Quinn and The Joker in Part Five. The suspense of knowing whether or not Bruce will finally be happy is terrible…I hope it will last.