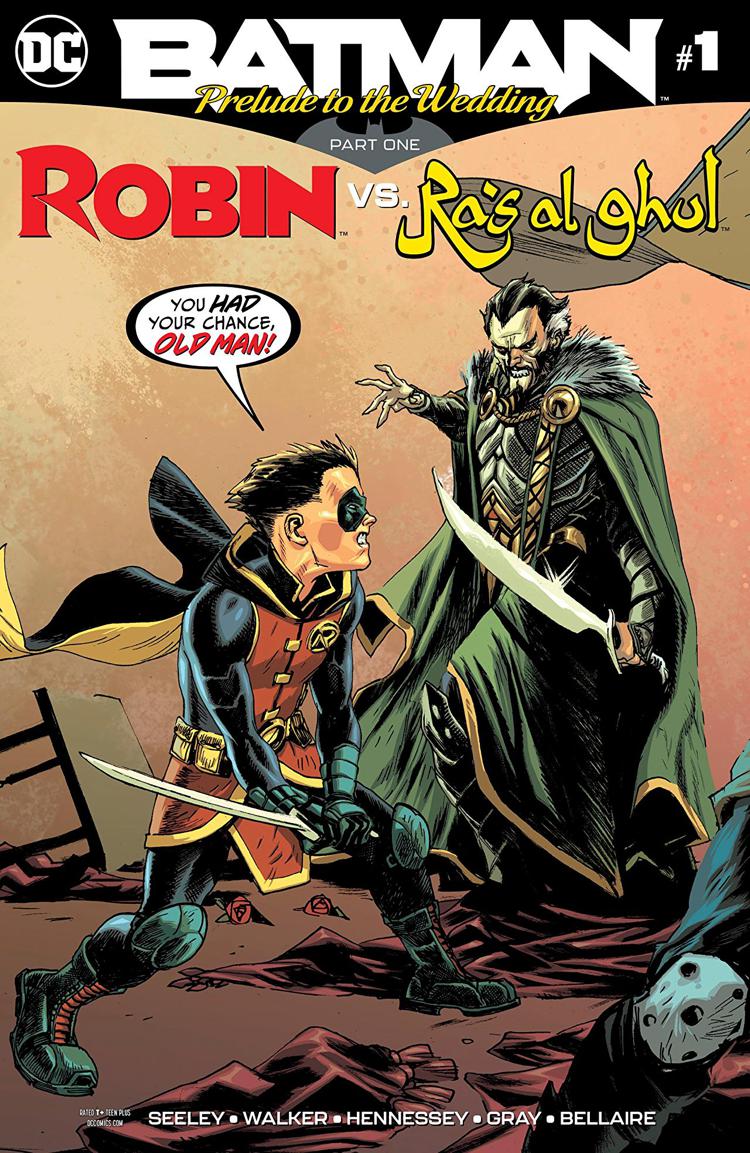 The Stresses of Planning A Wedding

While the event of the summer is the revamp of the Justice League, the social gathering of the year has to be the wedding of Bruce Wayne and Selina Kyle. Of course, Batman and Catwoman finally tying the knot can’t be a simple affair and the two have worries that go beyond who sits at what table during the reception. Tim Seeley and Brad Walker’s prelude arc to the wedding of the year is just as action packed as it is emotional, making the reader anticipating this defining moment of the Dark Knight’s happiness even greater.

As Bruce and Selina’s wedding looms closer and closer, Damian has specific concerns about Selina marrying his father. These insecurities come to life in a way that’s unexpected to even Damian, resulting in an eye opening confrontation with his grandfather, the ecoterrorist Ra’s Al Ghul.

Writer Tim Seeley isn’t a stranger to the Batman Family, in particular Dick Grayson’s Nightwing who made random but fun visual cameos throughout this issue. One of the qualities I enjoy about Seeley’s portrayal of these characters is the emotion behind the domino mask. Selina tries to bond with Damian as he gets fitted for the big day and, technically becoming her step-son, has legit questions dealing with that topic (such as, do I have to call you ‘mom’, which is a fun conversation for anyone in this situation). On top of all that, Damian has a ‘trippy’ talk with Ra’s Al Ghul, who not only shades Selina like a palm tree but also his own grandson, believing he doesn’t have what it takes anymore to eventually walk in his lethal footsteps.

Seeley interestingly takes what thoughts and worries Damian is suppressing about his father marrying Selina and distributes it in several ways (a potential step son, the Boy Wonder and a grandson) ultimately making it both a solid action story but also a deep look into the boy beyond the mantle.

An Out Of Body Experience

From the bustling streets of a Gotham City tailor to a colorful video game arcade to the hallucinogenic corners of an assassins mind, artist Brad Walker navigates through this weaving Damian centric comic with ease, pairing with Seeley’s story fantastically. Facial expressions are always an important aspect to telling a tale that has an emotional foundation such as this and Walker, Hennessy and Gray matched each figure’s aesthetically energy; worry, anger, calmness, excitement and humor swirl through each panel, elevating Seeley’s prelude to new heights.

To be honest, this prelude is a MUST read for any Belina (Bruce and Selina) fans out there who are just as hype about the wedding as I have been for who knows how long at this point. While the 4th of July and the release of Batman #50 still seems far away, this series combined with the regular publication adds both excitement and nervousness about the big day for the Bat and the Cat. From the normal beginning to the outrageous (but not THAT surprising) “to be continued” last page, Batman’s prelude to the wedding is a rollercoaster everyone is tall enough to ride.