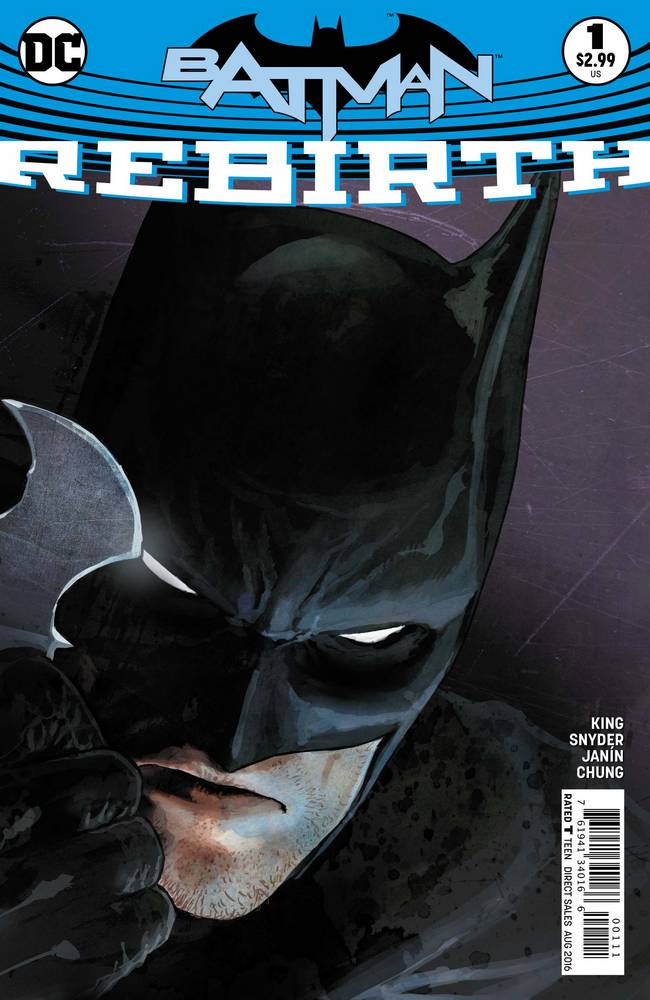 Rebirth is in full swing, and now it is time for shirtless Bruce Wayne to be ushered into a new era….the King/Janin era.

Scott Snyder and Greg Capullo unleashed one of the greatest Batman runs ever, in my humble opinion, and as it wound down I thought many times “I feel bad for the suckers who take this book on after this pair are done”. King, Janin and David Finch are the trio taking Batman on, and if this transition issue by King and Janin is any indication…these poor suckers are going to take us for a fun ride.

Scott Snyder and Tom King co-write this one, which gives the comic a feel of a true transition. Batman: Rebirth #1 is a primer for the upcoming regular series, putting the pieces in the right place on the chess board and setting the tone for what is to come. I really like what the ideas this issue gets readers ready for. King’s dialogue is snappy and, as was the case with Grayson, he works very well with Mikel Janin. There’s more humour in this comic than I expected, which absolutely delighted me, and if there was one overall feeling I got from the issue, it is that Batman is in good hands.

This issue features a lot of familiar Batman mainstays, but they are done so well they don’t feel boring. I have never read a conversation between Lucius and Bruce that plays out quite like this one, and that makes it dynamic and fun to read. It feels like some of the best parts of what made Grayson a good read are coming to Batman, and the new interpretation of Calendar Man takes a character with quite possibly the stupidest name ever and makes him a legit creepy threat. I actually had a reaction to this Calendar Man. Calendar Man. I’m still floored they made this work, and it is a testament to how well this issue is written and penciled.

Speaking of penciling, Mikel Janin is a damn beast. I feel like I’ve said that before, because I’m not sure he’s penciled a bad page since he started at DC with Justice League Dark. His art is insanely detailed, with excellent facial work. He handles humour well, the creepiness of Calendar Man perfectly, and damn…Gotham just looks good by Janin’s hand. He’s an A-list artist deserving of a book that is this high profile, and he does not disappoint. June Chung’s colour work is on point, capturing and enhancing the best aspects of Janin’s artwork and making it more vivid and robust. She colours this issue damn well, and I hope she’ll be working with Janin going forward. Batman will be in good hands when Janin & Chung are at the artistic helm, and you won’t find many (if any) comics that look as good as this one this week.

Batman: Rebirth #1 is a fun read that sets the deck for the upcoming launch of the new volume. The issue acts as a transition between two volumes of the iconic series, which is often an awkward story to tell, but that isn’t the case here. If this issue is any indication, Batman is going to continue to be a damn good read and King and Janin are going to take readers on a fun ride. Bring it on.