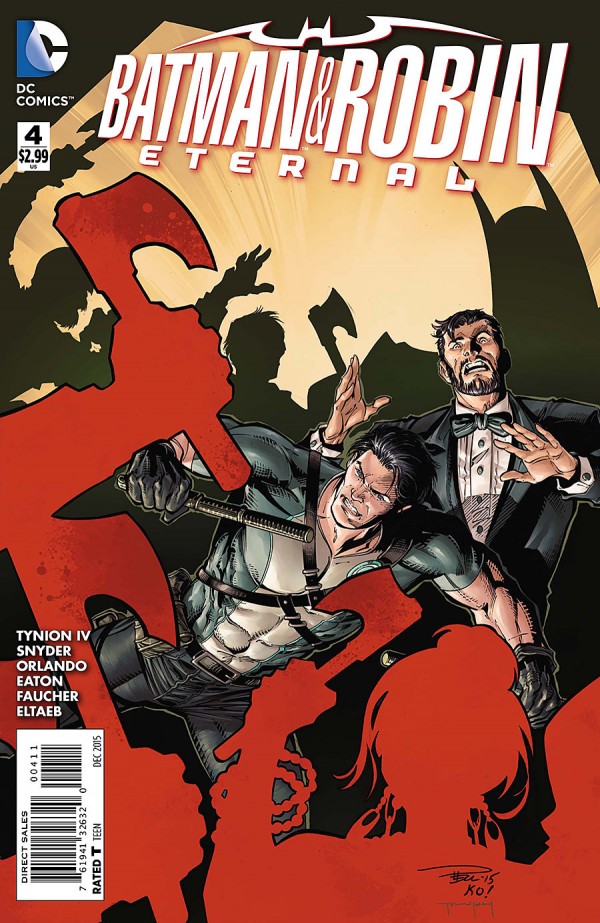 Mother’s agents, for lack of a better term, continue their assault on the Bat-family as something sinister comes to light in Batman & Robin Eternal #4.

4 weeks into this series I am still enjoying the pace of the script and the characters in play. All aspects of the Bat-family are in play in a big way, and the emergence of a new group in this issue brings an interesting dynamic. There are some solid moments in this issue with Bruce as he continues to be thrown into confusing situations for a man who thought he was just a business tycoon who financed Batman, but the stars are really the “kids”. The Robins of the past, present and future are a dynamic bunch with big personalities and Orlando captures their voices well. The more Robins and “extended family” members they can cram into these issues the more I seem to be enjoying this story, so I’m game for more of this writing team going wild with this huge cast of characters.

This issue had some faltering on the art front compared to the first three, with a noticeable decline in the artwork at points. Eaton’s work ranges from solid to awkward at points, with few images that really wowed me. For my tastes, his work is a decline from Daniel & Pelletier and I couldn’t help but feel like some of the larger story beats should have had more visual impact. There’s very little style in this artwork, as it feels like stock superhero artwork that lacks much in the way of flair. Gabe Eltaeb’s colour work is solid and brings a consistency to the artwork. Overall, the visuals of this issue aren’t terrible but they aren’t great either, which was disappointing.

Batman & Robin Eternal still has my attention after this fourth issue, though the “curse” of the weekly title and rotating artists is already starting to rear its head. This story is well written and the art gets the story told, but I’ll be hoping for some more dynamic visuals in issue #5.