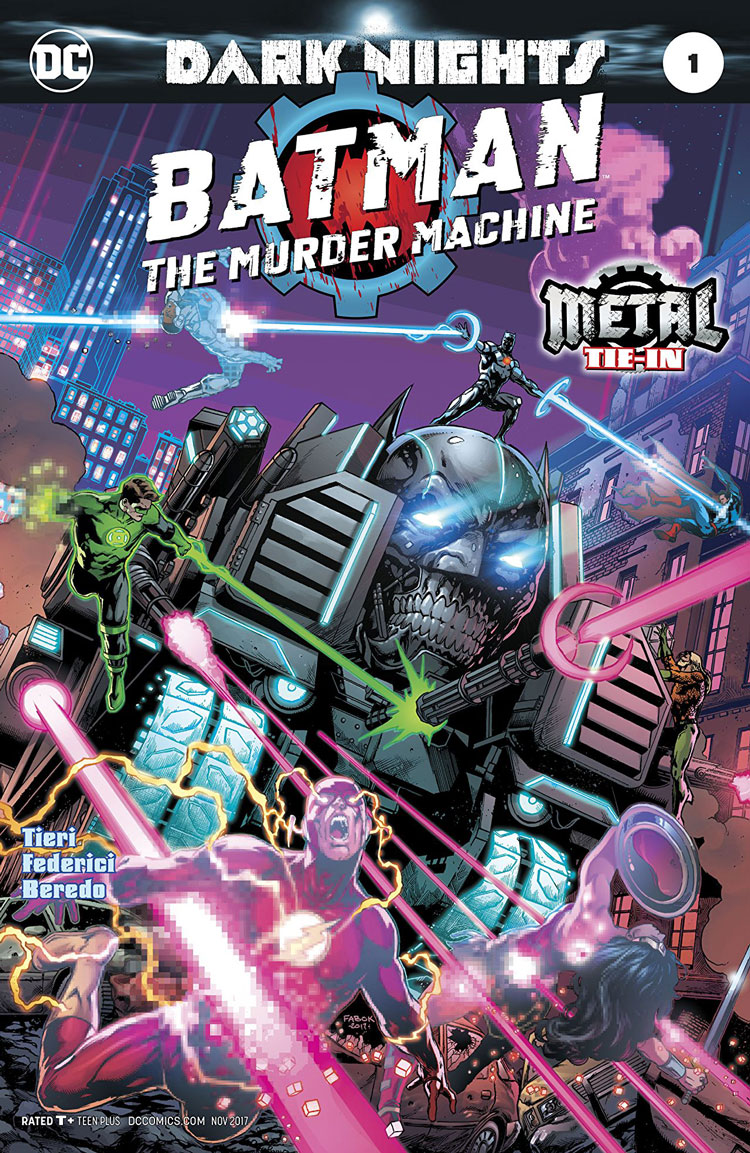 I’m in a safe place.

With the arrival of evil Batmen, the world is in disarray. Vic is trying to fix the issue from the Watchtower, only to be interrupted by the Batman of Earth -44 (that’s negative forty-four), who lost his last semblance of family and slowly moved to become a computerized force of vengeance. Vic is immediately put into a struggle against a calculating foe and former friend of another world, his thoughts on the world and his own father.

Even though only a couple of rolled out, the Metal one-shots so far are excellent. Batman: The Murder Machine is yet another spin on a Bruce Wayne that decided eschewing his sense of morality was rather okay. The set-up for the story is heart and back breaking, but ultimately a reflection of Bruce’s psychology.

Very often, we find out what matters to him once he loses it, but not quite in a “don’t know what you got til it’s gone” manner. His deepest emotions tend to rise when he faces grief, and the manifestation we see in The Murder Machine is one through attachment to the vestiges of familial bonds. Bruce decides that a digital Alfred is better than none and finds a way for them to be connected indefinitely, even if that means they are both driven to dismantle the world.

Frank Tieri and James Tynion IV have written this story in a manner which gives a realistic spin on why this Bruce has become a technological tyrant. The loss of Alfred, his father, and the subsequent near-dismissal from his friends put him at odds with a world that he already has issues connecting with.

What I find interesting is that Tieri and Tynion write a resourceful Bruce who takes advantage of an opportunity to hold onto his family. The progression from superhero to supervillain almost overnight is seamless, and you can plot each step as it develops to the present setting of the story.

Vic seems to be left aside much of the time, so I appreciate how Tieri and Tynion mix his love for his father, his stature as a hero, and some elements from popular culture. All of his dialog captures his compassion, regardless of which world he hails from.

These elements point to the vast similarities between worlds, including how there are truly some constants. Vic, as one of those constants, is dedicated to helping people, and the fact that he was the one to prop Bruce up during a significant moment of need is a testament to him as a character and Tieri and Tynion’s ability to create fully realized people.

Riccardo Federici’s art drawns upon the humanity of every single character. As such, there are many painful moments in The Murder Machine. Silas’ distress, Cyborg’s desperation, and the alternative beats of Bruce’s sadness and twisted malice are nearly palpable at Federici’s hand. The level of detail is astounding and at every point of focus characters seem as though they are living people.

Federici is an artist who has a firm grasp on the nuances of emotions and communication, and this is evident from the first page with Silas’ worry for his son. Such skill is important for humanizing Bruce, which feels like a wise choice because visually leaning too heavily into the absurdity of an evil Batman may not have had the same resonance or meaning for the comic.

For an environment so full physically, Rain Beredo makes this comic feel desolate and empty. Flashbacks are haunting, letting only a small amount of color through. Alfred dying and Bruce’s conversation with Vic on Earth -44 are particularly deep, pulling readers into a dreary, bleak world underlining the developments within the plot.

In these pages, Beredo expertly uses a nearly grayscale color scheme that matches the emotional tone of the events that transpire. Every other page is more fully rendered with soft but clearly distinct colors. Beredo stays in touch with the feelings that drive this specific Bruce to become the murder machine. When brilliance is present, it is not to showcase optimism, but the clash between heroes, an excellent use of brightness to contrast what is happening in the story.

Batman: The Murder Machine is a relatively “fun” exploration of one of the many ways Bruce could change, as well as a great portrayal of Vic as a character. In this cascade of tie-ins, while we simultaneously deal with the consequences of Metal, there is a lot to unpack, but that does not mean there is anything missing from this story. This story is connected, but stands on its own as a piece of affective storytelling, crafted by a team of creators that can unravel intense and deeply emotional themes.