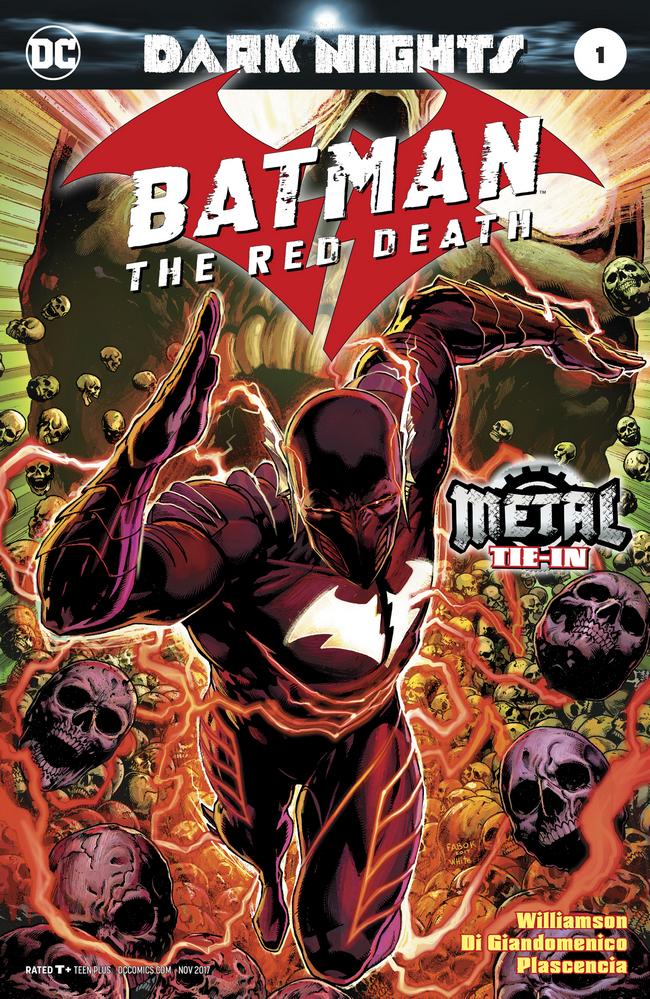 Loss has given way to a Batman willing to go to any lengths to save the world, but can he truly save a dying world in a multiverse that should never exist? Find out in Batman: the Red Death #1!

Williamson does a fabulous job creating a backstory to one of the many Dark Knights sent to conquer the Multiverse. While the twisting of this particular Batman seems a bit out of step with the general characterization of Batman, it is a Batman of a different multiverse stuck in a dying timeline and on a dying planet, so I suppose the leaps in logic towards very un-Batman-like conclusions is understandable.

What I do like the most about his work are the speeches. The beginning speech about the dark multiverse and “witness[ing] the rise of a Dark Knight” is pretty awesome as well as the very joker-esque “bad day” speech at the very end of the comic. They just encapsulate both the tone that he wants to portray for these unfairly destroyed worlds as well as the twisted need to cause both harm and conquer worlds that aren’t impacted by such struggles. It’s nice and it gives clues to what kind of Batman may be the mastermind behind the Dark Knight League that has been born.

The art is captivating. Di Giandomenico allows darker and trippier scenes than you’d expect. A world devolving into a land with no gravity, people flying into the air to their dooms. Two men entering the speed force together, panels showing slowly how they disintegrate into the brightness of the light. A strange, The Fly-like amalgamation of two once great heroes, deformed and mashed into a creature of nightmares. I love what Di Giandomenico does here.

If you’ve been reading the Metal event so far, I’d definitely check out this tie-in. It probably wouldn’t make much sense if you haven’t read what’s been going on in the main story line as of Metal #1 or #2, but I’d say that if you’ve been liking the event, you’d like this brief backstory into one of the many batmen in Metal.