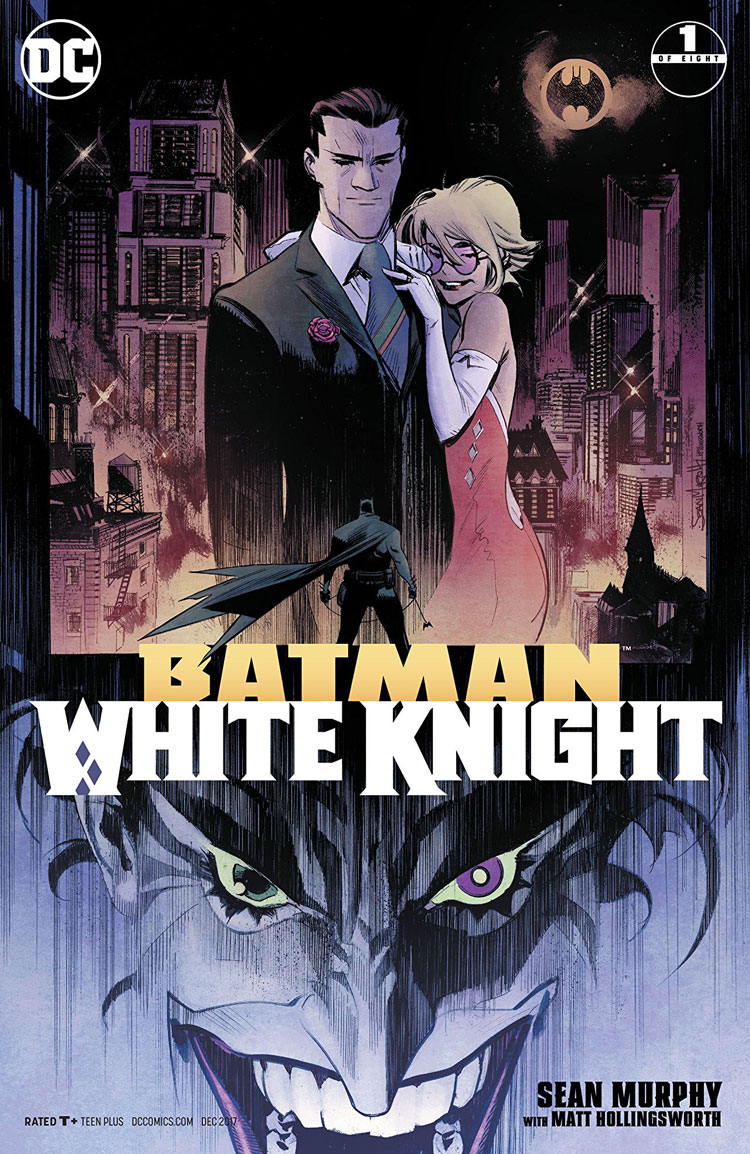 Batman: White Knight is a weird book in that it tries to work a convoluted premise that is built on ‘logic’ by calling attention to the more bizarre, convoluted aspects of the Bat-mythos. The core premise, on the surface, rips on one of the more famous(ish) Joker stories, 2008’s Batman: Going Sane, and expands it. White Knight focuses on Joker going sane and then, against all the odds, achieving power in Gotham to fight Batman through legal means.

If you’re already mouthing the words ‘what?’ or rolling your eyes, the actual methods the plot uses to make things move from A to B are genuinely off-kilter. The core problem that Murphy puts forth is, really, that the Batman of this book is rather reprehensible on all counts. The opening pages are riddled with moments where readers might start to wonder why the idea of this book exists.

The book establishes a common premise: Batman chases Joker, Joker antagonizes Batman, the pair’s dynamic as being mutually destructive is put forth. Then the Murphy puts out his thesis: Joker isn’t the villain, Batman is, and Joker plans on making the city see it. Fortunately, through acts of violence normally never within Batman’s wheelhouse, Joker gets his wish that a story like this needs: Batman, indeed, does something violent, cruel, and out of character … and everybody sees it.

Even until this point, okay, I don’t find the premise of “Batman is the real villain” a workable one (it has been debunked time and time again, why should this be different?) … but I am still in for the story. Where can it go?

Unfortunately, it goes south by the end. Murphy establishes that Joker’s criminality and his genius are separate things, that one can be removed while keeping the other. Seemingly armed with super intelligence, Joker establishes he has a plan to make big changes to the city, to the GCPD and Batman’s relationship with all of the above.

Perhaps the strangest aspect is how the comic actually demands we acknowledge some of the things Batman has done which violates the law in comparison with Joker. There is a logic behind this premise put forth by fictional reporters/commentators in the comic’s pages, but one line (the key to how this can all work, a legal-ish claim about what Joker’s criminal past) is so laughably strange that I almost laughed aloud reading it.

In this universe, sure, perhaps Joker’s criminal history is what it is, but Murphy asking anybody who even knows a little about the Joker to believe that 1) Joker was never charged with murder, ever, and 2) that the corrupt GCPD hasn’t just killed Joker by now is a tremendous amount to accept. There is also a bit about the bat-signal and the GCPD that makes me scratch my head and wonder if there was some aspect of the two’s relationship I somehow missed in comics all these years, but by that panel you’re either on board or you’re not.

There is clearly more to the story than the first issue can or will explore (for obvious reasons, what first issue lays down all of its cards right away), but once you conclude this issue? You’re either going to be all in because the premise is so weird you can’t NOT see where it goes, or you’ll be out before the comic even reaches the half-way point.

The art by Murphy and Hollingsworth pair well together in setting the tone and feel for this work. The pencils are frantic and the shapes of characters are often distorted to exaggerate their features. Joker/Napier has jagged, pointy features that are enhanced by his limber, skeletal frame. In contrast to this, Batman is presented as a hulking, wide-framed caricature of himself with a massive chin. Murphy’s presentation of Batman as more amoral, nebulous figure, albeit one who still has a tether to humanity thanks to Alfred … although that thread is fraying.

From the opening pages, White Knight plays with panels that are long and confining, sometimes broken out into smaller, confining spaces illuminated by red or black backgrounds. Outside of the splashes of red at the start, Hollingsworth plays with a very muted palette of greys, blacks, whites and blues.

The somber tone reflects the twisted, ash-grey world of Joker/Napier’s mind, and this palette will resonate with readers who enjoy the story or it will syphon the excitement from the narrative when read by somebody who finds the premise tough to chew and even harder to swallow.

This book is not going to be for everyone, and that’s okay. My hat is off to DC for allowing Murphy to present his “what if?” scenario at all. While Snyder is getting to present a cavalcade of dark Batmen, it seems fitting then that we get an alternate take on the Joker.

Myself, I wish that (as presented so far) Batman did not have to be reduced in stature or character the way he is, but that doesn’t mean future issues won’t rectify what for me was a shaky premise.