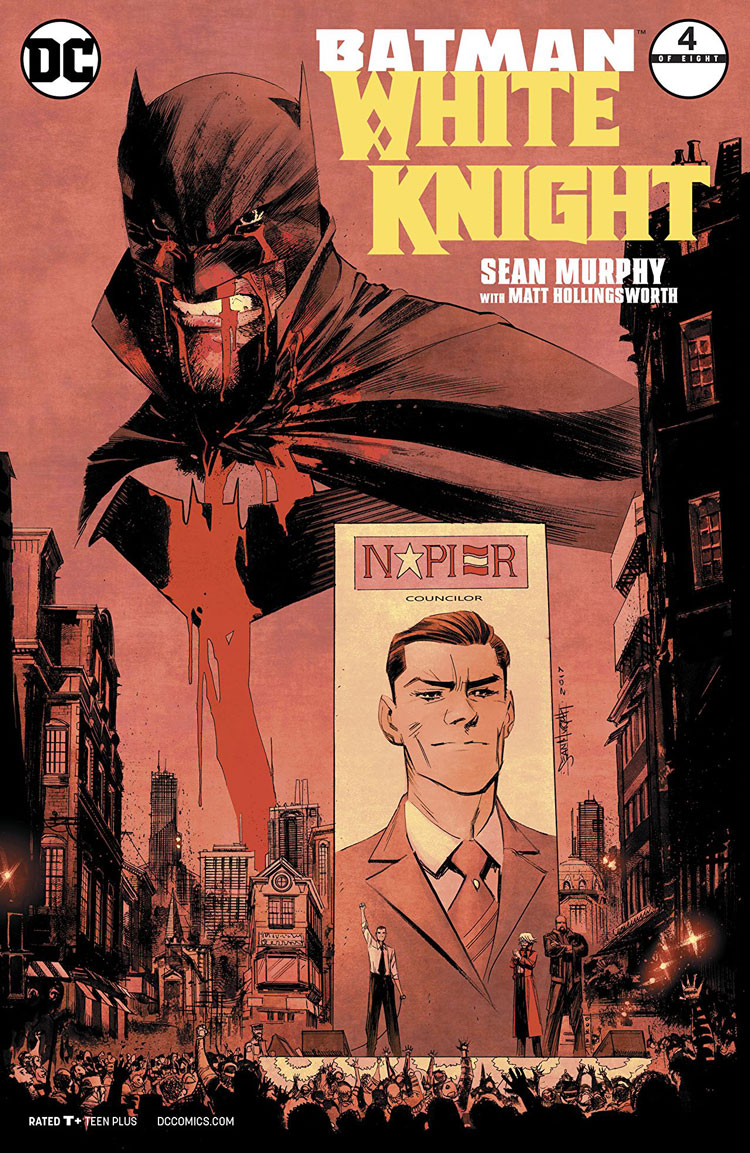 Sean Murphy’s Batman: White Knight gives us a Gotham City we thought we’d never see: a Gotham that has had enough of Batman’s shit.

In this astonishingly imaginative and contemplative series, Sean Murphy gives us a Joker, a.k.a. Jack Napier, who has been cured of all his psychiatric maladies and is preaching to Gotham and readers alike that “Batman is the true scourge of Gotham.” And after the first four issues of the series, Napier might be right.

This series began with an increasingly vicious Batman destroying public property, inadvertently injuring civilians, and being recorded beating pre-cure Joker into a coma. Since then, Joker/Napier has been released from Arkham, is currently running a media campaign to defame the caped crusader, and is actually usurping the Dark Knight’s mantle as Gotham’s savior by proclaiming himself as its “White Knight.”

Issue #4 brings this conflict to turning point. It’s difficult to talk about the specifics of the story without actually spoiling it so I’m just going to be frustratingly vague and express how excellent Murphy is as a writer. First, his dialogue is potent and kinetic. Every word and every sentence progresses the plot along and is completely in-line with how I expect each character to speak and interact.

Second, it’s the themes and commentary he imbues the story with. Napier’s plan hinges upon his PR campaign to turn Gotham against The Bat and he has decided to use a very specific political strategy that will be oh-so-reminiscent of a few real-life hot buttons in the world today. I applaud any writer brave enough to use that in their writing, but Murphy does so in such a way that not only makes sense for his story but actively gets you to think about the real-world implications of the aforementioned strategy.

Third and most importantly, he successfully creates doubt in the reader’s mind about Napier’s intentions. Half of this issue is focused on Napier and Harley’s relationship when they are behind closed doors and there has not even been a hint of an insidious intent in Napier’s machinations. Will this end with his descent back into madness? I have legitimate doubt. In that way, Sean Murphy has succeeded where many, many other cape-and-cowl writers have failed and has gifted us with a legitimately unpredictable superhero story. That is the most exceptional quality about this series.

Art wise? Again, we are dealing with Sean effing Murphy. What Murphy excels at in the book are his facials and how emotive they are. Take Batman, for example. The first thing you’ll note about Murphy’s depiction of him is how he hardly speaks. Despite all the emotional carnage around him, we have heard almost nothing from Bats.

But instead of verbal responses, Murphy instead depicts him with a smoldering and progressive anger throughout the book. It truly adds an intangible yet inescapably affecting tension to the story better than any dialogue ever could. Couple this with frantic and kinetic action sequences, wide-shots that are treasure troves of Batman lore and Easter eggs, and Matt Hollingsworth’s colors, and you have a masterclass of visual storytelling.

Batman: White Knight has truly been an incredible series thus far. It appears to be definitively answering the 80-year-old question of if Batman is truly Gotham’s savior or does his crusade only beget more turmoil. The only terrible thing about this series is it released issue-by-issue rather than right away in a complete collection.