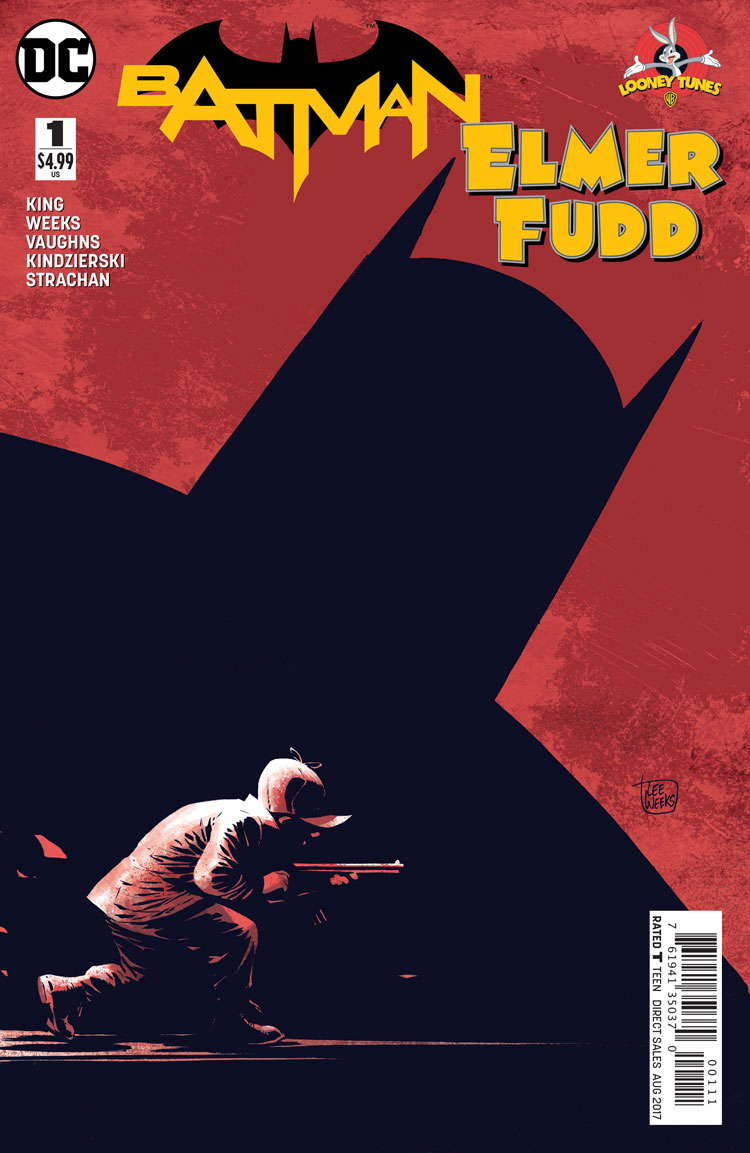 A hunter stalks his prey through the dark night of Gotham City.

Batman/Elmer Fudd follows Fudd, a hitman trying to get out of the game who finds himself drawn, inexorably, back in. He’s pulled into a scheme by Bugs “The Bunny,” who sets him on a collision course with Batman. Fudd and Wayne soon find that their lives intertwine in unexpected ways, and that they have more in common than they had believed.

Over the last week, I’ve mentioned to a few people that I’m reviewing a Batman/Elmer Fudd crossover. The reaction has been universal skepticism, along with a shaking of the head. “They’ll cross over anything these days!” is a common response, along with “How would that even work?” When I tell them it’s one of the best comics I’ve read in years, the response is utter disbelief.

There’s no universe in which Batman and Elmer Fudd should work together, and yet, miraculously, they do in ours. The creative team masterfully brings, not just Fudd, but the entire Looney Tunes gallery into the back alleys and dive bars of Gotham, rendering a rogue’s gallery of lowlife scum that are visually and verbally recognizable as the beloved anthropomorphic cartoon characters of our collective youth.

If Batman/Elmer Fudd just managed to convert Looney Tunes characters into gangsters and barflys, it wouldn’t rise above the level of amusing novelty. Instead, it transcends its stunt casting to deliver a satisfying, self-contained Batman story, and a perfect exemplar of hard-boiled detective fiction. The plotting is tight, the dialogue and narration spot-on and evocative, and there’s room for both a full story and multiple great action scenes.

The art, done by Lee Weeks, is breathtaking. This is one of the most beautiful books put out by any publisher this year. Weeks gives his characters grotesque, expressive faces that are the perfect hybrid of cartoonish and realism. Without a line of dialogue, we know everything we need to know about this comics’ Bugs from the first panel he appears in (and we know, without being told, that this is a human version of Bugs Bunny).

Every page of this comic has evocative, detailed scenery, well-staged, clear action, dynamic panel work, and the afforementioned expressive faces. The color work by Lovern Kindzierski, relying on muted blues and beiges, heightens the dreary mood. The art draws you into its world from the first splash page to the final “That’s all, folks!” and the result is compulsively readable.

And on top of all of that, there’s a second feature, also written by King, with art by Byron Vaughans and colors by Carrie Strachan. After thirty pages of Fudd in Batman’s world, we’re treated to eight pages of Batman in Fudd’s world. It’s brightly colored cartoonish fun in the Looney Tunes tradition and is a great bonus on top of the fantastic comic that came before.

Batman/Fudd is a wildly imaginative cross-over and one of the best hard-boiled detective stories in years. It comes strongly recommended.