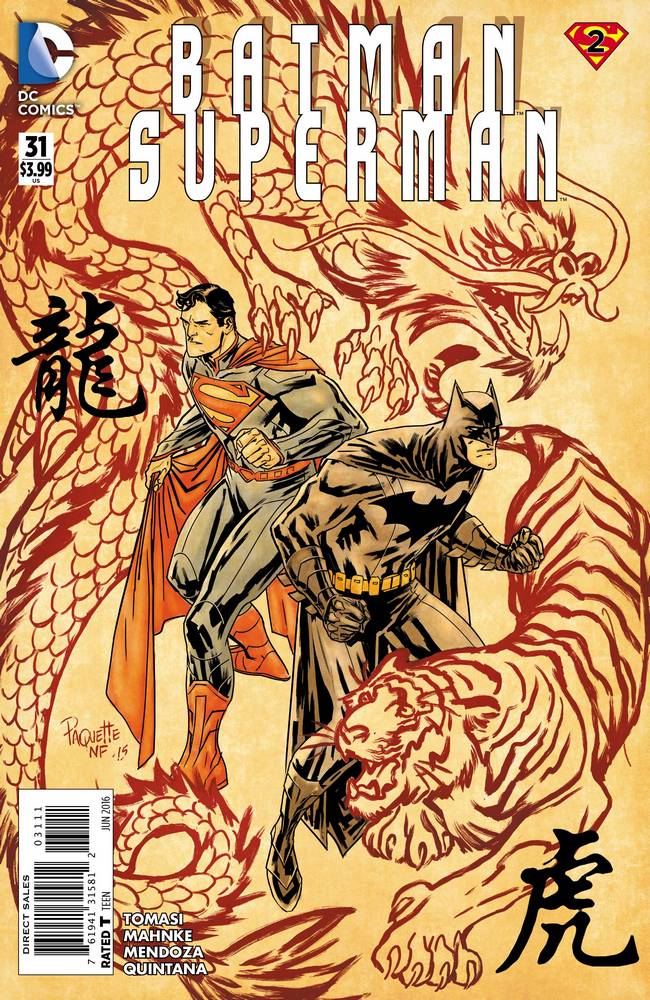 This is the second chapter of the “Super League” story. By the end of Batman/Superman #31 the crossover event is one-quarter complete and that League still has not congealed. And it doesn’t matter a bit. As DC recently revealed, the story has transformed. Yes, the Super League is still part of the story, but truly the focus is on “The Final Days of Superman”.

Tomasi hooked me with the first issue of this storyline, drawn by Mikel Janin in Superman #51. So I came back. In Batman/Superman #31 Tomasi and artist Doug Mahnke punch readers in the gut. It’s one thing for Superman to accept his fate. It’s another thing altogether when he decides to inform one of his most reliable allies. Batman, as readers may expect, deduces things are wrong, the two talk, and Tomasi showcases the relationship through dialog and lack thereof. For an example, check out the interaction between Batman, Superman, and Alfred in the peek that Comicosity Senior Editor included in his interview with Tomasi right here.

That’s the confluence of Tomasi’s story and Mahnke’s art. These two creators know when to amplify the other’s message and how. With just thirteen words and nine panels, the writer and artist tell us EVERYTHING you need to know about the relationship, the strengths and the weaknesses.

Batman/Superman #31 includes more character bits, as the World’s Finest duo converse while combatting monstrous embodiments of the Chinese Zodiac (huh. I must be a Zodiac magnet) through stunning Mahnke art. Mahnke is reliably consistent in his stunning knack for detail and sharp storytelling, and it is treat to read a comic featuring two comic book icons in his art. Jaime Mendoza inks Mahnke through the entirety of this issue, which in itself is a treat to see Mahnke’s work consistently and enthusiastically massaged. Wil Quintana’s colors are considerably darker in this issue, but accordingly so, given the setting of Gotham City. Letterer Rob Leigh is given ample opportunity to letter the heck out of this story, but Tomasi and Mahnke prove that less is more, enabling Leigh’s contribution to be even more impactful.

Tomasi keeps the story moving forward, as Superman has come to Gotham not only to inform his friend, but also to ask Batman for help in locating someone. That someone becomes integral to where “Super League”/”The Final Days of Superman” will go from here and how. Through it all, woven through, Tomasi is clearly building towards Rebirth and the post-Rebirth DC Universe. And, again, I’m intrigued.

There is plenty of passion, heart and characterization in Batman/Superman #31, from Batman’s first observation of Superman’s eyes to the conversation between the two heroes as they fend off their attackers. Every decision Tomasi makes informs the readers and underscores the history shared by the Man of Steel and the Dark Knight Detective. The second installment of this adventure begins to outline the subplots and advance the plot, but also reminds readers why Superman is super and what adventures should be like when Superman and Batman team up.