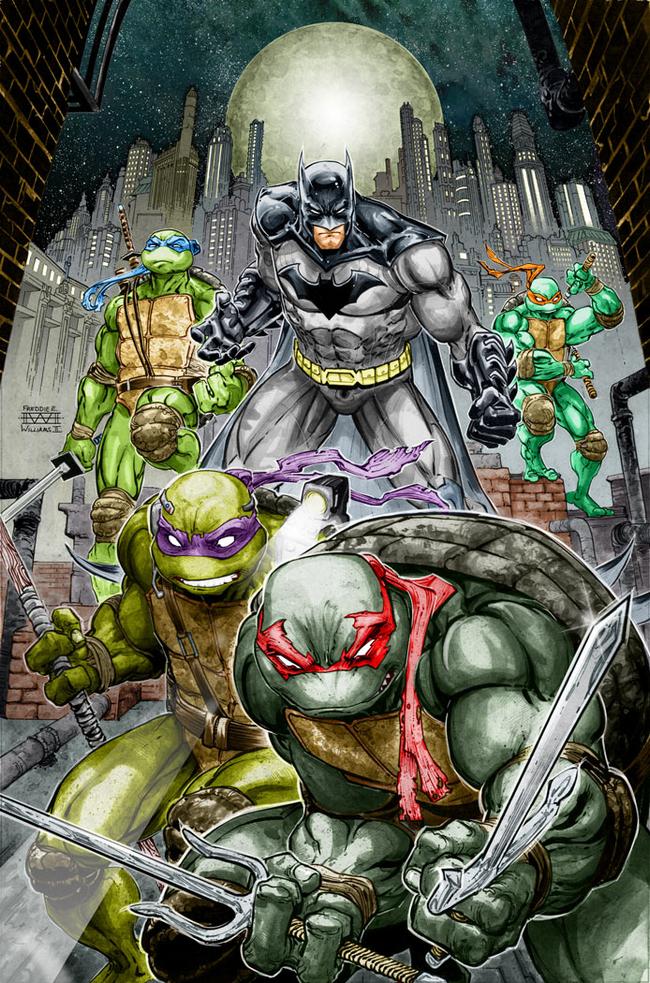 Batman and the Turtles. Worst idea ever, or just the right amount of silly fun?

I’m pleased to report it’s the latter. It is the latter, and a big reason why is James Tynion IV’s well written script. The dialogue really sells this story, as he has a great voice for all the characters in the issue. He’s very familiar with the Bat-family, but his Turtles are scene stealers even more than Bruce and Alfred, and even Shredder’s brief appearance was timed perfectly. Pulling all these characters together in a plausible way is no easy feat, but the right pieces to make this story fly are in play here. We’ve got some kind of weird gadgetry that has brought the Turtles and the Foot to Gotham, and Tynion IV makes the rest so fun to read that I really don’t give a damn about the logistics of why. The Turtles are in Gotham. It’s just…right.

Freddie Williams II’s style is a solid fit for the story and he does both the humans of Gotham and the Turtles justice. His style has just the right amount of cartoon-y elements to it to keep it lively, and I liked the first pages with the Turtles a lot. He pencils with a style that makes the Turtles existing in Gotham plausible, in a way that a hyper-picturesque penciler would not be able to. His Killer Croc is completely over the top, which is a bunch of fun, and the overall look of the book was very fitting for the script. Jeremy Colwell’s colour work drives the tone home even further and his palette is a great fit for this story.

Batman/Teenage Mutant Ninja Turtles #1 is a fun comic. It’s a good ol’ fashioned mash-up of iconic characters and Tynion IV, Williams II and Colwell sell it. This could be a gimmicky, crappy money grab, but it’s far from it. These are entertaining characters being wielded by a solid team and I’m very excited to see where this goes next.