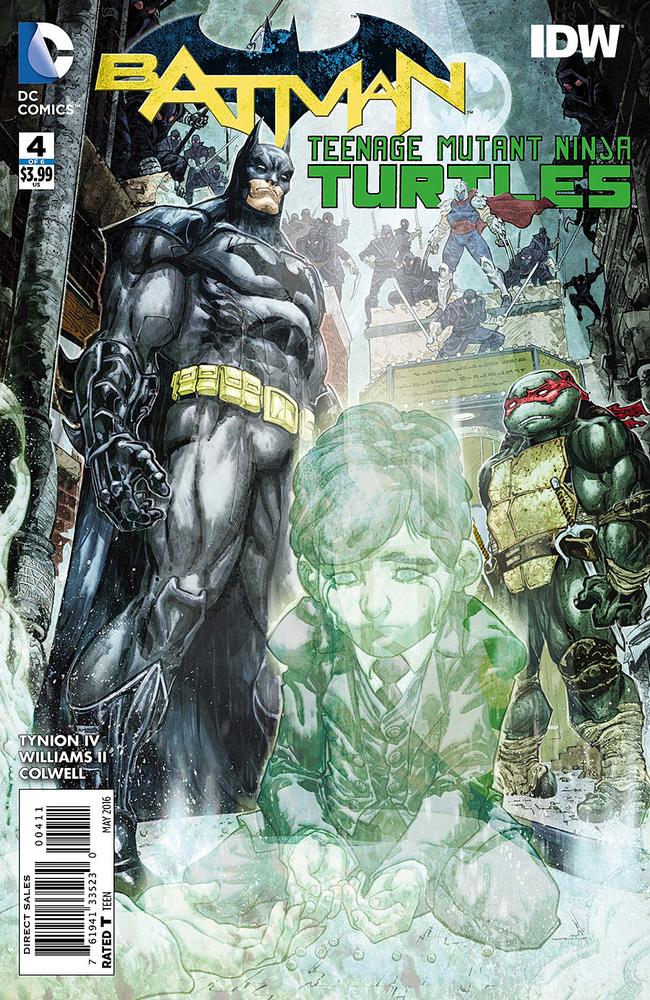 Raphael snaps, Alfred attempts to survive the Turtles’ ways and the mystery grows deeper as this excellently executed mini-series moves along.

James Tynion IV is dialed in with this series and issue #4 features some fantastic dialogue and fun twists and turns. The way Tynion is weaving the unique elements of the world of the Turtles into the pillars of Gotham is fantastic, and how he’s building Shredder into one of the worst foes to ever hit the city is just excellent. I’ve said it before, but this series could be a colossal trainwreck if not for Tynion’s skilled take on the characters and what it would look like if their worlds collided, and he delivers another very entertaining script here. He captures the personalities of the Turtles very well, juxtaposing Michelangelo and Alfred very well in many scenes. The utter joy in Donatello whilst in the cave and the unbridled rage coming from Raphael are perfect, as are Batman’s responses to the heroes in a half shell. The situation keeps getting worse as these heroes are drawn closer together and Tynion’s masterful cliffhanger actually outdid the last one, which I wasn’t sure was possible. This script is the work of a skilled writer and he gets a lot out of these characters, to our benefit as readers.

Freddie Williams II’s work continues to impress as his tour of Gotham’s high points continues in this issue. The task set out before him is integrating the Turtles into the entirety of Gotham without them feeling completely out of place, yet out of place enough that they are obviously not from this world…and he nails it. His art reminds me of early issues of TMNT without some of the trappings of the older style, and he tells this story very well. He’s got a huge cast of diverse characters to work with and despite the differences in Turtles’ appearances really boiling down to their weapons and mask colours, he gives them different body language that lets their personalities shine through. He handles the action and the dialogue heavy moments of this issue well, particularly where Raphael’s rage is concerned. Credit to editorial for thinking of this matchup of artist and subject matter because Williams’ work suits this mash of characters perfectly. Colwell’s colour game is strong with this issue and he continues to use the dark palette that has worked so well in previous issues. His colour work sets the tone nicely for this story and he does a great job working with Williams’ pencils for a great looking final product.

Batman/Teenage Mutant Ninja Turtles #4 drives the story closer to the finale in unpredictable ways that are just plain fun. Tynion & Williams are excelling at making the best pieces of both worlds work together with this crossover and, assuming it finishes as strong as it is now, I’m going to be real sad to see this one go. This is an entertaining comic and if you grew up enjoying either of these franchises, you need to do yourself a favour and let James Tynion IV, Freddie Williams II and Jeremy Colwell blow your mind with this great series.