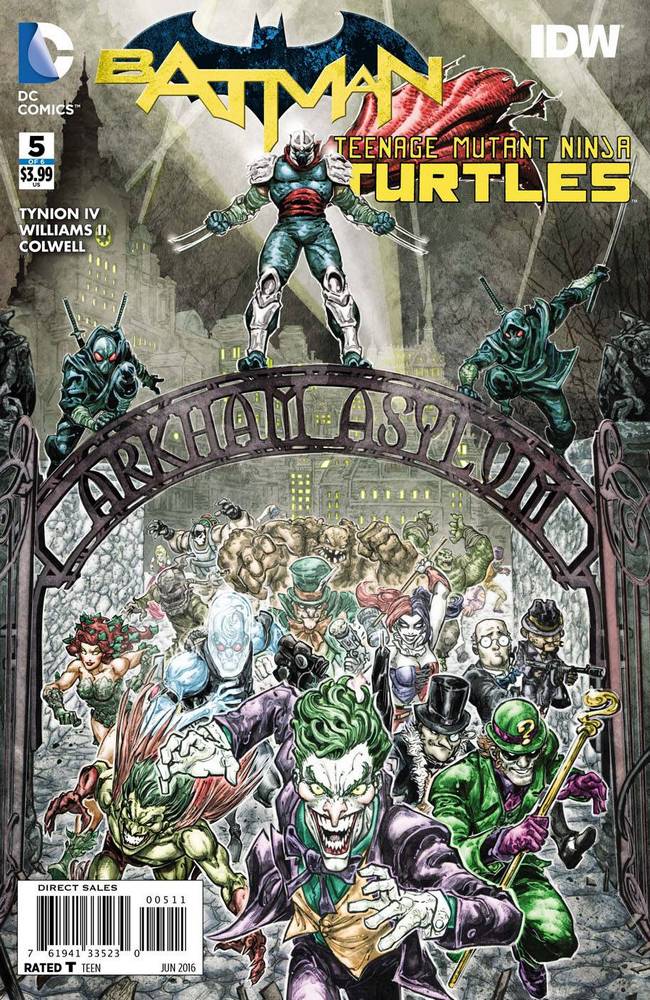 The final pages of issue #4 were rather ominous….and now we know why. The franchise crossover that is entertaining as can be continues as time runs out for our favourite Heroes In A Half Shell.

James Tynion IV’s masterful combining skills continue as he uses the unique aspects of Gotham to merge with the unique world of the Turtles to create a ton of fun. The Turtles eating pizza in the Batcave? I’m still astounded this is happening in front of me as I read it, because it is completely insane and I love every second of it. The story arc of this issue is interesting and I love the Tynion discusses Shredder. Batman’s rogues gallery is amazing, and many are in play here, but the reverence with which Shredder is spoken makes this whole team-up work. Shredder being a heavy hitter villain makes the Turtles necessary as Batman’s allies, not just another ninja for Bruce Wayne to deal with, and Tynion has done a great job of showing that. Throughout the issue, the dialogue is on point. Each of the Turtles’ unique identities is easily recognizable despite their mask colour, and Tynion’s work with the Gotham characters is on point, as should be expected. He handles Bruce, the villains and Damian very well, with no one ever feeling like window dressing or there for a simple token appearance. He has managed all aspects of this crossover very well and created a compelling story that is tense and full of action. This is top flight comic writing, and it stands tall with the entirety of the Batman line and the exceptional Teenage Mutant Ninja Turtles series at IDW.

The art ain’t shabby, either. This is an understatement, as Williams and Colwell seem to only get better as this series progresses. They have a huge, diverse cast to work with and they bring the visuals of this issue home with what appears to be ease. Much of the Turtles’ individual personalities is shown through their body language, which Williams does a great job with. Damian’s stoic nature is captured brilliantly and Williams’ Commissioner Gordon is a character I want to see in every Batman comic right now. The nostalgia flowing through these pages is amazing, yet Williams doesn’t rely on it to make the story work. His pencil work is fresh and current with a flair for some of the cartoon aspects of both properties and it works. Colwell’s moody, dark colours make the pages scream “Gotham” and set a somber tone for the dark part of the story that is coming. Props to editorial for putting these two collaborators together on this art team, they’re building something truly awesome.

Five issues in, I keep growing more impressed by Batman/Teenage Mutant Ninja Turtles. This is a well written comic with exceptional artwork and I can’t think of a better crossover that has stayed true to the fundamentals of both series and using the strengths of each to create a story that is flat-out entertaining. Tynion, Williams and Colwell are killing it with this series and I can’t wait to read issue #6.