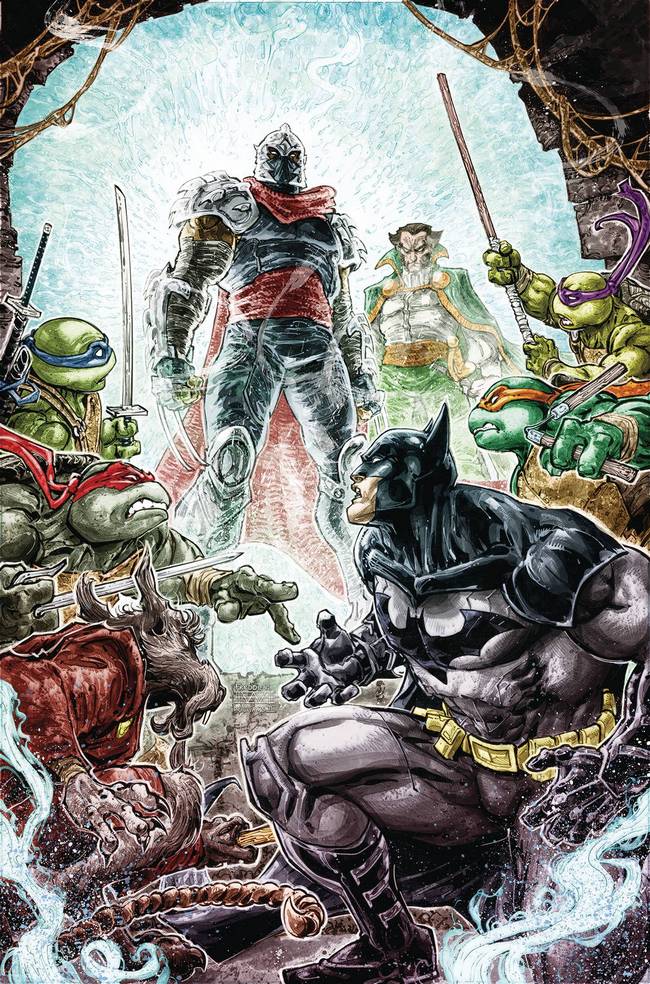 It’s time for the inevitable battle royale we’ve been waiting for: Batman/Turtles vs. Shredder/Foot/Ra’s/Arkham inmates. It’s as fun as you’d expect it to be, and Tynion & Williams close this mini-series out nicely.

Tynion’s excellent writing continues as the best miniseries of 2016 winds up, as he gives readers some great moments with a ton of different characters. Bruce, Damian and the Turtles get their appropriate screen time and there are some great moments given to the villains, as well. Tynion has a lot of stuff to wrap up in this issue and he gets the job done, delivering a conclusion we knew was coming, but in an entertaining way. The interactions between the Turtles and Batman have been one of the strongest parts of this series all along, and that continues with this final issue. If there has ever been a case for a Batman/Raphael buddy-cop style book, this is it…and I would buy that book in an instant if Tynion was writing it. These characters are explosive, dynamic and interesting by his hand, and I’ve been truly impressed by what he’s done with this crossover that could have easily been a dumpster fire.

Freddie Williams II deserves as much credit as Tynion for making this whole thing fly, and he executes this issue very well. The mutated Bat-villains, in particular, are awesome visuals and Williams clearly had some fun cutting loose with them. The mayhem of the battle royale featuring all the characters are some great pages, and Williams gives this issue the big explosive flourish it deserves to cap this tale. I particularly enjoyed how expressive he made characters who were mutated or in masks, some artists make the Turtles very void of personality, but that is not the case with Williams. His style, when coloured by Jeremy Colwell, has just the right levels of Gotham grit and Turtles cartoonish-technicolor, and the net result is a story that is written well and features fantastic artwork. Should Williams ever work on a Turtles book again, I’ll be reading it no matter what.

Batman/Teenage Mutant Ninja Turtles #6 caps off a wild ride that has been one of the most entertaining comic book series in 2016. This could have been (and I was damn sure it was going to be) a train wreck, but Tynion and Williams crafted a story that brought two properties together and played off their respective strengths, leading to a comic that was a whole lotta fun to read. Should there ever be a sequel (and there damn well should be), I’ll be welcoming it with open arms. It was wild from the start to the finish and the team stuck the landing, and I’m delighted I decided to give this one a go at issue #1.