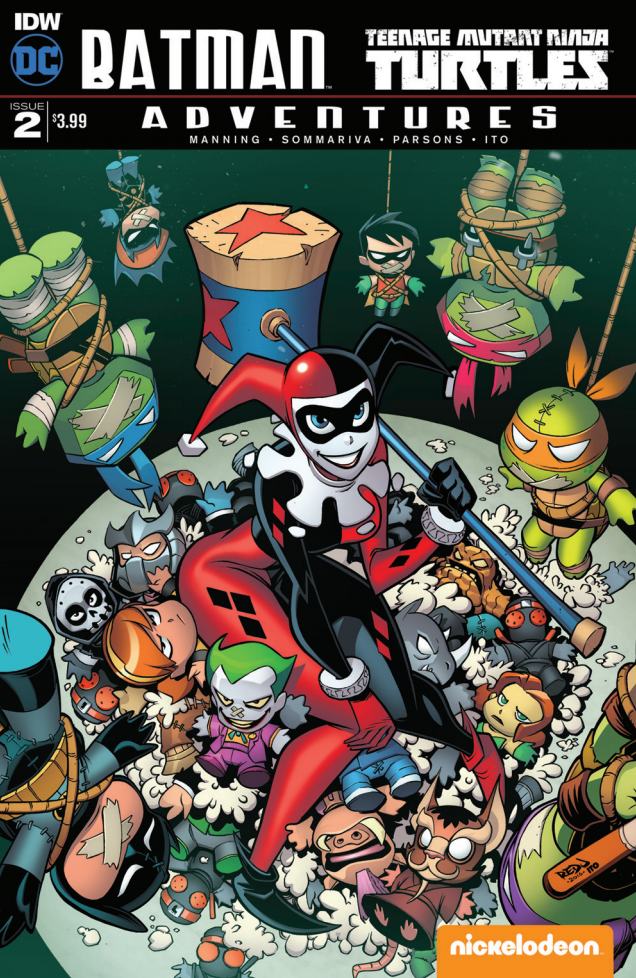 I’d like to applaud whoever it was that first had the inkling of the idea to mash-up these two animated worlds. I’d like to then applaud every single person along the chain of approvals that made this come to pass, who then also hired Manning, Sommariva, Parson, LaPointe and Ito to craft this comic because this is just a riot.

That sentence was almost as long as the title of this book, but my excitement for this series after reading this issue is like a runaway train. This comic made me laugh, made me happy and brought a lot of joy into my head for the time I was reading it, and I’ve had a stupid smile on my face for a really long time since! Manning and Sommariva capture all the best aspects of the animated worlds with their work, from the visual aesthetics to the Batman’s cartoonish brooding and the Turtles extreme energy. This truly feels like I’m reading a cartoon that I never knew I desperately wanted, and now that I’ve read 2 issues I can’t wait to get the rest in my hands.

Manning is quick with the jokes, but not in a pain-in-the-butt way. Those who know me know that I’m far down the list of the Joker and Harley’s greatest fans, and the likelihood of me ever being a card holding member of their fan clubs is non-existent. But, I ACTUALLY DIDN’T HATE THE JOKER OR HARLEY IN THIS COMIC.

I’m as shocked as you are.

That’s all because of how Manning wrote them. They have the perfect balance of over the top cartoon villain without the darkness that does not intrigue me at all, and I was flooded with memories of Batman: The Animated Series while seeing these characters on the page. There’s something nostalgic and comforting about Manning’s take on the characters, but they also feel fresh and full of energy. He isn’t just pulling dialogue straight from the cartoon and dropping it into the Turtleverse, but rather channeling what made these characters great in the animated world and really cutting loose with them.

The same can be said about the Turtles, who are not accessories to the Bat and his crew in this issue. Manning does a great job balancing the two properties, ensuring this is neither a Batman & his sidekick Turtles comic, nor a Turtles comic guest-starring Batman. Each franchise feels at home in this shared space and I really enjoyed how Manning flipped the whole heroes-battling-heroes-when-they-meet-for-the-first-time trope over before it got stale. The Turtles are great foils for Batman’s grumpy demeanour and Manning uses the strengths of each team very well.

Jon Sommariva channels the animated worlds of these characters in a way that is still quite astounding to me, with each page looking like it could come to life and start moving at any second. He manages to make this feel like a comic and not just a collection of animation stills, though, like some reprint-from-TV comics tend to feel, which also baffles me. His skill with the giant cast amazed me and the tone he sets with his artwork is pitch perfect. Manning’s gags don’t work without the art selling the joke and Sommariva never drops the ball with a single character in a single panel. This is absolutely fantastic, all-ages safe but not just for kids artwork that delighted me with ever page flip.

Leonardo Ito’s colour work drives home the animated feel, bringing these characters to life in a vibrant way that is loud and playful without ever being over the top. He captures the energy of the characters with his palette and works seamlessly with Sommariva to deliver artwork that is pitch perfect for this project and a true homage to the best aspects of these animated worlds.

Batman/Teenage Mutant Ninja Turtles Adventures #2 is the most fun you’ll have reading a comic this week…and possibly this month. This issue is safe for kids but certainly not just for them, and any fan of either licensed property will find things to love in this comic. I’m truly blown away by how well the team is merging these animated worlds and delivering a fresh story that feels like the cartoons I loved as a kid, and I’m totally on board for the next issue.