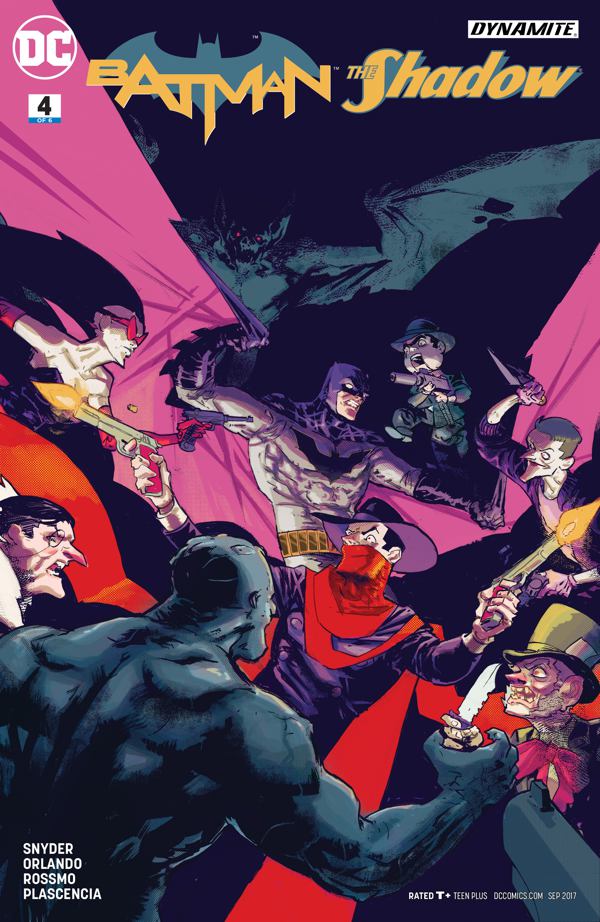 Dangers surround Batman! Captured by the Joker and the Stag, Batman finds himself encircled by a slew of his rogue gallery. But will Batman be able to get out of this fight unscathed? Find out in this latest issue of Batman/The Shadow!

Orlando never ceases to impress in this strange yet perfect crossover event. This action packed issue allows the Joker to ham it up all over the place, engaging with panel after panel of delightful wordplay and quips with Batman. While everything the Joker says in this issue is sheer gold, I would say my favorite line comes from a sick vintage burn the Shadow gives Batman early on in the issue. The only thing that would make this issue better would be maybe the Joker and the Shadow just teaming up to deal burns to Batman, but hey, I am perfectly satisfied with the awesomeness I’ve gotten thus far.

What I found the most interesting in this issue is the realization I had about the characterization of the Shadow, Batman, the Joker, and the Stag. While the Joker and the Stag align more in their goals, surprisingly, the Joker and the Shadow’s personalities and Batman and the Stag’s personalities are more similar. Since the Shadow has remarked in previous issues on how he used to be as depraved as the Stag before he was chosen to become the force of nature he is, it makes me wonder how close in nature Batman is with the Joker, what that says about their relationship. Just some food for thought, I suppose.

I’m not sure who exactly is in charge of panel layout in this comic, but whoever it is, they deserve all the awards. Each page is mesmerizing, whether it be the off kilter panels or the spiraling panels of “NO” as a certain someone slowly loses consciousness after a near fatal wound. The whole layout adds that extra something that makes the comic drawing and I really appreciate the effort taken to make many, if not all, the pages pretty unique. I don’t see that amount of time taken into panel layout usually.

I’m in love with Rossmo’s art and Plascencia’s coloring, I’ve talked about it a lot in previous reviews of this comic, but I think they’ve really hit it out of the park in their two-page splashes. There are several of them in this issue and they are mystifying, creating grand fight scenes with otherworldly properties involved. I’m honestly not sure what I want more – more of the unique paneling job that perfectly encapsulates their work or more of these two-page splashes of epicness.

Read this. Read Batman/The Shadow right now. It is a fantastic crossover event and I wish the crossover would last longer than just the six intended issues.