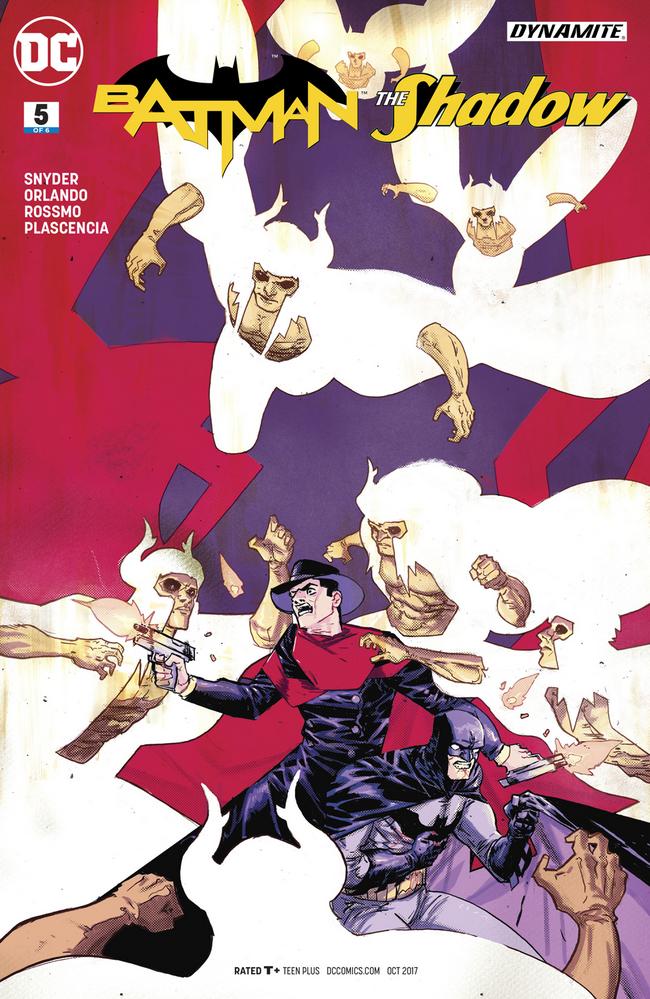 Batman has been stabbed by the Stag’s blade! As Batman tries to keep it together, will he succumb to the deathblow that prehistoric dagger interwoven with metaphysical circuitry dealt him or will he be able to continue his fight against the Stag and the Joker? Find out in this exciting issue of Batman/Shadow!

Orlando is such a magnificent writer. The Joker, as always, is the hammiest ham to ever ham on this side of ham town and it is sheer gold. Everything the Joker says is entrancing and great, from his speech about his compatibility with the Stag to his clever quips with the Batman himself.

I love the general dark comedy edge to a part in the story that should be extremely intense, especially with a high chance of Batman dying. I love how the Shadow’s interactions with Alfred in the beginning are hilarious and I just love Joker’s entire existence in this comic.

I also love that the reader can truly understand the distinction between Batman and the Shadow in this issue. Batman was never anything like the Shadow. He is one of the best of the best. He has always been a good person and believes in the goodness inside others and the power of reformation. Batman could never be a replacement to the Shadow, could never be exactly like the Shadow if he ever succeeded him. Lamont was a terrible human being, and as such, that shaped his ideas about other criminals after he was reformed by the teachers from Shamba-La. He doesn’t pretend to be a good person, but he does feel remorse, and in order to repent, he sends those he deems worse than himself to their graves. The difference is what makes their characters’ interactions all the more intriguing.

The art is so beautiful. I love what Rossmo does with the Shadow’s scarf, because it seems as if it has a mind of its own, just wrapping around the Shadow, floating across the panel like a red, well, shadow. The cave in general is captivating in this dark way, like a primal evil ready to unleash. The not exactly skeleton corpses but are basically skeletons hanging everywhere was a nice touch too.

And the paneling! I don’t know exactly who decides how the panels play out but the panels are phantasmagorical! I love how well thought out they are, especially when the Shadow and Batman enter the cave. There are several pages where the panels are all different size and are all set in a Dutch angle and it conveys a clear sense of chaos and the unknown, as if otherworldly events are about to take place. It’s brilliant.

What have you been doing with your life if you haven’t been reading Batman/The Shadow? Seriously, this series is so good! It’s well written, it’s well drawn, and the conclusion will be out next month so be sure to read all five issues that are out if you haven’t already!