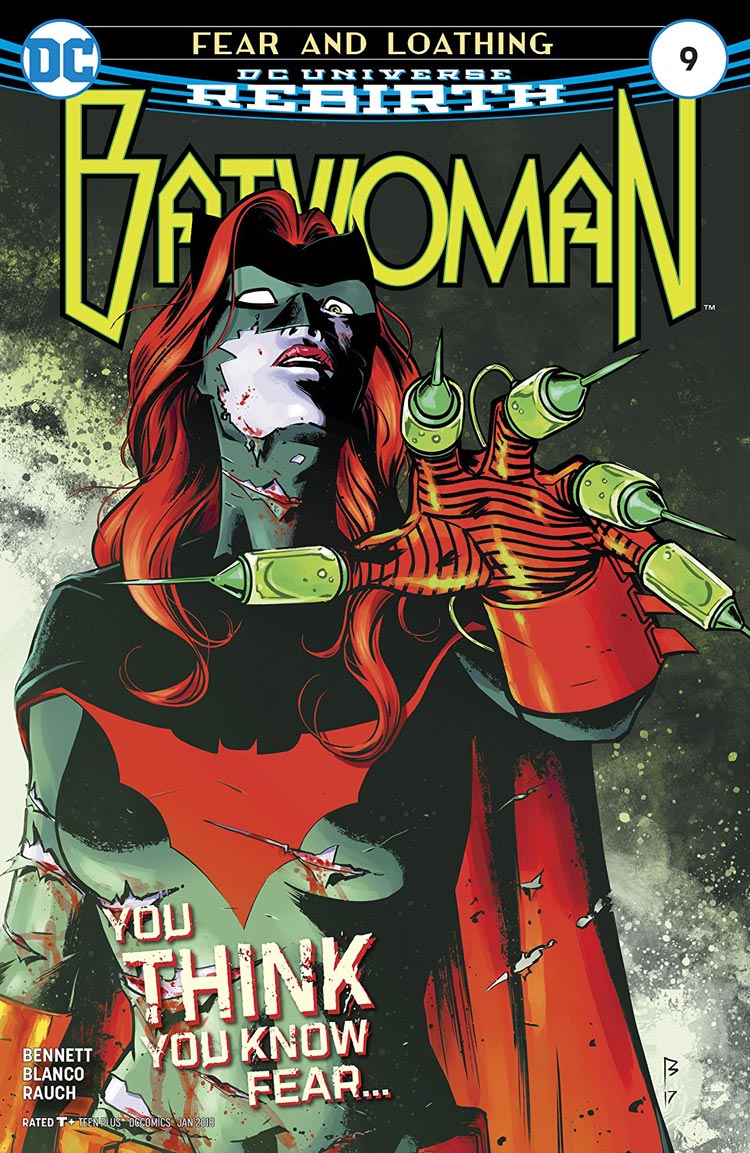 Kate Kane has never once succumbed to fear, so what could the Scarecrow’s toxin possibly do to her?

We find out in this issue as she and Colony Prime are drugged up and hallucinating. Kate sees her surroundings as a nightmarish version of Wonderland — fitting, considering her twin sister Beth’s relationship with that motif — whereas Colony Prime sees everything as a video game.

It’s an odd fear, as I don’t know of anyone afraid that they’re spending their entire life inside of video games. *stares into camera, coughs* Moving on, then.

I’ve read all of Marguerite Bennett’s DC Bombshells issues, and one of her recurring themes is never surrendering to adversity. She’s a match made in heaven for Batwoman. Kate Kane is defiance in the face of lies, fears and self-doubts. She feels shame, guilt, and fear, of course; but she rejects the notion of ever being ruled by them.

“I’m not defined by my scars,” she states towards the end of the issue, just before showing Scarecrow that he has grossly underestimated her.

Batwoman has always been a title laced with horror imagery, even in her own slightly vampiric design, and Fernando Blanco nails it. From severed heads to multi-limbed monstrosities to an absolutely terrifying sequence of Kate deliberately using Scarecrow’s own scheme against him, the art is deeply unsettling and fits this particular arc perfectly.

John Rauch uses a watercolor-esque technique mixed with occasional old-school dot gradients here and there to add to the surreality. Everything looks slightly gray-washed, and combined with Deron Bennett’s lettering and creepy word balloons, gives this issue a look that wouldn’t have been out of place among the old EC horror titles of the 1950s.

I was tempted to quote Kate’s speech to Scarecrow towards the end of the issue, but it’s so good and so definitive of who she is that I can’t bear to spoil it. Buy this one, because it’s a great arc and ends on one of the most bad-ass cliffhangers I’ve seen in a while.