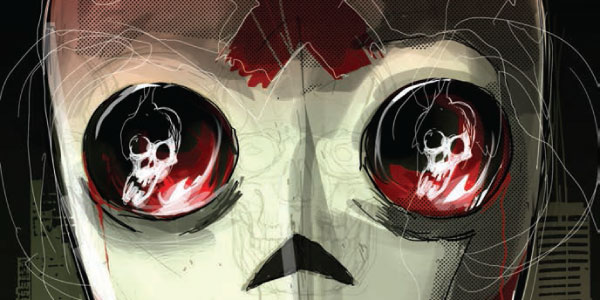 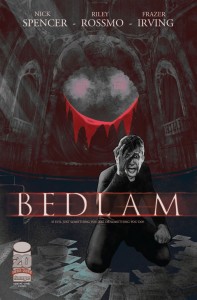 Ten years ago, the serial killer Madder Red terrorized the city of Bedlam, cutting a swath through over two thousand victims, culminating in an opera house bloodbath. Armed with an ultimatum and a deadly bomb, Red seemingly died, leaving the police and city residents none the wiser about his motivations and methods. Today, Bedlam is experiencing a new rash of serial killings, and their best hope may lie in the man that wore the bloody mask all those years ago. The question is, can you ever be cured of the type of madness that drives mass murder? And even if you can, how could you possibly make up for what you’ve done?

Spencer begins his new creator-owned ongoing series with a trick: the rather straightforward homage to classic super-villainy. It’s difficult not to spend a bit of time, at least initially, counting the ways in which Madder Red mimics the Joker — bloody smile against a white pallor (albeit mask), playing cards in hand, a sharp wit all the while setting himself up to get caught by the city’s slightly generic caped crusader. In this regard, I didn’t find the character of Fillmore Press, the former serial killer, to be that compelling in this first issue. Once you take the crazy out of a figure like the Joker or Madder Red, there’s a feeling that you’re can only be left with the equivalent of a sad clown or deflated balloon — something that once was grand and entertaining now worn and empty. I’m not sure if Spencer can overcome this impression, but the mysteries behind the premise definitely make me curious enough to follow up. How exactly did Red fake his own death? Who is the Good Doctor and how did he rehabilitate this monster? And just whose voice (Real? Imaginary?) is that echoing in Fillmore’s head?

A real treat, however, is the interior pencils by Rossmo and colors by Csuka. Rossmo’s Madder Red is rough hewn and worn around the edges, as if appearing in an old Super 8 film reel or fleeting nightmare. Almost vibrating against often-plain backgrounds, figures and spaces in flashback scenes take on an ethereal temperament in comparison to the more solid modern day scenes. The expressiveness behind Rossmo’s line works both to give life to Red’s otherwise emotionless mask and drain equal amounts of energy from his uncovered face. Csuka’s colors — black, white and red in the past and sedate, hollowed out earth tones in the present — add an enormous amount of to the sense of what’s changed over ten years. Fillmore Press is not a man freed to clarity in his recovery, but rather dulled down to reality from a much more hyperbolically murderous pre-sanity state. The resulting combination of the two artists’ work is not only beautiful, but curiously may express more about the story’s main character than the script itself.