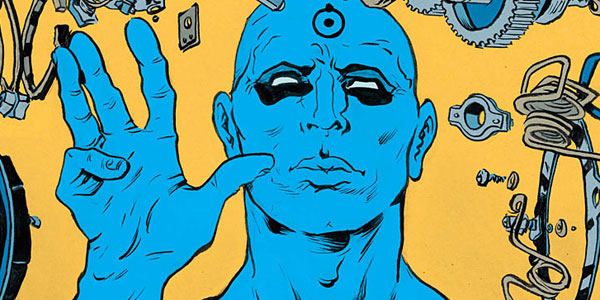 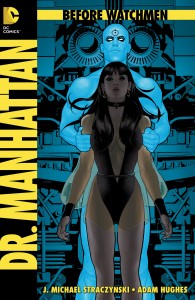 The final Before Watchmen mini-series launches and it may hold the key to the existence of this entire universe.

In the original classic, Dr. Manhattan is quite the paradox. He’s all-knowing and all-powerful, having complete control over his quantum state from the time of his “creation” in a Marvel Silver-Age style accident onward. Simultaneously, he is always impotent (insert tasteless blue joke here) to change what he always-already knows is going to happen. In a sense, he is just going through the motions.

In this first issue, all that may change. Straczynski crafts a scenario for the big blue man that removes that impotence — not literally — and enables Dr. Manhattan to once again have the agency he had as a human being, and still keep nearly his near omnipotent powers as well. It’s a tale particularly crafted for the comic book medium, one in which reality can shift from panel to panel and whole new worlds can be mirrored down the center of a page. One wonders if the author’s intentions here have greater ramifications for the entire event. Could we have been reading a different quantum comic book universe all along?

The art by Hughes is truly exceptional, and worth the price of admission all by itself. That we haven’t seen a series of interiors by the artist in nearly a decade makes the book an extra-special treat. What should not go unmentioned, however, is the contribution of Laura Martin on colors. This book would be significantly lesser if not for her contribution. There is one particular trick in the book involving color that is so simple, yet so genius, that it actually made my designer core self giggle.

These series have been admittedly controversial, but now having begun the final installment, it’s clearly not over the issue of quality. DC has committed the very top talent — heart and soul stuff — to these books and it shows on every page. No matter what your convictions, it’s hard to argue against that.