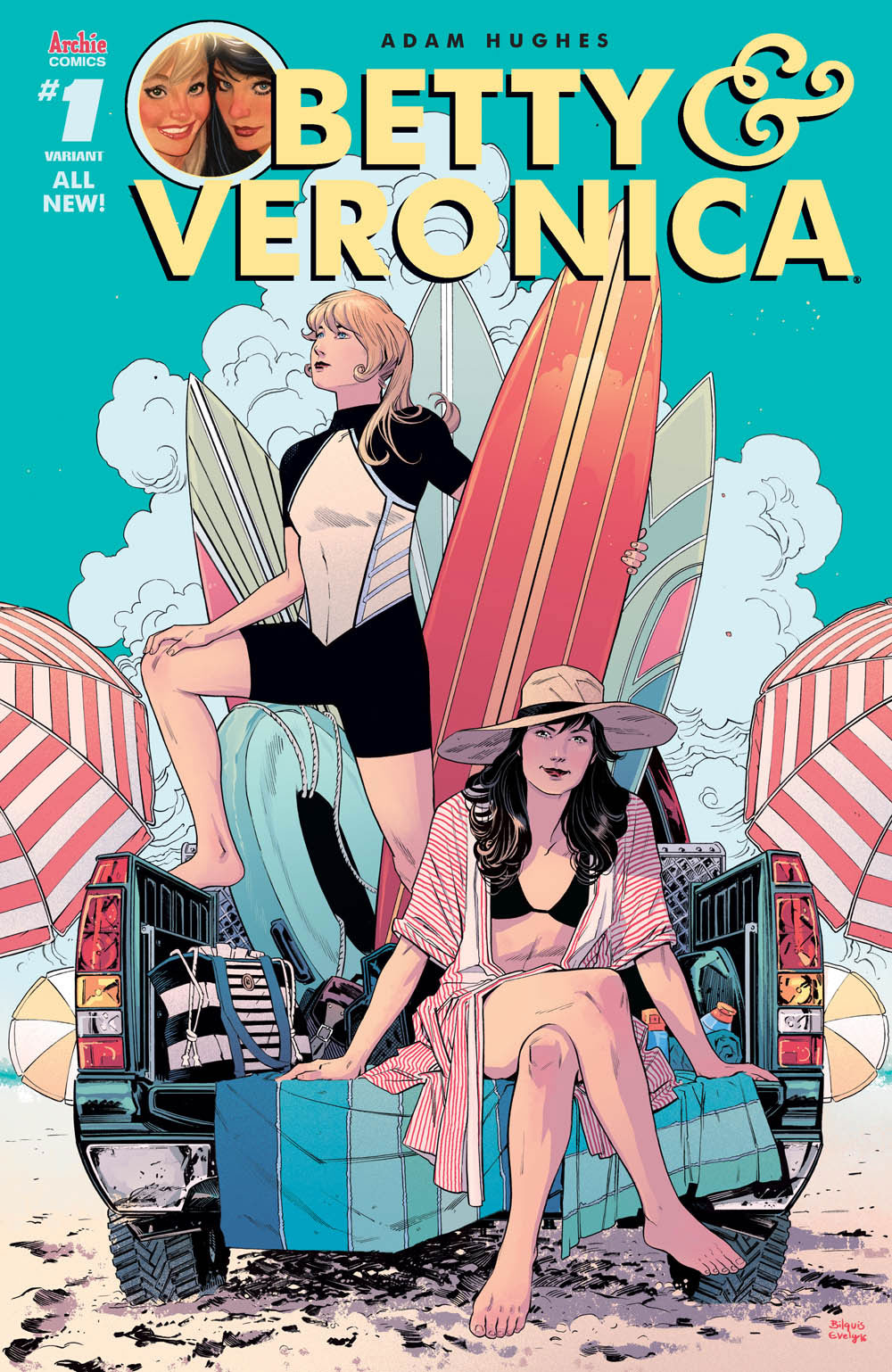 Something fishy is happening in the town of Riverdale, and it all starts with Pop’s Soda Shop going under. But Betty Cooper isn’t going to stand for that. As she starts to rally the troops, it becomes more obvious that there’s one thing she hadn’t counted on, standing in her way — Veronica Lodge, her best friend.

When Adam Hughes was announced as the writer/artist on a new Betty & Veronica relaunch, there was an enormous amount of criticism leveled at the appropriateness of Hughes’ art for the book. Yes, the artist is known for pin-up style material, but I see a pretty wide line between him and the likes of Frank Cho, whose work deliberately pushes into objectification and oversexualization of its female subjects.

I defended the choice of Hughes, and felt (and still feel) that it was a positive break from what was quickly becoming a new Archie house style in Archie, Jughead, and the forthcoming Josie and the Pussy-Cats (although one I find very fun and fresh, as well). Archie has a history of house style that overrides identifiable artistry, and I’d hate to see that return.

So, it’s with no surprise that I come into this issue with very few qualms about the art within. The surprise came in the shape of a narrative structure and scripting that was far more problematic than most critics imagined the art would be.

Indeed, the art is strong. Hughes captures a realness to the teenagers across the board, giving us a wide range of classic and wacky facial expressions, humorous poses, and thoroughly detailed backgrounds and environments. It’s everything Hughes made his early career on with the likes of Justice League International and M.A.Z.E. Agency.

The first bit of trouble lies in the fact that you can barely see any of it.

The maddening verbosity of Hughes’ teenage dialogue, while ringing true to both the age and socio-economic status of the four main characters, totally obscures any appreciation of Hughes’ artistic craft. The writer/artist seems to be working at cross-purposes, delivering a gorgeous page only to have it plastered upon by word balloon after word balloon. After word balloon.

But the real trouble in Betty & Veronica is this: there is no Betty & Veronica. In fact, there’s precious little Betty and precious little Veronica, ampersand be damned. There’s a deep dive in the mechanics of Archie and Jughead’s friendship, with page after page of their dialogue sometimes referring to the women in question (most of the time not). There’s a bit of Betty’s now-trademark firebrand monologuing, although even that takes a backseat to nearly every other character in the book.

The lead characters are so backseat in their own issue #1 that Hughes has a dog narrate instead of the women themselves.

Imagine that. Two of the longest-running female characters in comics, and you can’t even narrate your own story. A dog does it instead.

This is hardly the most egregious bit of misogyny built into the narrative structure of the issue, but it does highlight overwhelmingly what it means to push your female protagonist to the backseat of their own story. And it begs the question: who is Hughes writing for?

Because when your writer literally has a dog narrating your female leads lying around in bikinis on pure white page, with “And they’ve agreed to do so while wearing swimsuits, in case that was the comic you were expecting.” I don’t know what other conclusion to draw. It seems pretty clear who the target audience is, and what’s implied by their expectations. Suffice to say, it’s leaving my pull list in haste.

This one is a real shame, and not because I wanted Betty & Veronica to be something it’s not. I was expecting conflict. I was expecting women who literally cannot get along to save their lives. But I expected it to be as well-thought-out and progressive as Archie Comics’ entire line has been since their revolutionary shift several years ago. And I expected Hughes to not disrespect his characters into the background, only to expose them as objects for a puerile gaze. Heck, I expected it to be about the characters named on the cover. This issue failed on all three accounts.