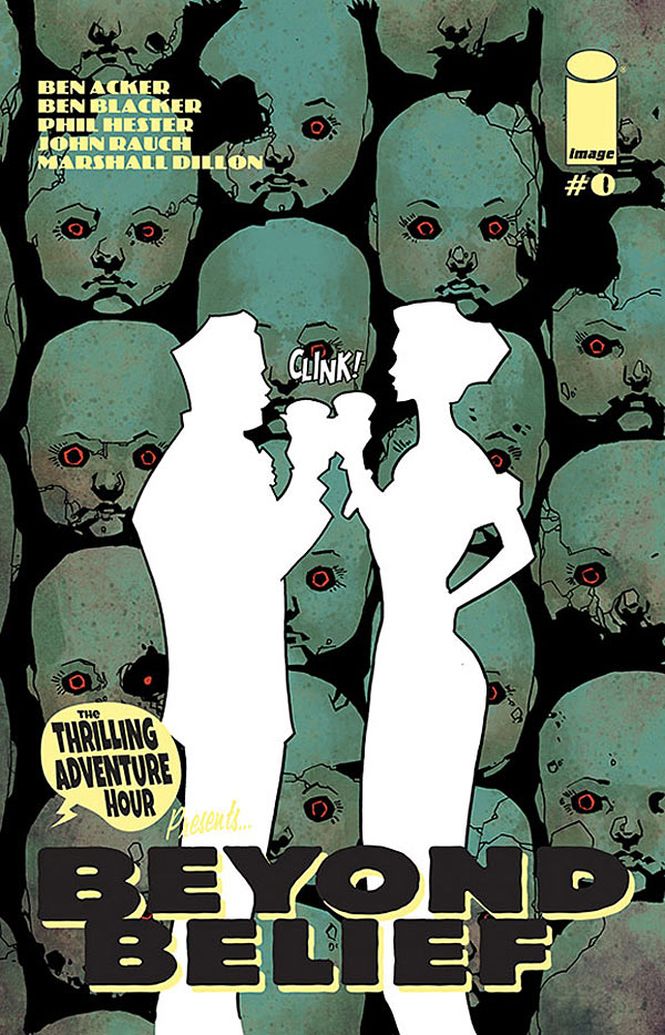 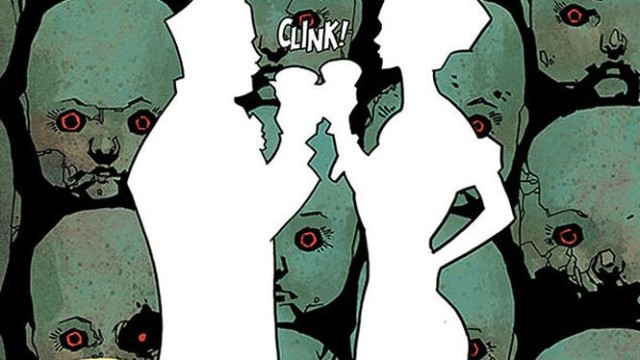 Have you heard of The Thrilling Adventure Hour? Of course you have. But in case you haven’t, here’s the skinny. TAH is a staged production show in the style of live radio — imagine if you were in the room while one of those old-timey-radio shows was being made, and you’ve basically got it. While I haven’t listened to much of it, one of my best friends is really into it and what little I’ve heard of the Cactoid Jim segments has consistently made me laugh.

I decided to pick up Beyond Belief #1 because, among the other snippets I’ve heard through my friend, Tumblr, etc. about TAH, Frank and Sadie Doyle have been among the most intriguing. The issue is the comics premiere of the two characters, a married upper class couple who occasionally solve paranormal mysteries.

The issue contains two stories and spans forty pages. Eric Gapstur does the inks for both, but is paired with Ande Parks for the first story and Mark Stegbauer for the second.

In the first tale, the artistic style is largely consistent, but there are some notable variations. For example, Sadie generally appears to have blue eyes — except for a few panels where her eyes are inexplicably dark. I read some of these sections a few times to understand whether this was a choice that was meant to have some narrative content, but couldn’t find any reason for why her eye color would change.

There’s also some pretty significant tension between how the characters are depicted at a distance versus close-up. Naturally, at closer shots we get more detail, more shadow, and more shape. This collapses as we distance ourselves further and further from the scenery and characters. With the first half of Beyond Belief #1, however, I often felt not only that the given distance didn’t frequently didn’t justify the given collapse but also that the style of the collapse itself didn’t quite fit with the close-up material. The shifts in distance could have been more seamless and less visually jarring.

The second half was much more consistent and solid in both regards. The shots at a distance are entirely cohesive with their close-up counterparts and, for the most part, seem to scale back proportionally. The sole inconsistency I would note is in the inking in the first two pages of the story relative to the rest. The lines are thicker and heavier initially and then lighten up significantly for the rest of the story. There’s no narrative explanation for why that would be, so I’m not sure why that difference has occurred.

Still, the style is much more engaging and expressive. Frank Doyle has a face beyond his mustache and the ghosts who appear in the second half are rather cute–the Hellhounds in particular are actually my favorite, especially with the reveal on the last page.

Lastly, the coloring in the second story adds more a bit more contrast to how supernatural elements appear. They are much more solid in Rauch’s take as compared to Wallace’s, but this solidness actually stands to make the ghosts more “believable,” if such a thing could be said. They hold their form better and seem to be real entities.

The second tale, “A Spirited Romance,” also has the better story. In it, we are given Frank and Sadie’s meet-cute, the beginning of the end so to speak. The dialogue is pleasantly witty and it’s fun to see the two of them flirt their way to a romance while dealing with a demon. We see exactly how amazing Sadie (née Parker) Doyle really is and why Frank would fall in love with her.

There’s an interesting moment that expands your estimation of Sadie, only to be turned on its head–but, for some reason, that expansion still lasts. We believe that Sadie is amazing, that she commands a room, that she might just be able to do anything. It’s a neat trick of characterization that evolves into world-building, which is a pretty cool. All in all, “A Spirited Romance” is tight, fun, and lets the characters do the work.

“The Donna Party” is not as engaging. One of Sadie’s best friends, Donna, has just moved into a house that is ostensibly haunted and of course, Frank and Sadie are immediately on the case. Here, the dialogue fell a bit flat for me, and, in turn, so did many of the quips. Humor is a tough thing, so it might be the case that this story simply didn’t line up with what I find amusing, but a lot of the jokes just seemed a bit too easy and obvious.

The plot of this little mystery was also relatively standard fare. To a degree, that was the case with “A Spirited Romance” but with the layer of Frank and Sadie’s first meeting, the whole story felt much richer as a result. With no additional narrative threads, “The Donna Party” is somewhat lackluster and relies heavily on jokes that aren’t strong enough to distract me from that fact.

In the end, though, I wonder if my reaction to the narrative isn’t a matter of audience. I’m not sure whether Acker and Blacker intended for this to be a gateway into TAH and Beyond Belief, or whether this comic was strictly “for the fans.” Without context, “The Donna Party” is somewhat thin, but perhaps it’d be a richer read if I was already a regular listener/viewer.

Regardless, I think the delivery to both audiences would have benefited from swapping the stories–starting with their meet-cute and then layering those elements into “The Donna Party” for a tale that had a stronger foundation. I imagine they did it the other way to get a kind of “and this is how they got there” sort of feel, but the second story is far away the better tale and could have been used to improve the first.

For the Thrilling Adventure Hour or Beyond Belief newcomer, I’m not sure that this is your ticket in. Paradoxically, if this issue was half its length and only included “A Spirited Romance,” I’d be inclined to encourage you to check it out, but “The Donna Party” doesn’t really do the couple or the bigger work many favors.

If you’ve got the spare cash and you already like Beyond Belief, then it’s probably worth your money–especially if Frank and Sadie’s meeting never appeared on the show. But if you’re new, at least for now, the better option is to try out the podcast and see if you’d like to come back to the comic.