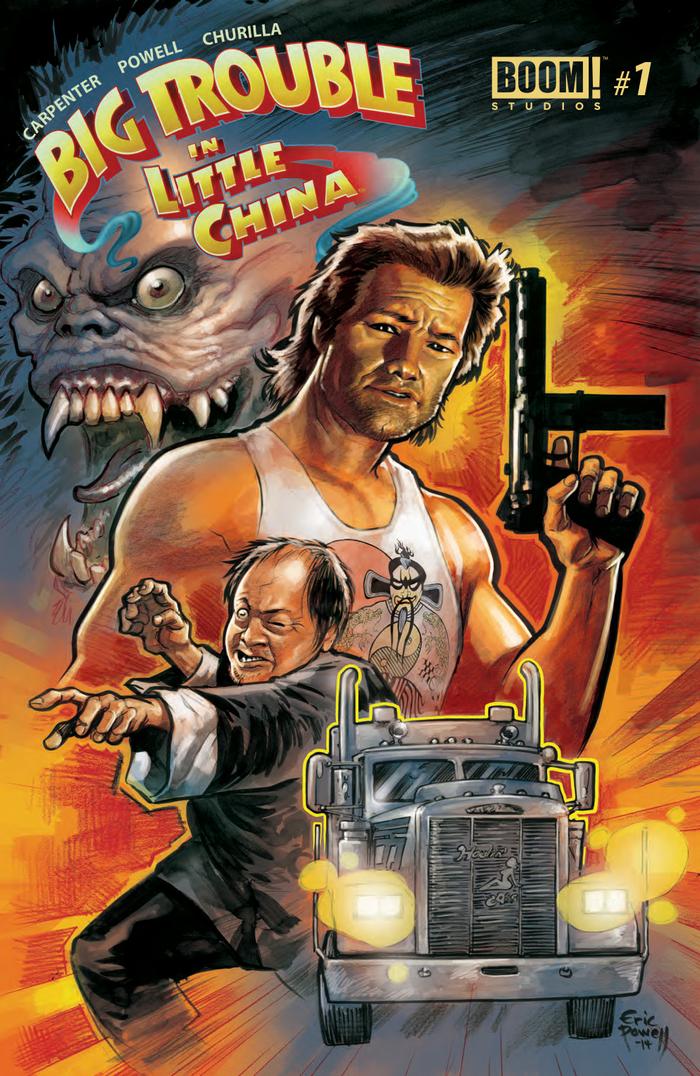 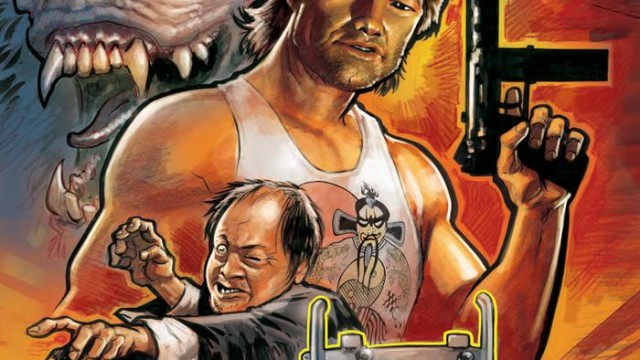 After 27 years, 11 months, and 2 days ‘Ol Jack Burton and the Pork-Chop Express are back! No, it’s not a movie, but rather a brand new Big Trouble In Little China comic book series from BOOM! Studios. If you happen to be one of the people that haven’t seen the original movie, you are missing out on a cult classic that happens to be one of John Carpenter’s best films. I suggest you stop what you’re doing right now and watch it. It is currently streaming on Netflix here in the United States, so for most of you it is a few clicks away. For those of you that have seen the movie this is the sequel you’ve been waiting for, and the creative team of Eric Powell and Brian Churilla show that the property is a perfect fit for the comic book page.

With the input from John Carpenter himself, Eric Powell pickups exactly where the movie’s cliffhanger ending leaves off. There’s no recap page covering the events of the movie, no explanation of what Jack Burton had just gone through, and no explanation as to how the demon on the back of his truck got there. One of the beauties of Big Trouble In Little China #1 is that it doesn’t take any time at all in trying to fill in readers of the events that transpired in the movie. This may seem to be counterproductive, but I’d like to think that BOOM! Studios, John Carpenter and Eric Powell all realized that the people who are going to support this book have all seen the movie. There aren’t going to be many, if any, people experiencing this universe for the first time with this comic book. There is no illusion to the reality of the situation, and that freedom allows the creative team to tackle the first issue as a true sequel.

We’ve spent years wondering what happened to Jack at the end of the movie, and the resolution to the demon hanging onto the back of the truck is both hilarious, and unexpected. This is also the impetus for Jack to head back to San Francisco where he hopes to get some answers from Egg. He happens to arrive just in time for Wang and Miayo’s wedding, and as one would expect, it doesn’t go off without a hitch. The Wing Kongs are out for revenge, a new threat emerges, and Jack Burton is tasked to save the day. It is a brisk, tightly plotted issue, but most importantly, it’s funny as Eric Powell gets ‘Ol Jack Burton’s voice and humor just right. This book could have gone from a great idea to a complete disaster instantly if Jack’s distinctive voice and way of words weren’t translated to the comic page correctly. Powell alleviates any concerns on page one when Jack gives some of his classic advice over the CB radio in his truck. Whether it’s Jack praising the shopping that can be done at truck stop, telling the story of his second marriage or delivering classic one liners, the grasp on Jack’s character carries on throughout the issue. If you love the movie, and Kurt Russell’s portrayal of Jack Burton you will love the action, humor, and art in this book.

Artist Brian Churilla, best known for his ONI Press book, The Secret History of D.B. Cooper, handles the art duties here. His work is a perfect fit for the tone laid down in the script. The art is a bit on the exaggerated side, but Churilla’s Jack Burton shares an uncanny resemblance to Kurt Russell, exactly the way it should be. Whether the fight scenes feature demons or ninjas, the action scenes are dynamic, and look solid throughout. The standout sequence of the issue is Jack telling the story of his second marriage. The layout of these 2.5 flashback pages are top notch, they provide some funny visuals, and when combined with the funny script, it makes you wish for an entire story devoted to this earlier adventure. The colors of Michael Garland deserve praise as well. The color work helps Churilla’s art look even better, especially during the fight scenes. The panel where the new bad guy makes himself known, and the green just leaping from the page is a prime example of how the colors stand out.

If you love Big Trouble In Little China there is a great chance you will absolutely adore this issue. It is a direct sequel that continues the story of the movie, complete with story input from creator John Carpenter. It features classic Jack Burton, most of the characters we love, and fun action scenes all rendered in an art style that fits the material perfectly. The first issue isn’t going to win over any new fans, but it’s not trying to. This a love letter to fans of the movie, and I can’t wait to see more of The Continuing Adventures of Jack Burton and The Pork-Chop Express.