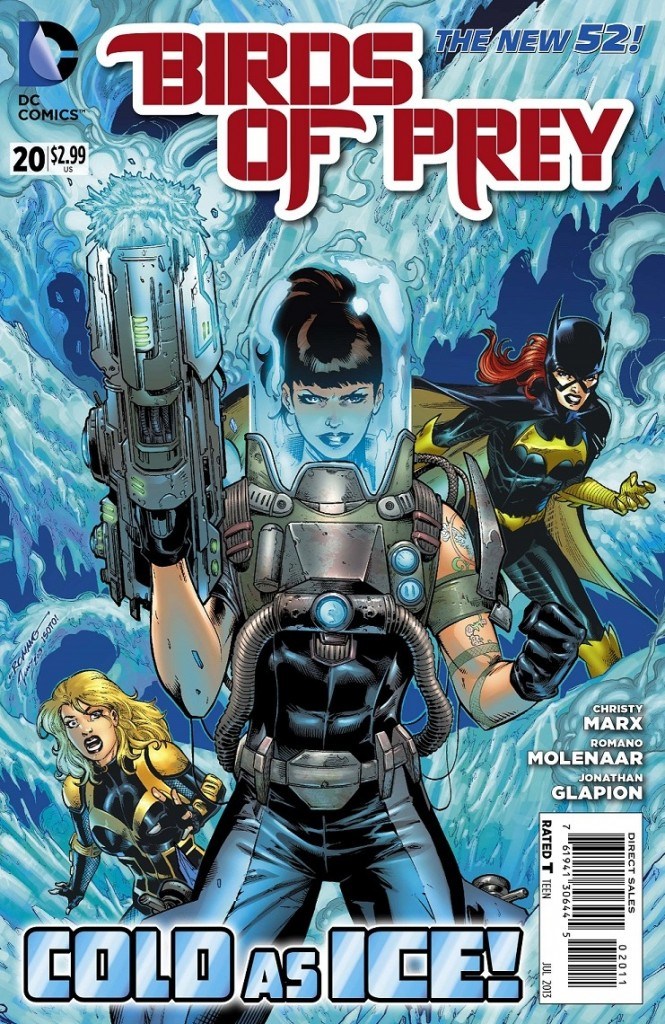 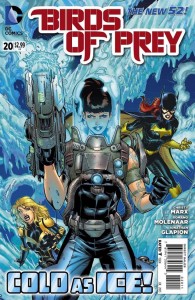 The Birds are betrayed from within as Starling teams up with Mr. Freeze to retrieve the secret behind the Talons’ cryogenic revival. It’s the Court of Owls versus Gotham’s newest frozen duo, with Black Canary, Condor, Batgirl and Strix caught in the middle. And it isn’t helping any that Dinah’s self-confidence and meta-human control is at an all-time low.

I’m not sure there’s much I can say here that’s going to sound positive. At the start of the New 52, Duane Swierczynski (previous series writer) created Starling to be the perfect foil to Dinah — sharp witted, a bit of a rogue, but full of heart and devotion to her best friend. She was spoken of in many circles as one of (if not “the”) best new character to arise from the relaunch. To say that all that has been completely evaporated in the course of three issues is not much of an understatement. Here, Ev is the dastardly villain, laughing at her former colleagues for not suspecting it was a ruse the entire time. If there was a railroad crossing nearby, I swear she’d be twirling a mustache with an evil grin. Marx’s dialogue for both Starling and the remainder of the team is so laborious and artificial-sounding: Batgirl tosses out trite insults while throwing punches; Canary bemoans her friend’s betrayal; Condor condescends to Canary about her resistance to use her powers. It all adds up to a terribly difficult read, where every character seems diminished by her or his own incompetence or patronizing behavior.

And that’s not what Birds of Prey is supposed to be. As a title with a long legacy of lifting up or showcasing strong female characters, it’s painfully hard to watch every one of them transform into stereotypes right before my eyes. And it’s not just the heroes. The inclusion of the Court of Owls — antagonists who were portrayed so majestically elsewhere in the DC Universe — seems to reduce them to “villain of the week” status. Their uniqueness seems wasted by their presence in the story, and it leaves me again to wonder how such a bright new concept for a revitalized universe could have fallen so far, so fast.

Romano Molenaar’s pencils here are a terrible match for Jonathan Glapion’s inks, which I enjoyed immensely during his run on Batman with Greg Capullo. Unlike previous issues, where Molenaar was finished by clean and crisp line, the characters seem nervously illustrated, with details falling away — resulting in a haphazard, rather than deliberate, anxiousness. Chris Sotomayor’s colors are bright and clean throughout as well, which works against any tone the inks could provide, and we’re left with three processes working completely against each other. There’s no cohesion to the art, and it’s a shame, because each of the three professionals are solidly talented and deserve a better result. They just aren’t the right combination. At all.

With the next issue crossing over with Talon (a book I have been enjoying quite a bit), I’m pretty torn about where to go next. Should I keep the title, holding out hope that the book featuring some of my favorite leading ladies gets back on track? Or should I drop Birds of Prey, knowing that nothing changes so long as readers continue to reward poor creative decisions with our dollars? I’m honestly torn.