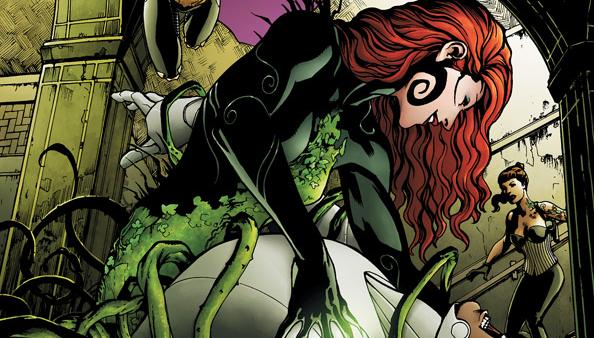 Duane Swierczynski, you’ve delivered again. Birds of Prey #6 is the solid continuation of what has been a great first storyline by Duane Swierczynski. He appears to be solidly in his wheelhouse as a writer, giving us a tale of intrigue, espionage and mystery that even after 6 issues still hasn’t fully revealed itself. The slowly revealed mystery in this arc has been tantalizing from the beginning and Swierczynski does a solid job in this issue of keeping the tension high without giving away the whole tale. I am still a little confused by the involvement of Batgirl, but the other Birds are more than interesting enough to drive this title forward. Any page Swierczynski writes with Starling and Canary is solid gold, the two characters are becoming more and more like the Butch Cassidy and the Sundance Kid of the DC Universe. This is the strongest team book I have read from the New 52 and I issue #6 is a continuation of Swierczynski’s strong writing.

Javier Pina fills in for Jesus Saiz on this issue and does an adequate job filling Saiz’s shoes. I will admit being disappointed when I saw a name other Saiz’s on the front cover, but Pina outshone my expectations admirably. Pina does a good job modifying his art style to flow with Saiz so that the tone of the issue is not a dramatic change of pace and the issue fits nicely with it’s predecessors. Some panels are not as crisp as others, to the point of characters not having faces in one in particular, but overall the pencils and script compliment each other well. This is another solid issue in what has been one of the best of the New 52.