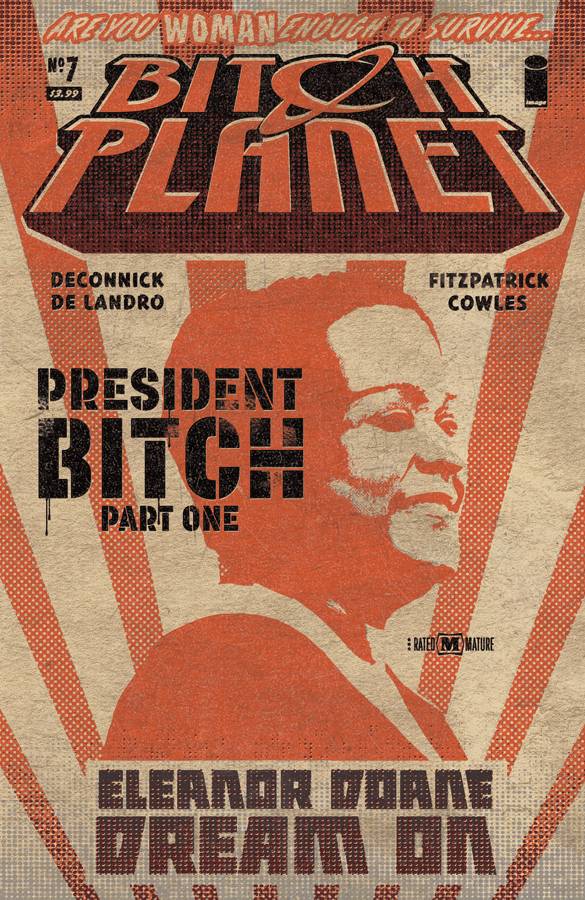 Issue #7 stands as the beginning of the second arc of Kelly Sue DeConnick and Valentine De Landro’s Bitch Planet and I don’t know if it’s due to the break in the main narrative with issue #6 having been one of the ‘special third issues’ that focused on a single character but issue #7 felt especially bleak. The kind of bleak that stays with you as you try to process what you’ve just read.

Truthfully, I never really know where to begin when I talk about Bitch Planet. it’s quickly became bigger than just a comic and already, it means so much to so many. Every single issue leaves me feeling like I’ve been punched in the chest, it’s basically a panic attack on paper. It makes me ‘burn the world down’ angry but only because it makes me incredibly afraid. The same kind of afraid I feel when a stranger – usually a white guy – shouts abuse across the street or thinks he can touch me without my permission or express any of the thousands of ways men are taught to assert their dominance over the existence of women.

I would like to pretend that these things aren’t happening but pretending doesn’t change the fact that they are. Every single day. Neither does it change the fact that Bitch Planet is one of the few comics that is actively and aggressively highlighting the ways in which women are constantly expected to comply or suffer the consequences,and sometimes, as evidenced in issue #7, comply and suffer anyway.

It is clear to anyone who has been keeping up with Bitch Planet that DeConnick is not pulling any punches. While our experiences are not always comparable our anger is the same. The only difference is that she has a larger platform from which to shout about it and she is taking it in her stride. DeConnick has created what is almost a parody of the patriarchy with Father Josephson and every line he speaks is filled with the self assured confidence of a mediocre white man who is convinced of his superiority. A superiority he holds like a weapon over all those he believes to be inferior. His characterization is even more pronounced when compared to Kam or Penny who have a strength that has been earned rather than gifted to them on account of their gender. And while issue #7 may not present either as convinced that strong is strong enough, it is their strength as individuals and as friends that will allow them to keep fighting.

De Landro’s loose line work softens the edges of the story and speaks volumes in the absence of dialogue or exposition. A tender moment between Penny and Kam, for example, is particularly affecting as De Landro strips back all unnecessary detail to allow the reader to focus in on the exchange and create a little hope in a universe where there is none. Kelly Fitzpatrick utilizes a fairly muted colour palette that matches both the subtlety of the artwork and the sheer lack of emotion that is shown by those in authority from the first page. Using the bright pink that readers have become accustomed to for the AI aboard the ACO allows it to stand out against the somber backgrounds, and accentuates the vision of perfect subservience.

Powerful, and heart rending, DeConnick and De Landro continue to stamp their feminist agendas on the pages of Bitch Planet as issue #7 lays the groundwork for the new arc without neglecting to pick up any loose ends from issues #5 and #6.