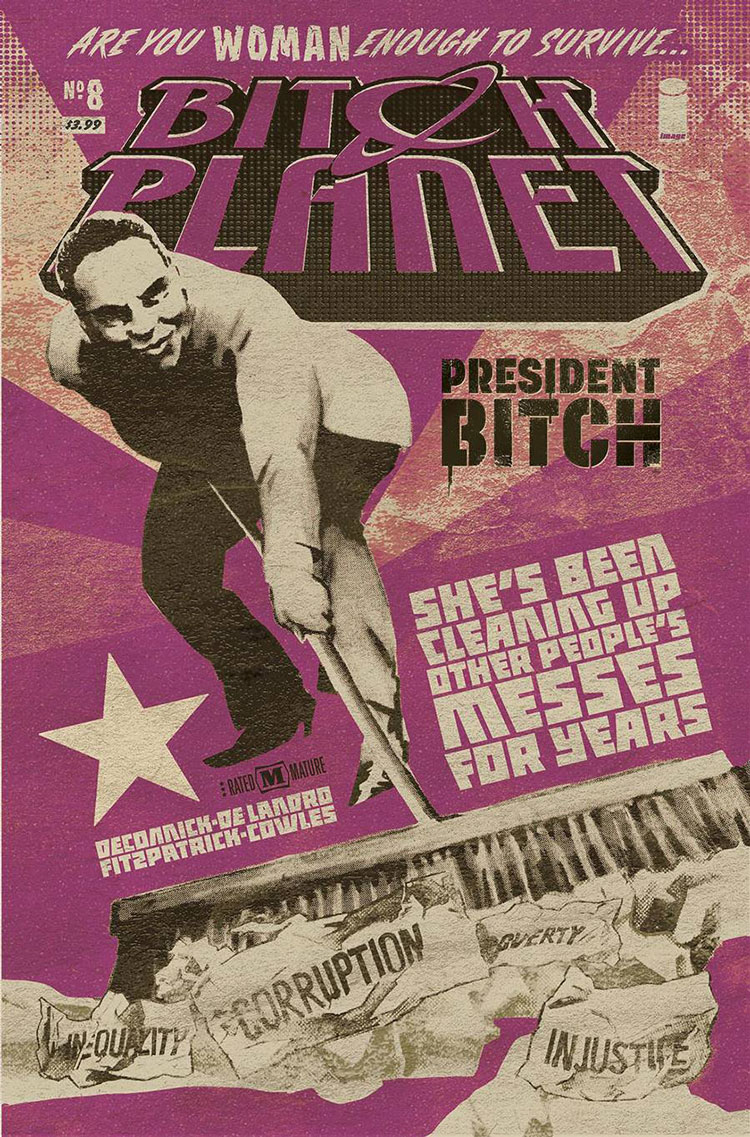 Kam has had a mission since arriving on Bitch Planet. Find her sister. And now, incarcerated with the jailer turned prisoner Whitney, she’s going to do just that. The only thing is, when you’re in the dark, you can’t be sure what you’ll find…

Bitch Planet is an education, y’all.

Truly, there is no other comic on the stands, or ever before, that I have found myself reading and rereading, cover to cover, from comic pages and ads to letter columns and essays. Not every word.

Yes, I’ve poured over Watchmen and Lazarus. An occasional issue of Brubaker’s latest. But not every issue. Not every word. Not between the lines, over the line, and underlined. Those titles, as rich and edifying as they may be, aren’t transforming my understanding of the world.

And with issue #8, an issue that will likely become known (for now) as “The Trans Issue,” Bitch Planet welcomes trans women Morowa Kogo and Rose to be noncompliant alongside the other denizens in its first pages. And in the first essay, writer Kelly Sue DeConnick welcomes trans writers to the creative process of the book in the role of consultants for this very special event.

Special, not in the sense of odd or outstanding for the book itself, as Bitch Planet has always been about women — all women — and the structure of society that oppresses in ways micro and macro. I think perhaps that when Bitch Planet #1 hit the stands, I believed this title to be an extrapolation of the micro to macro — an explosion of the minor into major to illuminate more clearly how broken our foundations are.

Today, a year or more later, I see it much more clearly. Bitch Planet is barely an extrapolation. It’s no metaphor. And it’s not nearly as far from reality as I imagined.

The women of Bitch Planet — all the women — are subject to this institutional mill that churns them through the system, scientifically analyzes and seeks to control their bodies, takes what they want, talking about them as if they weren’t there, and don’t answer when they call — even those with whom they granted power at one time or another.

These women, even in death, have their images controlled and idealized to conform to the notions the patriarchy expects of them. And anything that deviates, whether on the small scale of backtalk and obesity or the large scale of gender “falsification and deceit,” is subject to punishment. To incarceration. To correction. To being reimagined to fit the narrative.

Bitch Planet is the planet we live on. And this comic is your user’s guide, map, and call to action in one fell swoop. 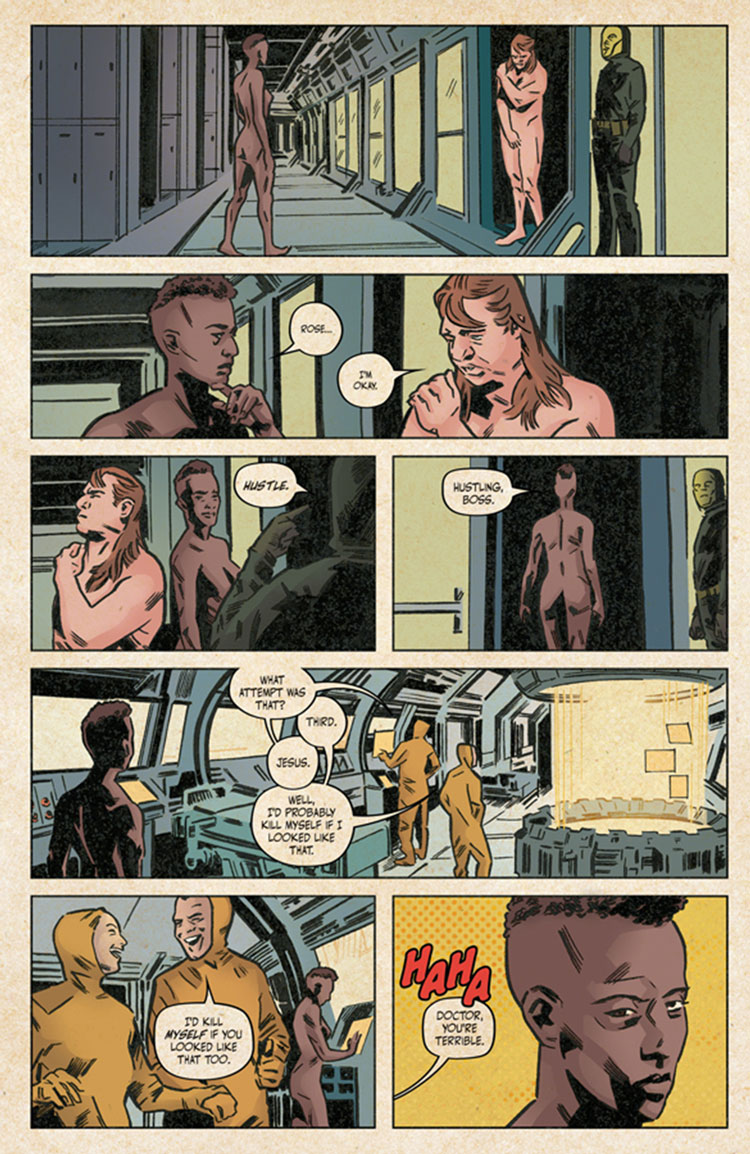 DeConnick, Delandro, and Fitzpatrick have introduced Kam’s sister alongside a group of other trans women who, like the cis women brought on planet in issue #1, enter this world naked and exposed. To Delandro’s continuing credit, these are not lurid scenes or exploitative, but still uncomfortable and exposing just the same.

This processing scene that we parse through Morowa’s perspective, that follows from the end of Rose’s invasive examination to the violent end of Morowa’s own, is its own microcosm of how trans bodies are discussed, pathologized, and defended, while also understood and negotiated in very different ways by the women who bear them themselves.

It’s hard for me to parse how much of its subtlety and sheer horror (mixed with absolute resignation) comes from a) Delandro and Fitzpatrick’s extraordinary illustration of the banality of exploitation or b) from DeConnick’s own pacing and understanding of the relationship between these two women and their objectification. As the writer says in a later essay, the nature of this story developed significantly due to the contributions of Aria Ehren, Emma Houxbois, May Valdiva Rude, and Nick Shadow. That’s a lot of hands in a pot that has produced perfection in combination.

Read this book. Read it from cover to cover. Do not skip the back matter. Do not gloss over the pain. Understand it for what it is. Bitch Planet is not fantasy. It is not science fiction. It’s fucking scary shit and it’s real and we need to prepare. And I have good faith that this is the title that’s going to make calling any one 30-page comic book “the trans issue” obsolete. This is where we start seeing all women represented, not these women and those women.

This is how you do it. This is your manual for seeing what’s right in front of you. And for not taking it anymore.