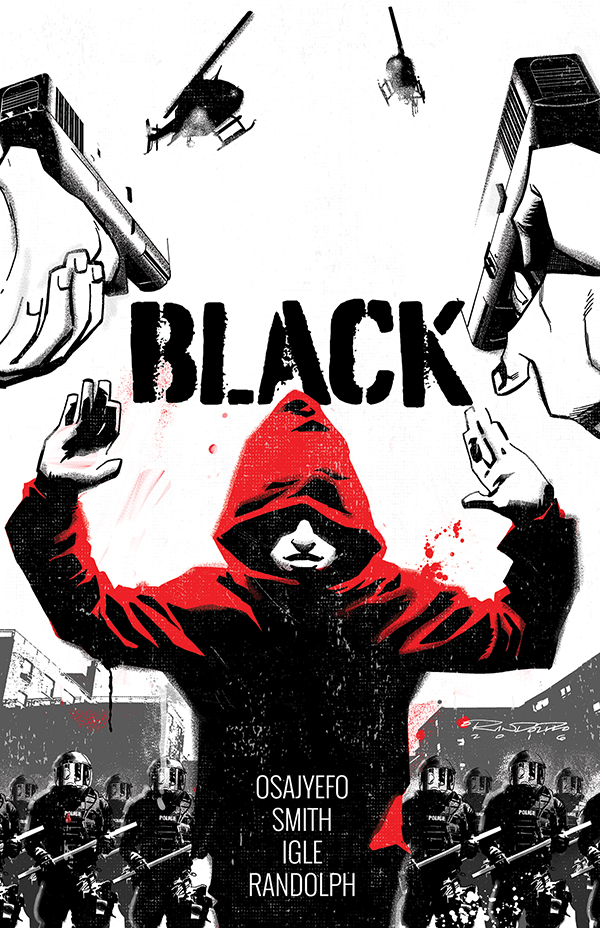 Imagine a world where it’s open season on you but the bullets don’t work.

Kareem Jenkins is the paradoxically fortunate survivor of police violence, his body struck down with two of his friends in an act of rage from a white cop. He finds that only he has awoken inside the ambulance, leading to a chase which guides him to a stranger who holds promise of protection. Kareem awakens in a new environment and begins his journey of self-discovery as shady white people lurk beyond the shadows.

Black’s premise is stellar, and it’s one that many people have considered in the past. Instead of a metaphor couched in whiteness, as in the X-Men, we have a direct example of what it may look like if only marginalized people, in this case black people, had superpowers.

However, I found the execution to be a bit underwhelming.

The story is there and it directly addresses police violence, especially a black man being inordinately treated as a threat, but that’s where that stops for me. For a series that is rather inherently political, it feels like it lacks nuance. I don’t think that a story with this backdrop has to be mutually exclusive from a deeper discussion, so what I’d like to see in the future is more exploration of those ideas. This is a place where “show, don’t tell,” may not cut it.

Kwanza Osajyefo’s world looks just like ours. It just so happens that a small portion of people are gaining superhuman powers and all those individuals are black. Moving from this premise, Kareem is instantly thrust into a world he never knew of, leading to interactions with a variety of people with information he isn’t privy to. Osajyefo’s world seems to be built on this clandestine knowledge, which amplifies Kareem’s confusion.

While I love the premise and the potential of world-building, I also feel as though the characters aren’t that interesting. They aren’t agents of their world so much as passive elements. There’s nothing striking about any of them based on personality, a detraction from the story. While Black #1 has the opportunity to dive into deeper topics and characterization, it feels relatively light where it could have been reasonably heavier.

Jamal Igle’s art keeps the characters from looking like carbon copies of each other. In a comic centered on a fantastical take on black people’s lives, such an element is vital, especially considering the entire comic is done in grayscale. Igle does the best at distinguishing between people in the story, which helps to save the plot. I like the attention to detail in the environment, the characters, and the dynamic scenes through the issue.

I also like the effect provided by Robin Riggs’ inks. These pages seem much heaver than others, even considering the opening scene, and they match the thematic pacing of the story. To add another layer, Sarah Stern works on tones, and infuses dramatic and soft gray shades to illustrate a world with many shades even if the colors are restricted.

I think Black #1 has a lot to work with, and I really can see it going somewhere. Yet, it has a little bit further to go to capitalize on its theme, premise, characters, and our current social narrative. Not all stories have to be explicitly political, but Black presents a situation where that’s almost necessary. I hope we get to see more of that in the future.