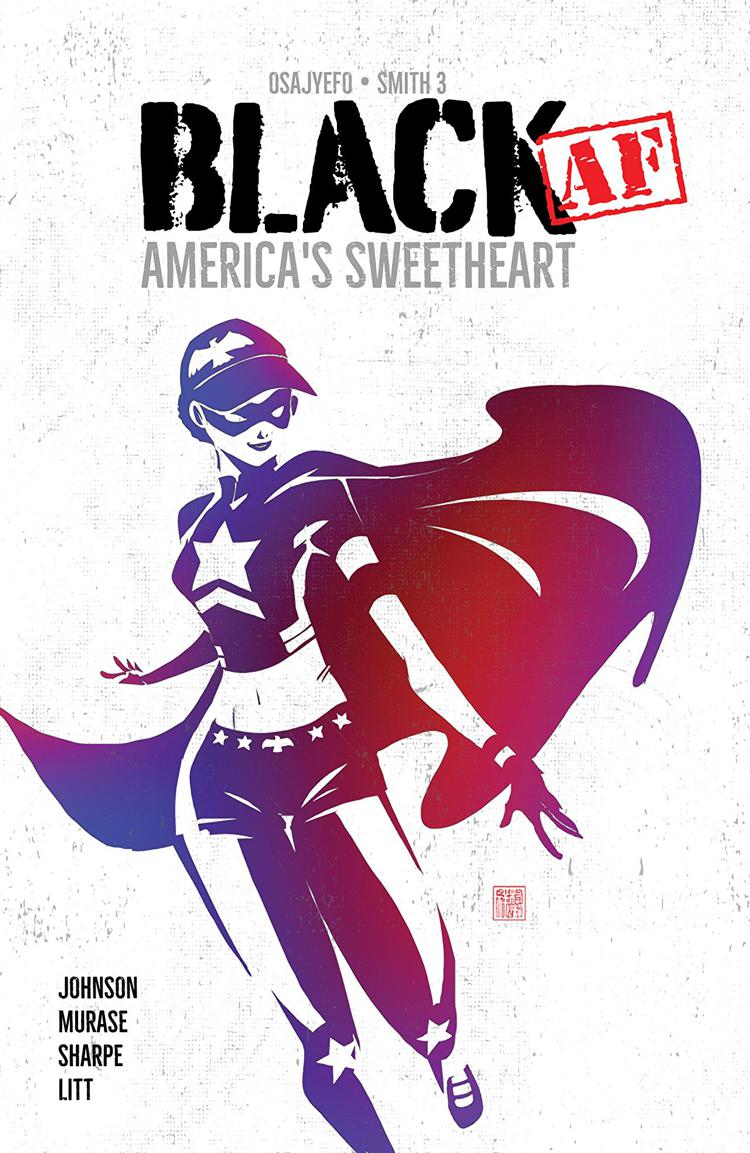 Hope will get you killed.

Eli has known for some time that she is special. Amidst the backdrop of cultural change surrounding the revelation of super black people, she is someone who sticks to her all-encompassing optimism. Yet, she will find herself faced with a dilemma that exists in contrast to her upbringing, the wishes of her parents, and that of family she didn’t know she had.

The opening of America’s Sweetheart is an immediate foray into the politics behind the Black universe. I like how the story starts on these notes, but through the story it becomes something that seems disparate than what this opening is trying to say. The comic is well constructed in terms of pacing and imagery, but it has issues with its execution of the narrative and the social politics that underlie its larger themes.

From transracial adoption to respectability politics, America’s Sweetheart touches upon many of the nuances surrounding black existence. The direct examples and the parallels work in tandem, turning a story that seems rather innocent into one that drives us to examine the particulars of our racial reality and confront the same atrocities that Eli struggles to contend with. However, while the story touches upon some key issues, there is also much to be desired.

Eli, Good Girl, represents a lighter tone of the future her sister, Zion, warned her about. By lighter I do not mean better. Eli’s use from the government focuses on making black people look ‘good,’ providing the ‘good’ example, being the ‘good’ one, yet all of these are firmly couched in the same kind of reasoning that white folks and white supremacy use when finding the ‘good’ example of black folks to decry the actions of ‘bad’ black folks (read: those who dare to speak up). While there could be a discussion regarding why Zion was right, the way the story ends does less to actually see these narratives for what they are and instead lands on a note that is bereft of a full and true understanding of the issues running through the story.

I will admit that the final moments of the story were not what I expected. Whether through the direct happenings or the symbolism embodied in the characters and their surrounding circumstances, there is a conversation that is not being held, one that could more appropriately touch on the unique situation presented in this story and its universe, as well as the world we live in. This story could have been one that, in a more complicated manner, dissected respectability, the convenient exception, and their relation to blackness, but it didn’t quite finish there. In fact, I’m not sure what this story set out to say.

Zion is a character who marks a major shift in the tone of the story and in Eli’s own development. She brings the most compelling aspect of the story with her, the fact that black folks with powers were engineered in the future, still used as tools for non-black folks’ gain. The dramatic turn is powerful when she arrives and is heartbreaking when she is gone. Yet, I feel the full impact of her presence is cut short and that what she represents, fighting against the powers of oppression and privilege and the complicated existence of black folks in America as both targets when we are ‘bad’ and empty paragons when we are ‘good,’ is not fully fleshed out but only a convenient narrative that ends up at odds with Eli’s assimilationist approach to society and heroism.

Part of this approach to Eli makes sense considering her parents. Not only are they white, but her father works for the government. America’s Sweetheart may approach these aspects of the story with a sense of awareness and sensitivity, but I don’t think it fully touches upon them for what they are or what they mean. For instance, Eli’s father’s marketing approach to her presence fits firmly within the paradigm of whiteness using blackness for its own ends. There is not much to be said for how the government uses Eli as a convenient image or how society views her as a convenient scapegoat. Rather than exploring these issues beyond Zion’s own assertions, this part of the story is left alone, and a part of this narrative that could have more adequately explored these ideas is missing where it could have been invaluable.

Eli herself seems to almost represent a colorblind understanding of the world around her. “So what if I’m black, I’m still a human being,” she exclaims against her sister in battle, a phrase that is startling for many reasons. She seems to be where the overtly political nature of this comic and those connected to it fall short in order to discuss an idea that serves no one and nothing beyond white fragility, especially black folks.

Kwanza Osajyefo does well in portraying the naivete and innocence conveyed through Eli. As the focal point, she becomes a certain lens in deciphering the events that unfold around her. By the end, she has just as many tools to handle the complex story within her existence, and so does the reader, which is not many. From a literature standpoint, this development is incredibly powerful, though from the analog of racism and oppression I do not think there is as much weight or utility once we reach the final page.

Jennifer Johnson’s interiors mesh well with the light, though still evocative, narrative running throughout the story. I like the restricted colors and the incredibly deliberate use of fine detail compared to the soft minimalism expressed in the visuals. Action scenes are resplendent, borrowing from the stylistic elements we see throughout the story. When color in particular seems to change, it fits the nature and environment of scenes that are meant to stand out. Johnson brings in a softness that is similar to Eli’s temperament, and that is where I feel the art and writing work best in terms of narrative synthesis.

This story is convenient, and it saddens me. While it looks stellar and is a visual exercise in the value of stylistic minimalism, it is convenient in a manner which does not completely address black issues, though it seems to have set out to tell a political story. It is convenient in a manner which supports white comfortability rather than challenging white supremacy. There is a lot of meaning and so much that could have been said, but the ending of this graphic novel becomes something that brings in heavily social themes but does not do much with them.