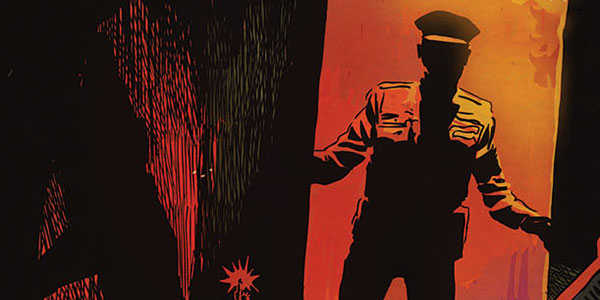 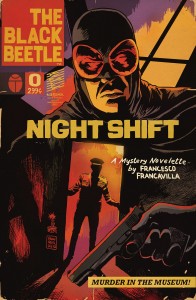 Nostalgia is a curious thing in 2012, because it no longer appears to be strictly connected to personal experience. Often my strongest nostalgic pining comes for material with which I couldn’t possibly have first person experience, but it speaks to me with a clarity and beauty that seems stronger than possible with a mere shared cultural consciousness.

That’s my fancy way of saying I’m not sure why I feel a wave of pleasure in familiarity from Dark Horse Comics’ Black Beetle #0, but I’m sure glad I do.

Francavilla, who alongside Jock illustrated a darkly gorgeous run on Detective Comics in early 2011, works his magic again to set a scene so perfect for its protagonist I can’t help but marvel over every panel and page. On the first page of chapter one alone, Francavilla manages to build up tension with a simple camera zoom and the ever-increasing size of a sound effect to great effect. Once the page is turned, I was literally taken aback by the source of the whirr, as if a blast of air itself had hit me violently in the face. Throughout this introductory story, in fact, precisely crafted pacing genuinely sets the mood of mystery and danger, so that it’s difficult not to feel fully immersed in what the characters are experiencing first hand. Perhaps because this story is actually a compilation of three short chapters told in anthology form, Francavilla truly understands the economy of excellent storytelling, both in character movement and illustrative detail.

Framing scenes in moody background shadow and bright, directed light, Francavilla’s characters feel like they’re moving through a space where there literally could be danger around every corner. The fine, carefully chosen line is brilliantly paired with large color blocks of sedate colors, every so often punctuated by the boldest red possible. From the Black Beetle’s googles and chest insignia to the blood exploding out of a Nazi opponent’s shoulder once shot, the crimson offsets the otherwise anachronistic palette to remind the reader — yes, there is real danger here, despite a distance of nearly 70 years.

Pulp heroes are, of course, making quite the comeback in comics these days, but Black Beetle stands up strongly against his senior counterparts The Green Hornet, The Shadow and The Spider, and is beautifully reminiscent of a more recent, but currently absent, creation — The Blue Beetle. An original creation of the artist, Black Beetle captures so much of what we love about feeling nostalgic for simpler times — where dialogue may be a little more blunt, but it came through a magic sound box called radio, so it mezmerizes us nonetheless. With original stories beginning next month with a four-part tale subtitled No Way Out, Black Beetle is guaranteed to satisfy any reader who wants to experience a little bit of that nostalgia you didn’t know you had. It seems the best things in comics, like life, are simply timeless.