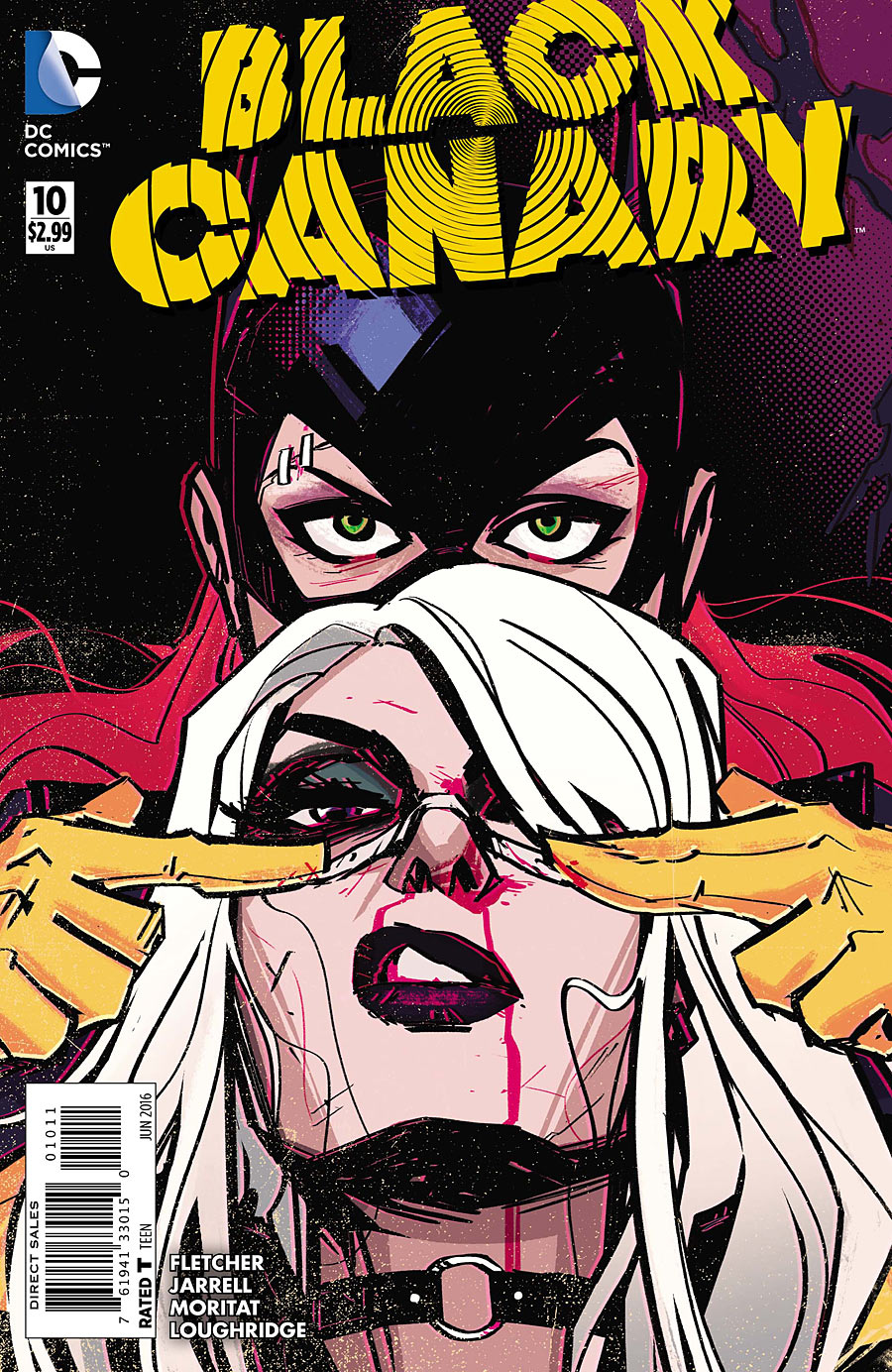 Black Canary caps off a two issue stint in Gotham that brings us back to the present to squeak in a little down time with Babs, examining just how much things have — and have not — changed for Dinah since signing the record deal from Hell.

It says “Black Canary” on the cover of this issue, but it’s really a fifty-fifty split between a Batgirl of Burnside story and a proper Black Canary one. Moritat stays on board from last issue to bridge the past to the present with a montage of YouTube clips of a Black Canary show, but that particular device is more of a Burnside mainstay and a big aesthetic shift for Canary’s lo-fi aesthetic. It’s a shift that works almost subliminally because Brenden Fletcher is on both titles and all it takes is a slight pivot on his part to pull off.

The books have cross pollinated a few times, but this is a particularly important one, touching base for the last time before DC’s Jordan/Pippen/Rodman depart the titles. So there’s a lot to be said for and about the choice to use a specifically Canary inflected artist to tell a Burnside story that segues from a YouTube montage to taking emotional inventory whilst lounging around on Babs’ bed.

It’s long been Babs’ emotional bleed valve with Frankie, but there’s a welcome and endearing girlishness to it that has never marked her relationship with Dinah before. We’ve gotten a lot of aspects out of their relationship over the years from wariness to sushi sharing and even stridently unintended homoeroticism, but as far as I can recall flouncing around like teens at a slumber party is a brand new one.

It’s also a fun reversal to Dinah’s original arc within the Burnside run. Their heart to hearts there were all done the Canary way with rooftop sparring and tough love. Dinah has changed a lot since being introduced as the cranky bird on Babs’ couch, so it’s fitting that she returns in her own series to be the one on the proverbial couch instead of the literal one. The story stays firmly in Burnside mode from there as they fight it out with a costumed criminal in a record shop.

The thing about the Burnside villains, the ones created by Tarr, Fletcher, and Stewart, is that instead of being in the classic Batman mold of embodying specific neuroses, they’re all hobbyists consumed by their interests. They’re all giant nerds like Babs, really. The biker girls and their anime, Dagger Type with his diva worship, the programmer bros and video games, even their reimagining of Livewire as a YouTube prankster/beauty blogger.

When things return to a more explicitly Canary footing Sandy Jarrell takes over, putting us deeply back into home turf as the real meat of the story kicks off. A lot of loose ends are being tied up as the title gears up to end its second and final arc, but these aren’t exactly plot points so much as they are themes and motifs consistent with the DNA of the series.

Just like the dynamic between Babs and Dinah since the debut of the Burnside run comes full circle in the opening pages, the continuum between dance and martial arts practice circles back around for Dinah. The discovery that her mother had been a back-up dancer for a musician her father was investigating as a PI forces the realization that Dinah’s been more enmeshed in the family business than she ever imagined. It’s particularly amusing in light of how she starts off the issue by trying to pass off her time in Black Canary as nothing more than a cover for her other activities when presented with Babs’ fannish enthusiasm.

One of the most fun things about Black Canary has been the interplay between the artists and the rock solid stylistic continuity between them defined more than anything by their idiosyncratic inking. It’s pretty inarguably Jarrell whose thin, angular lines align the closest with Annie Wu’s, but Moritat and Guerra draw down just as much attention to that aspect of their style as the others. (It’s a shame that Guerra didn’t get a spot on this issue given that including the cover, it would have united all four contributors under one roof. Fingers crossed for the finale!) There’s a particularly fun interplay this issue between Moritat’s flowing inky lines and Jarrell’s sharper ones that really serves to emphasize the worlds within worlds the story takes place in, particularly in their fight scenes.

The flow and curve of Moritat’s work emphasizes the sleek, widescreen oriented action more typical of Batgirl. Jarrell’s rigid lines work to drive the snapshot quality more inherent to Black Canary, mirrored by the intimately broken down page layouts — that capture the fight as close to being move-by-move as you’re likely to get in a monthly title.

Annie Wu, in a panel at WonderCon this year, described her approach to action by studying film, an approach that Fletcher and Jarrell have more than a little passing familiarity with judging by how much of it is retained in her absence. For all the obvious similarities (and what gets retained across the title as the art team rotates), one of the most interesting things about the construction of the series is that there are very unmistakable shifts in page layouts as the artists shift on Fletcher-penned issues. How much of it is down to Fletcher’s adaptability to their input or his understanding of their individual strengths is purely a matter of conjecture, but the result is one more in a long list of reasons to go back through previous issues and find a whole new reason to dig it.

The snapshot quality of Jarrell’s fight breakdowns and their rigidness do require a bit more explanation to fully appreciate though, because there’s a world of difference between the early to mid 00s fetish for hyperrealist artists to draw page after page of five panel stacks of figures that come off looking like a Damien Hirst installation and what Jarrell achieves here. These are small, intimate moments in a very coherent sequence of events. 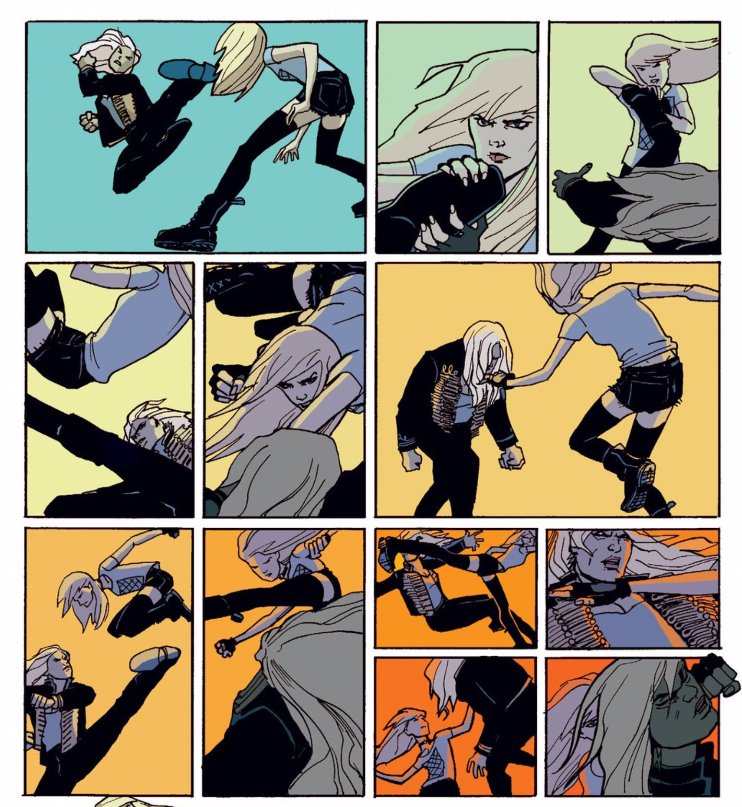 Where Jarrell really goes off is on page 19 in the middle of a fight between Dinah and her aunt. At first it looks almost identical to how Wu would approach a sequence like this and it has the same intuitive flow as Wu’s art, but they arrive at it by very different means. In my review of the first trade, I delved into how Wu uses breakdowns of frequently used shots in film to trick the mind into completing the image. Jarrell does something much different and native to the comics page, but just as effective.

Across the first row of panels he keeps the flow going across sharp changes in perspective by using a foot as the central focus of each panel. In the second row it’s the momentum of Dinah flipping around, keeping a tight focus on her movement to balance the same rapid shifts in perspective. Rounding it out with the third is the trickiest one, using Dinah’s leg — at three distinctively different points in time — to lead the eye in an arc from start to finish. All the while Lee Loughridge moves through a full spectrum of colors, gradually intensifying the hue to communicate the pace and intensity of the fight right up to the knockout punch.

At this point I’ve written thousands of words about this series since its debut, shamelessly double dipping with a review of the first trade, and while I endeavor to tease something specific out of each issue it always comes back to the same conclusion. Black Canary is the current benchmark for greatness in monthly comics.