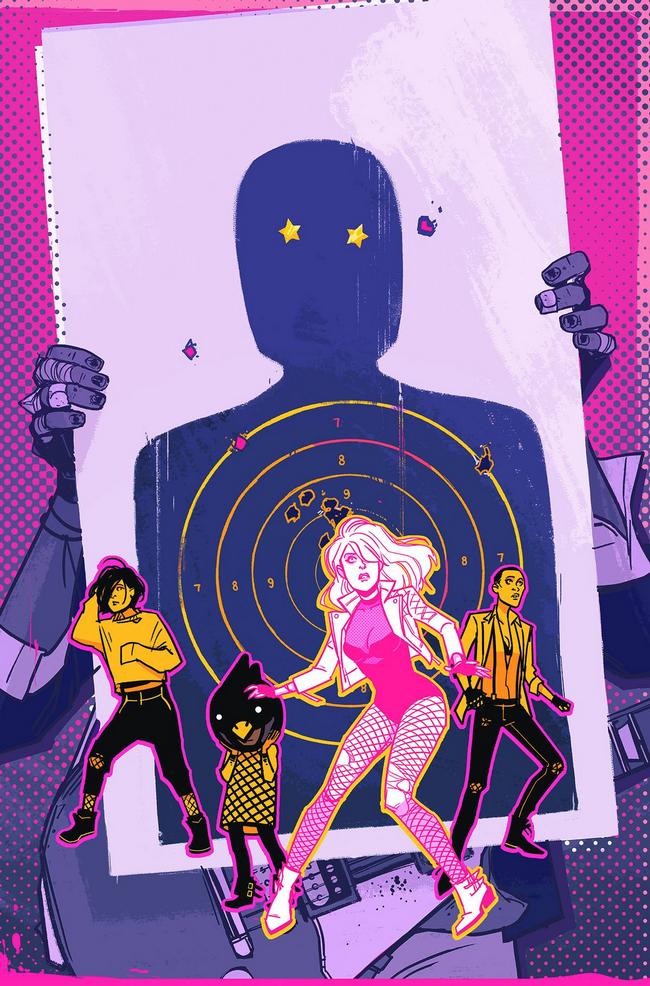 DC’s rock band on the run continues their training with Dinah as the threat to Ditto comes closer than ever.

This comic is like a great rock song, with each member of the creative team carrying their weight and kicking out a sweet jam. Annie Wu’s artwork is rock solid, with great style and she drives the issue forward like an unstoppable drummer crashing it out. I’m not talking some generic drummer, here. I’m talking Bonham, Grohl, Peart – the drummers that when you focus in and listen to just their work, you are astounded. That’s Annie Wu’s artwork and storytelling in this comic. There’s so much style in her artwork, but also an excellent flow to her storytelling and a ton of detail. Her panel layouts are fantastic and her art is completely engaging. Through the visuals alone, I care about these characters. She handles moments between Dinah and Ditto especially well, and a new character that is revealed in this issue leaps off the page. Wu captures her attitude perfectly, and this is just a damn good looking comic.

Wu’s artwork drives this comic forward like a freight train, and Lee Loughridge’s colour work brings the flair like a great guitar solo. He captures the style and edginess of Wu’s artwork perfectly and adds a spin that makes this comic very unique in the superhero game these days. Shifting palettes within panels is visually intriguing and, like when the drums are pounding and the guitars are wailing, the total package just works together. Steve Wands’ lettering is even strong, and yes, I’m going to call the letterer out as the bass player. Not cause bass isn’t cool – bass is cool – but because bass is the unsung hero of any great rock song. Wands’ work is solid and doesn’t take away from the art team tearing it up as they play off of each other.

Brenden Fletcher’s the guy up front swinging the mic and screaming out some damn fine lyrics, with some remarkably sweet moments throughout the issue. His dialogue is great, and I like the direction he and the team are taking this story. Dinah’s mysterious past is perfect for this character, and band drama/infighting brings a team dynamic to the book without having it be overrun with powers. Fletcher is building the relationship between Dinah and Ditto brilliantly, and he channels the attitude of the new character mentioned earlier very well. Like any good vocalist, Fletcher knows when to not over sing the tune, and he works very well with Annie Wu. There are moments that just don’t need dialogue, and that’s where this collaboration really shines. There’s an obvious trust between Fletcher, Wu and the rest of the team and this comic feels like a tight package created by a crew of talented storytellers who are all on the same page.

Alright, I’ll stop with the rock song metaphors now and just say it like it is: Black Canary #2 is a damn good comic. Fletcher, Wu and Loughridge are giving readers a stylish book with a lot of heart (and some action too). While this issue isn’t as overtly punk rock as #1 was, the spirit is in there and the band dynamic is very interesting. The fact that I don’t have #3 in my hands already pisses me off, cause I want more as fast as I can get it.